Laurel Jessamyn Lovell
Allsun with Chef Knife' from the series Catastrophe Crisis and other Family Traditions, 2003 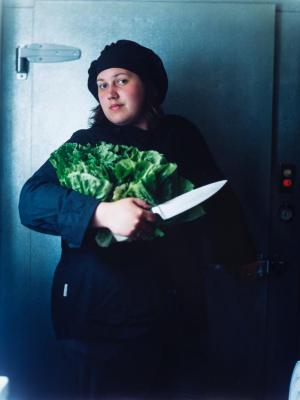 Jessamyn Lovell lives in Richmond, CA and participated in Light Work’s Artist-in-Residence program in May 2003.

At some point in all our lives, we must negotiate the marks of family, separating out what is ours and what is theirs, and finding ourselves in the space between. For Jessamyn Lovell, this negotiation is photographic and her ongoing series, Catastrophe, Crisis and Other Family Traditions, is a potently intimate look at the complicated territory of familial relationships, where deep and unconditional love is faced with frustration, anger, and disgust at the stresses and strains of a family life organized around illness and poverty.

Lovell has been producing work around her family for nearly ten years, and began while studying at the Rochester Institute of Technology as an undergraduate. She is the least objective of observers and admits "there were times I was actually looking through the lens shooting while in screaming matches with my mother or sisters," but feels that this has taught her not to be dependent on her camera to mediate these relationships. Her images, while documentary, are also diaristic, inhabiting the space of skin both inside and outside of a body. They are defined by the complete subjectivity of her viewpoint.

The series maps the landscape of Lovell's family life. Each member is detailed-Mommy, Ariel, Allsun, Klare, and Myself, as well as figmentary members such as The House and The Animals. It is a telling choice to organize the work into these discreet categories. It acknowledges the singularity of each person, but also implies a struggle for individual identity as central to the family structure. The one exception is Ariel. He is the adopted Asian brother visibly scarred in an accidental fire. He is this family's internal other, providing a marker against which the others gauge themselves. He does not need to struggle for his identity. Ariel is always with the animals, almost always outside the house, most often, alone.

The family revolves around Lovell's mother, and her story lies at the center of it. Lovell says that the work "traces the residual effects of my father leaving when I was eleven. Things were really bad for several years." This is the start of a downward spiral into physical decline and poverty. Her mother, a nurse, becomes disabled from a back injury that does not heal. She cannot work, therefore providing no stable income. The family becomes homeless for a time, living with friends. Finally, they move to the house-a 'pre-fab' home on permanent foundations-but pain, depression, frustration, and "catastrophes" continue to define family life.

Lovell describes the house with almost obsessive care, as if her photographs could impart to it an order it seems to resist. A triptych fragments the structure into three frames giving it the appearance of being excessively large and dominating. The image encapsulates a kind of neurotic chaos that seems to pervade family life. Like Poe's House of Usher, it has become more than a structure. It has become an embodiment of the life within.

However, the work that Lovell produced during her Light Work residency shows in increasingly apparent turning point. The photographs have changed-she is now working on portraits of her family that are more formal and composed. They are no longer the reactive images presented in her earlier work. There is something quiet and studied in these new images as if they represent new ways of being. Several of them show her mother outside instead of, as previously, almost always in her room. She has more independence, in part due to the gift of a new wheelchair. But it is more than this. Lovell's family is changing. They seem to have escaped an immanent requirement of families-that they remain what they have always been.

Instead, this family has given each other the breadth of space to move on. And in the space that's opened up, Lovell sees herself in the reflection of her family. She states, "In the past year or so since my sisters have moved out of my mother's house. I tend to make more self-portraits and images of the environment. There is less action and I am forced to turn to see how much the work is about me. It always has been about myself, but now I think it is more clear to me how much of myself is in the work."

Jessamyn Lovell lives in Richmond, CA and participated in Light Work's Artist-in-Residence program from May 1-30, 2003.

Alicia Miller is a former associate director of San Francisco Camerawork and current head of education and public events at London's Whitechapel Gallery.