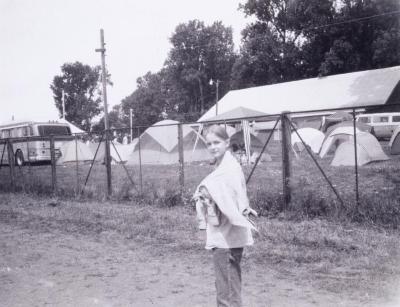 In 1997, Julie Magura (Trumansburg) moved to the Finger Lakes region to escape the fast-paced, city life of New York City. Since then, she has been making photographs with an early 1970s Polaroid Land camera. The images in this series are portraits and landscapes of areas within the Finger Lakes region of Ithaca, NY. Over the past five years, Magura created a singular style that combines a snapshot aesthetic with the unique, and often unexpected, results of the Polaroid camera. Of her work she states, 'By using only ambient light and documenting people and situations as they occurred, I developed a refinement and gradual understanding of the nature of the camera's aesthetic. The images are valuable in themselves as they are [unable to be reproduced], lacking the traditional silver negative(s).'

Magura received a BFA in documentary photography and printmaking from Rutgers University in 1993. She is actively involved in mentoring youth in the Ithaca community and currently works as a free-lance photographer. She has displayed her work in many group exhibitions including the State of the Art Gallery Juried Photo Show, and State of the Art Gallery Members Invitational, 2002 in Ithaca, NY.