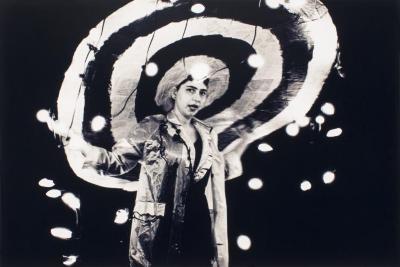 For the past twenty-eight years Light Work has been awarding three $1,000 grants every spring to photographers, photo-historians, and critics who reside within a fifty-mile radius of Syracuse, NY, making the Light Work Grant one of the longest running photography fellowships in the United States. While many of the programs at Light Work bring artists from around the world to Syracuse, the Light Work Grant program seeks to provide support and recognition for artists in Central New York. This year, Light Work awarded the twenty-eighth Annual Light Work Grants to Vivian Babuts, Julie Magura, and J.P. Crangle and Chad Reagan.

Since 1995, Vivian Babuts (Syracuse) has been photo-graphing avant-garde women performers and the underground, alternative venues in which they perform. Captured in the midst of their performances, these female performers challenge the structure of society and create a context to express their art by experimenting with gender representation. Babuts feels that these women are creating some of the most poignant, smart, and transgressive work in contemporary art today. She states, “These photographs are a rare look at the expression of radical women artists and the space they inhabit. Their work is the avant-garde of today and through these photographs I hope to capture the expressive force of their art and their lives, as well as document this important underground culture.”

In 1997, Julie Magura (Trumansburg) moved to the Finger Lakes region to escape the fast-paced, city life of New York City. Since then, she has been making photographs with an early 1970s Polaroid Land camera. The images in this series are portraits and landscapes of areas within the Finger Lakes region of Ithaca, NY. Over the past five years, Magura created a singular style that combines a snapshot aesthetic with the unique, and often unexpected, results of the Polaroid camera. Of her work she states, “By using only ambient light and documenting people and situations as they occurred, I developed a refinement and gradual understanding of the nature of the camera’s aesthetic. The images are valuable in themselves as they are [unable to be reproduced], lacking the traditional silver negative(s).”

Magura received a BFA in documentary photography and printmaking from Rutgers University in 1993. She is actively involved in mentoring youth in the Ithaca community and currently works as a free-lance photographer. She has displayed her work in many group exhibitions including the State of the Art Gallery Juried Photo Show, and State of the Art Gallery Members Invitational, 2002 in Ithaca, NY.

J.P. Crangle and Chad Reagan (Syracuse) submitted a collaborative project of prints made from glass negatives Crangle discovered in his mother’s attic. Immediately intrigued by the find, Crangle enlisted the help of Reagan to contact print the negatives. Through research and study of the prints, they determined that the negatives dated back to the early 1900s, and could possibly have belonged to a man named Charles Brown. Brown, who appears in many of the images, was a distant relative of Crangle’s, being related by marriage to his grandmother. The pair also discovered that Brown died of his own hand, leaving behind a fascinating glimpse into his life and a photographic history of St. Johnsville, NY at the turn of the century. Crangle and Reagan have future plans to create a website for the project, in hopes it will attract more information on the history of St. Johnsville.

J.P. Crangle is an artist, illustrator, and art educator with degrees from Rochester Institute of Technology and Syracuse University.

Chad Reagan is a photographer and filmmaker who studied at Rochester Institute of Technology. He has exhibited his work nationally.

We congratulate the grant winners and wish to thank our three grant selection panelists: Deborah Jack, a photographer and visiting professor at University of Buffalo; Julio Grinblatt, a photographer and artist based in New York City; and Sunil Gupta an artist, photographer, and curator in London, UK.