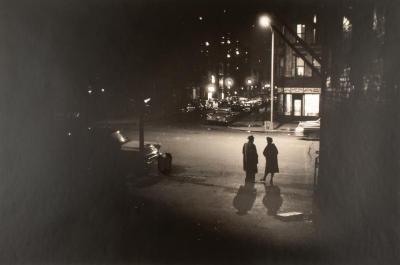 Alex Harsley is a photographer and experimental videographer, founder of Minority Photographers Inc (est 1971) and The 4th Street Photo Gallery (1973) of NYC’s Lower East Side. His collection and experience continues to be a container and witness to the resonant and fractal nature of time, change and human nature. He started his career as the first black photographer for NYC’s District Attorney in 1959. His gallery space remains as one of the few POC owned and operated artist spaces in the Lower East Side. He continues to serve the community as a mentor and for young artists and as a documentory of the history and lineage of photographic technology and the changing city itself. Harsley participated in Light Work’s Artist-in-Residence program in April 2004.

Any consideration of Alex Harsley must take into account both his long evolving artistic practice and the key role he has played as director of 4th Street Photo Gallery. He has lent a degree of coherence to an otherwise loose-knit group of artists in New York for over three decades. Certainly the trajectory of his own career as an artist has been shaped by his ongoing decision to provide a platform and forum for other artists, particularly at a time when few other support structures existed.

What is interesting to consider in looking at Harsley’s pictures is how this one photographer came to such a sophisticated sense of pictorial form while working in virtual isolation. That is to say that at the moment the earliest pictures on these pages were made, Harsley was not part of any viable photographic community. He knew no other photographers and therefore had no one with whom to share these pictures with or with whom to take the measure of his own success as he sought to give a sense of coherent and dynamic form to the urban experience of New York City. Henri Cartier-Bresson’s The Decisive Moment had been published in 1952, some seven years before Harsley made most of this work. Harsley was unaware of this seminal book and yet was able to create a series of pictures that also made full use of the small hand-held camera’s ability to be an immediately responsive extension of the photographer’s eye.

These pictures are interesting too not only for their sense of rigorous and quickly articulated form, but also for what they say about the evolving social conditions of that historical moment. In “Madison Avenue and Harlem Street Scene” Harsley displays a keen eye for both the formal and social circumstance. The children splayed casually in the streets suggest a time of carefree innocence when children played stickball and other urban street games without fear of being run over by aggressive vehicular traffic. The clear description of individual gesture evinces an astute sense of timing on the photographer’s part, while his use of dramatic light and shadow imparts yet another layer of visual and metaphorical drama. Likewise the people assembled on the corner in “Madison Avenue,” made from a passing bus, demonstrate a simultaneous awareness of the formal and social drama unfolding. While the subjects in this photograph are each caught within the moment of multiple unfolding little dramas and gestures, there is a strong hint of social deterioration as well. The Spotless dry cleaner is an ironically signifying shadow of itself, as we notice the debris accumulating in the gutter. And certainly in Harlem, where this picture was made, in previous decades no self-respecting adult would be found lounging on the curb of a garbage strewn gutter at will. It appears that the innocence implied by one photograph is indeed belied by the more caustic evidence of the other, since both were made during the same year.

An aspect of both intimacy and foreboding permeates “Harlem Night,” yet another photograph from 1959, and this intimacy and emotional warmth is given full reign in “Central Park, Lovers.” Less than two decades later in “Lower East Side, Essex Street” all that appears to remain is the desolate urban environment under police surveillance. These photographs can only hint at the vast body of work that Harsley has compiled that notes with great emotional resonance and insight the changing nature of the urban experience in America as exemplified by one city.

And then there is 4th Street Photo Gallery. Located for some thirty years on the same stretch of urban pavement between the Bowery and Second Avenue in the East Village, this inconspicuous storefront gallery cum meeting space has been a quiet locus of activity, providing numerous photographers with their earliest opportunities to put their work on public display. Indeed 4th Street, as it is commonly referred to, has often seemed to be something more akin to the neighborhood barbershop. In the Black community, one goes to the barbershop not only to get a haircut, but to engage in the social repartee that usually takes place in that enlivened social space. And so it has been at 4th Street. While the ostensible business is the business of exhibiting photographs, habitués also know that a few minutes spent there will usually find you engaged in a lively exchange with other regulars who are just as likely to drop by. Of such things are communities made, and from such encounters do new communities spring.

Alex Harsley lives in New York City and participated in Light Work's Artist-in-Residence program in 2004. His Web site can be found at www.4thstreetphoto.org.

Dawoud Bey lives in Chicago, Illinois, and participated in Light Work's Artist-in-Residence program in 1985. He is currently professor of photography at Columbia College Chicago.