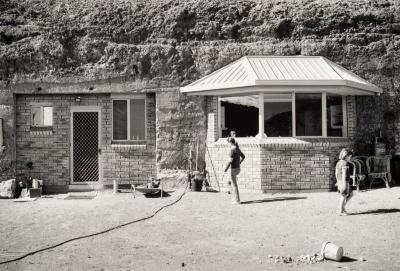 For a more recent CV or bio please visit the artist's website, waynebarrar.com

Billed by its tourism promoters as Opal Capital of the World, half of South Australia’s Coober Pedy township of 3,500 inhabitants live underground. The Aborigines, Australia’s original people, call it “kupa piti,” translated as “white man in a hole.” Carved out of a vast Mars-like landscape of red rock unchanged for millions of years, it has been an opal mining town for nearly one hundred years. The first underground homes were built by World War I soldiers returning from the trenches in France.

Wayne Barrar’s photographs of Coober Pedy record its replication of suburbia in the harsh Outback environment as part of his ongoing series “Home Range”. The settlement is extraordinary, not because it is built underground, but for its insistent maintenance of domestic conventions in such extremes. This work restates Barrar’s view of suburbia as “the ultimate human landscape determined by its people.” French philosopher Gaston Bachelard describes the house as “our first universe, a real cosmos in every sense of the word.” He sees its chief benefit as a sheltering site for dreaming and the bedroom as the “original shell” and “large cradle” where people take root.

“Underground Catholic Church, Coober Pedy, Australia”, 2002, goes to the heart of the matter: “Subterra” as a psychically-charged space. This is the archetypal cave, the cosmic cellar, echoing the first clandestine gatherings of Christians in Roman catacombs and ritual performances in Stone Age caverns. Despite banal vinyl chairs, the elemental walls and minimal religious props and lighting feel totally congruent with the simple intimacy of communal worship.

“Large Underground Bedroom, Coober Pedy, Australia,” 2003, however, appears to eschew dreaming. Its poetics are spare and desiccated. A carved niche connotes intimacy and a window admits some daylight. Otherwise the room’s material and psychic weight seem repudiated. A white dresser and two smooth white stands backed against rough rock add to a sense of dislocation. Hanging behind the floral padded bed is a clichéd Far Eastern desert scene of camels and exotic riders, in ironic juxtaposition with its setting.

American New Topographics photographers in the mid-1970s and their approaches to the man-altered landscape have remained a touchstone for Barrar. His book “Shifting Nature” (2001) examined relationships between post-colonial, industrial man; the original people of the land, the Maori; and the natural world. He is one of few New Zealand art photographers to focus on landscape as a culturally mediated zone in this small South Pacific country, which is surprising given the primacy of landscape in its bi-cultural history. His approach has proven readily transferable to international environments. Since 1999 he has had residencies in Nevada, Utah, and Iceland. Barrar treats the relationship between people and land as central and vital. His clarity of recording on the “modified margins” shows us that relationship heightened and intensified.

Barrar is conscious of photography’s implication as a colonizing agent in framing views that imply ownership and control. In its re-framing of a new house stenciled on a wall, “Drill Line, New Underground Dwelling, Coober Pedy, Australia,” 2003, underscores this historical relationship, its pathos more potent for its restraint.

In a cultural flip, the dotted lines infer a local context of belief and art. Sophisticated modern Aboriginal dot paintings were traditionally executed in sand on bare earth. Known as “Dreamings,” they show creation myths, tribal territory, knowledge, and genealogies and have been much celebrated by Western art collectors since the 1970s. If we consider “Drill Line” as a European “Dreaming,” its limited geometries reflect Western conceits about land. “Underground House Frontage,” 2003, and “Room Frontage (Underground),” 2003, return us to a finished facade, with children and bikes completing the sense of spiritless suburban ennui.

The Coober Pedy work is an interior corollary to Barrar’s earlier critiques of the Western relationship to the natural world. It signals the persistence of human habit and the poverty of its imagination. Barrar presents a quietly passionate engagement with the poetics and the politics of space.

Janet Bayly lives in Wellington, New Zealand, and is a photographer and curator who teaches at Victoria University, Wellington.