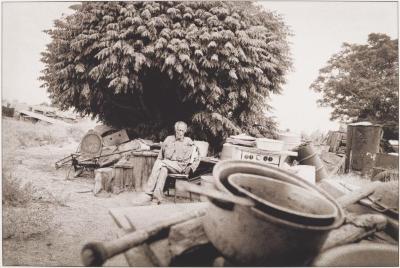 For a more recent CV or bio please visit the artist's website, http://www.mattblack.com/

Sometimes referred to as "the forgotten middle" of California, the Great Central Valley, which extends north to south nearly 450 miles between the Coast Range and the Sierra Nevadas, is one of the most prodigious agriculture regions in the world. For over one hundred years it has drawn waves of settlers from abroad-Germans, Swedes, Armenians, Filipinos, Mexicans, and Hmongs. Many of these immigrants arrived as exiles from their native countries, dreaming to rise up in the Valley's fertile fields from out of the ashes of their past. Here they hoped to find a new Eden.

Other groups arrived to the Valley from within the United States in what amounted to an internal exile. From the books of John Steinbeck to the photographs of Dorothea Lange, the Oklahoma Migration in the 1930s was one of the most well-documented migrations in United States history. But little is known of the Black Okies. By hook or crook, some 40,000 self-named "Okies" made their way into the Central Valley before and after World War II, hoping to deliver themselves from their economic bondage as sharecroppers, and to leave behind, once and for all, the hounding racial prejudice of the South. When they arrived they saw nothing but land with hardly a building to pause the eye. For some, they might as well have come to a wasteland; for others, the seas of cotton that seemed to extend to the very ends of the earth guaranteed a livelihood, a good one, and combined with the honest pace of country life, the big sky and abundant air, it also promised a future.

Close to the earth, and far from the cities, they raised a community around churches, baseball games, and picnics. They graduated from makeshift tents, to shacks, to bungalows. But the bigger dream-the three-bedroom home on a working farm they could claim as their own-never materialized. Some said the scale of the farming, which thirsted for mechanization, was inevitable. Some say it was simple greed by the Cotton Kings for ever-greater profit margins. In either case, pickers would be out of work within a generation, their communities bankrupt, their lives upturned by mammoth harvesters that gathered up in a cool six weeks what took four months to pick by hand. When the work dried up, so did the dreams of the many who left to find work in the big cities such as Fresno or Bakersfield, or further away to San Francisco or Los Angeles, places they had once shunned.

As a part of a more extensive body of work documenting rural life in California's "forgotten middle," Matt Black, who grew up in the Valley, has been photographing the lives of the Black Okies that stayed behind. We see their world cobbled together from minimal stuff and modest means. Under the great canopy of the Valley sky, men, women, and children dripping with sweat, bend and tug, or take cover under broad brimmed hats or the shade of a building or tree. We can still feel their quiet dignity, the goodness of the body in natural rhythm of farm work. Yet others seemed to have turned inward. Doubled over in destitution, men appear to be little more than a thing among things-a cardboard box, a cracked hose, a tumbleweed blown in from nowhere.

Dreams in the making, and dreams in the breaking. Matt Black captures it all-the dark and the light of it-and this gives his photographs their power and originality, their sadness and their beauty, and above all, their haunting presence.

Matt Black lives in Lemoncove, CA and participated in Light Work's Artist-in-Residence program in June 2003. Matt Black's work was supported by a grant from the Alexia Foundation for World Peace.

Aris Janigian is a professor of humanities at the Southern California Institute of Architecture, and has written on the philosophy of architecture and design. His book, Something or Nothing, a collaboration with graphic designer April Greiman, was published in 2002. His novel, Bloodvine, set in the Central Valley, was issued by Heyday Books in 2003.