Jonathan Moller
Three women, themselves survivors of the violence, watch as the remains of relatives and friends who were killed in the early 1980s are exhumed. Nebaj, Guatemala., 2000 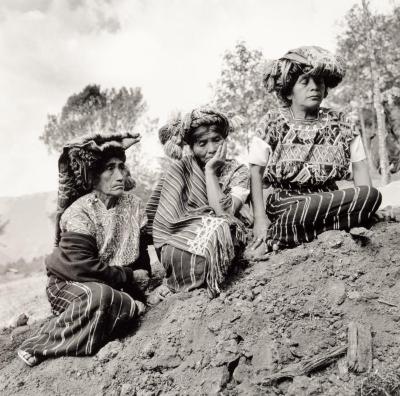 Jonathan Moller lives in Denver, Colorado. He participated in Light Work’s Artist-in-Residence program in May 2004.

It is said that the bones of the dead tell no lies.  In many cases, they speak on their own behalf, telling stories of pain, violence, and abuse.  In Guatemala, every clandestine cemetery that is found, every bone that is recovered from Mother Earth speaks of the people who were annihilated, of the homes burned, of the indiscriminate massacres.  In short, they speak of the crimes against humanity, of the genocide committed by the army against the indigenous population.

Jonathan Moller’s photographs speak of this.  But they also show another face, the face of life, hope, redemption, and demands for change.  The Communities of Population in Resistance (CPRs) offered a challenge to the established order, to de facto violence, and to state terrorism.  Not only were they survivors, they also organized to reject what the perpetrators represented—death, violence, humiliation, and inhumanity.  That’s why they were persecuted—for conquering death and for telling their story, a story that also belongs to the Guatemalan people, a story that speaks of the struggle for justice, peace, dignity, and better living conditions.

The CPRs are an example of a brave effort at community organization, of peaceful existence, and harmony with nature.  They were the conscience and witness of a people descended from one of the greatest and most spiritual human civilizations that has borne the marks of suffering and repression.

These images denounce the violence and give a message of life.  They inform while capturing the beauty of a passing moment that is fixed in memory.

Each moment recorded by Jonathan Moller’s camera passes into eternity, yet also gives encouragement for the future.  Each moment sets an example for future generations, so that they may know the past, which is filled with darkness but also contains hope, struggle, and optimism. Hope is seen in people’s labor, in children’s faces, and in the construction of a better life for all.

To ensure that the genocide will never be forgotten and that the perpetrators be brought to judgment and punished some day, this work becomes a chapter in the collective memory of a history that has been officially denied.  In the official chronicles, the events captured by Jonathan Moller’s camera never occurred.  There was no scorched earth, no massacres, no body dumps, and no genocide.

Guatemala’s civil war led to the death and disappearance of over two hundred thousand civilians and created hundreds of thousands of refugees and displaced people.  By the army’s own admission, over 450 villages were completely wiped off the map during its five-year scorched earth campaign (1979–1984).  Massacres of women, children, and the elderly occurred on a regular basis.  The UN-sponsored Truth Commission concluded that the United States trained, aided, and otherwise supported the Guatemalan military in its genocidal counterinsurgency campaigns against indigenous populations.  Now, more than eight years after the signing of the Peace Accords, the country continues to experience a culture of impunity, violence, poverty, and exclusion.

Within the context of a country on the path to peace, survivors of the war, including the CPRs, want to search for and reclaim the remains of their loved ones who were massacred or disappeared.  The exhumations allow the survivors to begin healing, giving them the opportunity to expose the truth of what happened, and in some cases to seek justice.  These images only begin to tell the story of the repression and unspeakable violence suffered by the majority of indigenous Guatemalans.

Over eleven years ago, in those profoundly beautiful mountains and jungles, I joined my passions for photography and social justice.  It is my hope that in some way this work speaks to my vision as an artist and an activist, and most especially to the lives of those in Guatemala that survived and resisted death and exploitation, and who continue to struggle for their land, their basic rights, and their culture.

Reprinted with permission of powerHouse Books, Rigoberta Menchú Tum, and Jonathan Moller from Our Culture Is Our Resistance: Repression, Refuge and Healing in Guatemala, by Jonathan Moller.

Jonathan Moller lives in Denver, Colorado. He participated in Light Work’s  Artist-in-Residence program in May 2004. His Web site can be found at www.jonathanmoller.org.

Rigoberta Menchú Tum is a renowned advocate of indigenous rights in her native Guatemala.  She was awarded the Noble Peace Prize in 1992.