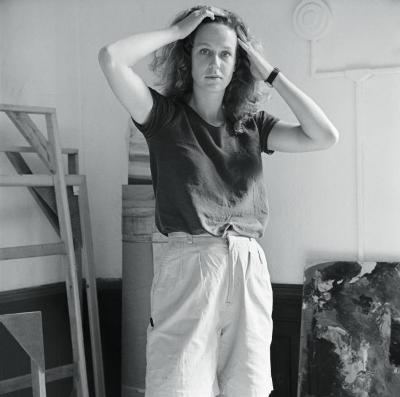 These posed environmental portraits, depicting fellow graduates within the arts community at Yale, were made between 1981 and 1983. At the time few specific indications of historic period were included in the series. Originally, as was the norm, the images were printed on silver gelatin paper. My aim in making digital renditions of these images at Light Work was mainly to encompass a larger size, but also to explore current viewers' perception of content versus technical process and presentation.

The image--silent and still, a token of a past only just gone and yet forever beyond reach--is spoken, read, and thus performed during mute recitations framed by margins of the here and now. Gray tones of the recently forgotten cycle through an admixture of memories with their Technicolor shades of familiarity, happiness and joy, fear, longing, even hatred. To this, one adds tinctures of an embryonic consciousness of who one is and where one comes from. Straining with the answers, one turns to that on which they look at a given moment of culture, war, and economy. An image, a picture, and a photograph are thus molded to the ever-changing contours of contemporary social reality.

As I write, I scroll through a PDF layout of SUnited Statesn Lipper's 'Not Yet Titled Series 1999-2004' on my laptop. On the desk, beside my keyboard, is the artist's statement for this project. Running no longer than a clipped though polite letter, Lipper's matter-of-fact words fill little more than half a side of a sheet of writing paper. I quote them at length:

Functioning as something of a time capsule of associations, this series is perhaps more defined by its dates than by words. The images began as a loose narrative in 1999. At the time, I found myself drawn to military and Cold War references. Equally I was seeking an unembodied vantage point, one not set in a specific geographic locale. The series was for the most part finished in August 2001.

In the period that followed, due to world events, I could not reconnect to the place I had been when the pictures were made. In 2002, an anonymous collaborator, also from New York, spontaneously paired some of the images acting both as an historic witness and also as an element of chance or synchronicity.

The pieces were printed large scale this year using traditional photographic materials and mounted on aluminum.


To be "not-yet-titled" is other than remaining "untitled." These paired images are named as concretely as the, at once, extended and concealed contours of our present moment and its specific social reality permits. As a series, these images acceded to a legibility and then lost that which they had gained in the crucible of their making at a particular rupture in the social, spatial, and temporal fabrics we wrap ourselves in both individually and collectively. The tear and break was imbricated by traumas made material and hauntingly visible and so too, one feels, are these images. In this, the traumatic dimensions of not only looking at and seeing images, but also the type of critical and analytical acts of looking required to "make-sense-of" and "to read," are palpably felt and raw.

Reconfigured and remolded like the Golem, these images are reborn as mute pairs in conversation with a past and a present, with representation and the real, each with its ends and returns, longings and traumas. Traditionally, reading from the left to right panel, the diptych is a format given to, in turns, resolving or compounding problems. Lipper's diptychs appear to reverse such logic and, at least to my eye and mode of understanding, insist on being read from right to left. If one follows and does so, one may find more than a theory of history with its sage directional wisdoms for life and how to live it. There is a politics and ethics of representation inscribed there too which one will not find today in the blog-blurred eye of America's mass media or the hollow and hateful speech of its ascendant political class.

History moves on and social reality changes, and so too must we adjust our strategies for both making meaning and shaping our world. The sheer contingency of Lipper's "time capsule of associations"--images that have found, lost, and created anew their legibility and potential meaning--is a mirror that bears potential witness to where we once were and where we may yet find ourselves. The testimony they give in all their mute eloquence is of time and chance, the turning of one page burdened with ink onto the terrible whiteness of another, and then the power of nightmares. We are the actors and agents here. As viewers before this series of diptychs, so too we are viewers of a world where war is redefined as not the exception but the rule, and politicians sell themselves as mere managers of our fears. In the past, SUnited Statesn Lipper's photographs--in 'Grapevine' and those of 'trip'--found a relationship and much of their meaning in and alongside words. The paired images of this new series take a viewer to a place where words end and actions begin in the conjuncture between what has passed and what will come that is our here and now.

Susan Lipper lives in New York City and participated in Light Work's Artist-in-Residence program in 2004. Her website can be found at http://www.sUnited Statesnlipper.com.

John Slyce is a writer and critic based in London, United Kingdom.