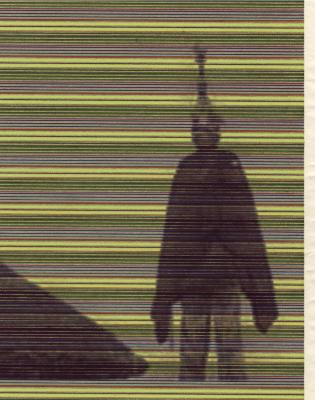 For a more recent CV or bio please visit the artist's website, http://matthewswarts.com/

Each image here began as a simple word input into an Internet search engine, a curiosity about what a random word “looked like” when input into one of the various search engines Swarts employs for finding new images. Once downloaded and manipulated, each tiny, low-resolution electronic image is made into an object and printed, in this case, by a twenty-nine dollar inkjet printer onto a variety of substrates ranging from paper towels to wrapping paper. This image is then scanned at maximum resolution and reproduced using the finest large-format printing options available. In final form what began as (in most cases) a 20K JPEG file has become a lush and seamless inkjet print measuring nearly four by six feet. One cannot help but ponder the playful exchanges of high and low resolution (virtual and life-sized) Swarts embeds into the making of an image, as if the physical crisscrossing of technology were meant to echo the psychological valence of meaning associated with his images.

Swarts holds a degree in philosophy from Princeton, so it is little wonder his images resonate with heady questions as much as they do with self-effacing humor. As the seemingly non-rational grids of images here demonstrate, he is interested in making visible how our commonly held associations for images (and, by extension, the words and other images that they signify) may be suspended by certain juxtapositions, certain obfuscations. How, more simply, does the viewer's need to find a narrative change across fresh, more elliptical, shifts in context? Can narration be suspended altogether? By taking such highly trafficked, highly commercialized images out of context, away from their intended use to explain or sell us something, Swarts’s work also reiterates that understanding visual language is about understanding appropriation because (in what could be the work’s most important announcement) images don’t belong to anyone.

Yet with this collection of quotidian images, as is the case with his earlier photographic environmental portraiture, Swarts succeeds in mapping a complex and haunting interior landscape. Technological and philosophical questions aside, it is in their psychological trajectory that Swarts’s images vibrate strongest. Instead of a Freudian tale, Swarts diagrams the clumsiness of the human condition by transferring to the viewer a frustrated obsessiveness about trying to make rational connections—connections in this case burdened by consciousness, by history, and, overall, by memory. Through images alluding to sexuality and aggression, the body becomes a transport vehicle to the metaphysical, as Swarts implicitly questions if they signify disrespect for the body or, rather (as in the image of what appears to be two hanging corpses) are a release from it through the experience of its most extreme possibilities.

Many of the images depict the self amidst external visible “static”—a man, for example, with a rubber face pulled up over his head, trapped inside himself and a haze of drawn connecting lines, a total physical and psychic stasis so potent that one feels the claustrophobia. Or a drill sergeant barking a jump order to a parachute trainee hung precariously over a cliff on a steel support beam behind a screen of floating silver orbs, frozen in a moment so uncertain it is unclear whether the man is indeed being trained or is jumping to his death, or both. Or a wrestling hold between two men, seen as an act of ambiguous intimacy behind a veil of infinitely repeating waves and crudely-made folds, equal parts physically and psychologically abrasive. Finally, a man tied down and edging toward an abyss in the midst of visible noise created by the lines of grammar school notepaper (how strange), his helpless and inevitable demise charted across the picture plane. The images here are those of experiences that push the realm of the known. Groomed and highly designed yet poetic and elliptical, they upend the syntax of visual experience with refreshing power.

Matthew Swarts lives in Somerville, Massachusetts. He participated in Light Work’s Artist-in-Residence program in 2004. His Web site can be found at www.matthewswarts.com.

Alexis Salas is an independent curator living and working in Mexico City.