John Gossage
Monumentenbrücke, from the series 'Berlin in the Time of the Wall', 1982 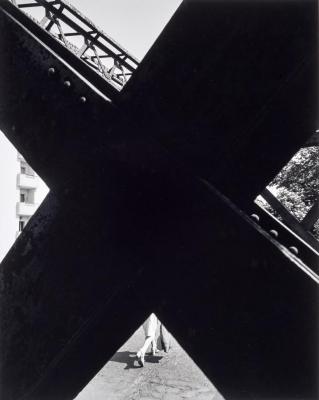 In separate articles about his work, different critics have described John Gossage's photographs as, 'a truly original attitude towards flowers and gardening' and 'drab pictures of suburban yards and gardens that appear at first to be deceptively ordinary, and turn out on closer inspection to be deeply ordinary.'

It would appear that people's reaction to Gossage's work are similar to people's reactions to Slim Jims, you either love 'em or you hate 'em. Perhaps the reason for this disparity of thinking is that he makes the viewer work harder to unravel his very introspective and contemplative pictures.

In his most recent series, 'Gardens' and 'Ponds', he refrains from teaching us lessons while offering us eloquent photographs about nature and man's attempt to understand and harness it.

Since 1964, Gossage has exhibited and published his work internationally. In 1974 and 1978, he received photographer's fellowships from the National Endowment for the Arts. Gossage is an instructor of photography in the Graduate School, Art Department at the University of Maryland at College Park.

Jeffrey Hoone (c) 1985
By any measure John Gossage is a non-conformist. He was thrown out of high school at sixteen yet taught college at the graduate school level for close to fifteen years. He was never formally trained as a graphic designer yet has designed twelve of his own photography books as well as numerous books by other artists. He grew up in a household where there was no art, no music and no books yet has amassed a personal library of thoUnited Statesnds of photography books, curated dozens of photography exhibitions, and served as a consultant to art collectors and foundations around the world.

Gossage was invited to participate in Light Work's Artist-in-Residence program in 1984, and we mounted a solo exhibition of his work in 1985. We managed to stay in touch on and off over the years, and in the fall of 2003 he returned to Syracuse to lecture in the Art Media Studies Department at Syracuse University. During that visit we had a conversation about his current book project titled, Berlin, in the Time of the Wall, and began to discuss how Light Work might be able to turn the book, which was to be over four-hundred pages and weigh close to nine pounds, into a special issue of Contact Sheet.

The idea wasn't so off-the-wall as it seems in retrospect because a few years earlier he had helped us produce a one-hundred-twenty-eight page issue of Contact Sheet that he designed featuring the work of photographer Chan Chao. That project was made possible because Nazraeli Press was publishing a hard bound edition of the publication and we were able to issue Nazraeli's book as a soft bound edition for the same cost as a regular forty-eight page version of Contact Sheet. At the time of our initial discussions about the Berlin book project Gossage had the funding and publisher in place to produce an elegant hard bound edition of the book that would be slip-cased and sell for $125. As with the Chan Chao project our thinking was that we could produce a version of the book by extending the print run of the original and by making a few minor changes to the cover and a few inside pages so that it could function as a special issue of Contact Sheet.

After checking with the printer we realized that even with the economy of printing both versions at the same time, the cost was still far outside of what we could afford. In addition, our mailing house informed us that the postage for sending 4,000 copies of a nine pound book to our subscribers in all fifty states and thirty countries was not only prohibitive but a dicey proposition to unload on stressed out mail carriers at the beginning of the holiday season. With this reality staring them in the face most other artists probably would have dropped the project as an interesting but unworkable fantasy. Gossage has skirted convention most of his life and he took this as another opportunity to accomplish what everyone was telling him was not possible, practical, or even conceivable. This spirit coupled with his intimate knowledge of the art and mechanics of the printing process led to the solution that is in your hands.

Most books are printed several pages at a time on large sheets of paper called signatures. Typically one signature will contain eight, twelve or sixteen pages which then gets folded and trimmed to the final size of the book. Each signature is then gathered together and bound either to cloth covered boards (hard bound) or to a stiff paper backing (soft bound) to produce the final shape and size of the book. The original version of the book contains thirty-five signatures and this issue contains six signatures. In order to get this version to work Gossage could only change the first signature which contains the title information, introduction, and essay by Gerry Badger. The remaining signatures could only be reordered to create a coherent cadence and sequence out of what had become almost a random selection of images. Gossage gracefully accomplished this nimble feat of choreography and added another layer of conceptual complexity to the project by extending what Gerry Badger describes as "trying to make visible the psychological effects of history."

This issue of Contact Sheet accompanies an exhibition at Light Work that includes yet another selection and sequencing of the project. To create so many different presentations of one body of work would be a challenge to most artists. But at the core of what Gossage has produced over the past twenty years is the desire to order and reorder what on the surface appears to be images of ordinary places where something is or has been profoundly wrong, dangerous or deadly. By allowing himself the freedom to fashion the images that compose Berlin, in the Time of the Wall into so many different but related forms, Gossage pushes aside convention in order to reinvent how to look at the remains of history as if it were a living thing instead of a finite story.