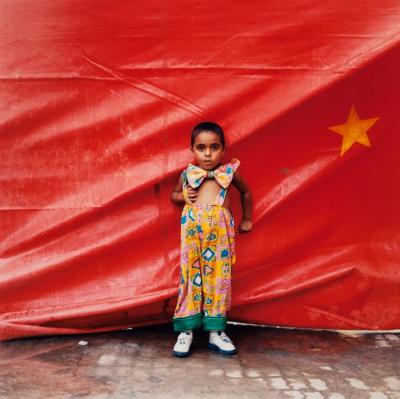 “A place can be peopled by ghosts more real than living inhabitants. The lure of the local is not always about home as an expressive place, a place of origin and return. Sometimes it is about the illusion of home, as a memory. If place is defined by memory, but no one who remembers is left to bring these memories to the surface, does a place become no place...?”

--Lucy R. Lippard, Lure of the Local: Senses of Place in a Multicentered Society (New York: The New Press, 1998).

Her calling card is red and spells Tone with the “O” in the shape of a suitcase. The photo reproduced on the back is one of a large suitcase placed in front of a pair of feet, with tips of blue-jeaned legs peeking over the frame. One presumes this to be Tone. The message invoked by Tone’s business card is the same one at the heart of her work; it reads I’m packed, I’m ready, Where am I going? In Tone Stockenström’s most recent work, she goes home. “Where is Home?” is a visual exploration of exactly where that is and precisely what it means. As a Swedish immigrant to the United States at the age of six, Tone has been moving fluidly between and through cultures ever since.

Stockenström starts her journey with the notion of home as a place of origin that she can return to. But Home is a trickster that morphs and transforms into many personalities with many disguises. The photographs become visual labyrinths that map her attempt to find her way to the mythical center of home, the place of her creation. Inside and outside, belonging and stranger, out there and in here, center and margin, knowing and not knowing. Her photographs invite us to walk beside her, to become both travel companion and collaborator, as she encounters distant relatives, her mother as a young newlywed, and family skeletons long hidden, now uncovered. Stockenström avoids the cool distance that typically defines the photographer-as-observer documentary stance. Through her photographs, the past and present are interchangeable. Like a loving, determined archaeologist, sifting through hundreds of photographs, both historic and of her own making, she excavates truth. But then she has a lot at stake—her own identity.

The suitcase as metaphor weaves its way through Stockenström’s life and story. In one historic photograph, a young woman in a white coat and matching pillbox hat stands in front of a high-rise apartment building, on the edge of a parking lot full of cars. With one foot ever so slightly raised, about to take a step, she holds a striped bag, coat unbuttoned and open, smiling gently at the photographer. A small distance from her, resting on the ground, is a white suitcase, and equal distant from that is a dark suitcase. It is the unusual individuality, the presence, afforded the suitcases, that lends this photograph—Tone’s mother on her wedding day—its particular poignancy, a crystal ball image of her life to come. In another photograph, recently made, we are sharing a meal with Stockenström and her Aunt Monika. Monika looks at us with startled dismay as she brings a long white napkin to her mouth, her cheek covered by a large square flesh-colored bandage. Gold rimmed cups, saucers, and plates litter the foreground of the frame, and behind her on the wall hangs a ceramic plate of Jesus and a framed photo of white flowers. She looks at us as if, at the very moment the photograph was made, there is a flash of recognition, her face registering her surprise, perplexed by our presence.

Stockenström understands that photographs are fragments of experience that easily lose their identity. Photographs, like people, when removed from their context, blur the lines that define who they are. The who, what, where, when, why gets distorted, like memory, through time, lost histories, neglect, and reconstruction. They are like pottery shards that must be meticulously pieced back together to reveal their story, despite gaping holes, hairline cracks, or blatant reconstructions that, unknowingly or unwittingly, alter original histories. In her ongoing extended series “Where is Home?,” Tone Stockenström pieces together her family history and, in the process, herself.

Tone Stockenström lives in Chicago, Illinois, and participated in Light Work's Artist-in-Residence program in 2004. Her Web site can be found at http://www.tonephoto.com/.