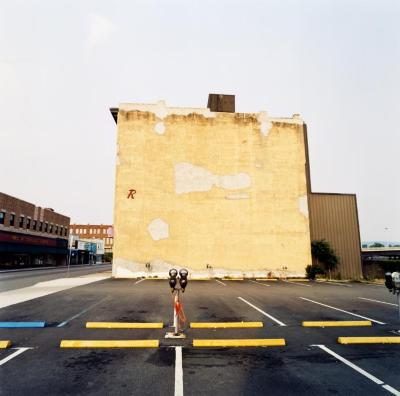 For a more recent CV or bio please visit the artist's website, /www.kjohnsonphotographs.com/

Keith Johnson has been involved in photography since the early seventies. He graduated in 1975 from Rhode Island School of Design with an MFA and studied with Harry Callahan and Aaron Siskind after spending a year at Visual Studies Workshop with Nathan Lyons. He has exhibited throughout the United States, most recently in solo shows at George Eastman House in Rochester, NY; College for Creative Studies in Detroit, MI; the Art Institute of Boston; The University of the Arts, Philadelphia, PA; and CEPA Gallery in Buffalo, NY. Johnson lives in Hamden, CT. He participated in Light Work's Artist-in-Residence program in January 2005. His website can be found at http://www.kjohnsonphotographs.com/.

Keith Johnson likes to roam in those manufactured spaces often found at the edge of urban areas where things are in flux and the space is not clogged up. Alert, anticipating, and prepared, Johnson scans the landscape for visual clues; sometimes a subject is so compelling he immediately applies the brakes. More often though, there is a U-turn brought about by a distinct sensation that pictures are "hovering" nearby.

Hovering is the intuitive knowledge, grounded in years of experience, that pictures are "over there" and your job is to "go get them." It's an active form of visual deliberation where a cultivated inner awareness is combined with the gifts of St. Lucy of Syracuse [Sicily] (patron saint of the eyes and traveling salesmen). St. Lucy is Johnson's and photography's muse and represents a Johnson truism that it is vital to have a good time while making photographs.

Johnson interlaces the empirical, the instinctive, and the curious to discover just the right spot to place his feet. For thirty years he has used the square format of a Hasselblad Super Wide camera to define his relationship to the landscape. The square is a static shape that requires a photographer to create a directorial viewing path. Johnson does this by physically moving into the scene, as illustrated in 'Bermuda Square.' Here he takes pleasure in the overlapping lines and colors that simultaneously optically advance and recede. This creates a floating abstract meditation that is anchored by the square within a square.

His hand-held images have a formal immediacy that relies on lush detail to create nonfigurative and compelling compositions, such as in 'Do Not Open.' This image pulls the eye into the frame, gently guiding viewers through deep-space perspective and an intruding foreground object. The resulting juxtaposition turns the sublime into the absurd. This represents the interaction of two energies, yin and yang, which cause everything to happen and cannot exist without each other.

The freestanding powder-blue staircase to either heaven or nowhere of 'Highland Park' is indicative of Johnson's openness to contemplate inexplicable intersections and their possible connections. One senses the wonder and joy from seeing a confluence of challenging and diverse subjects while simultaneously revealing the uncertainty of meaning.

Johnson's effortless simplicity can be seen in his use of color, which is dominant in his images but not the main theme. This can be seen in 'I-95 Branford,' where color is seamlessly integrated into the view--we are aware of it but it isn't what drives the scene. What comes through to link all of his images together is the imprint of humans upon the world. What we see is the blending of formal pictorial elements in abstract terms. Johnson's photographs at once record something tangible and evoke something elusive and unsettled. Although his work is built on the human interaction with the landscape, Johnson uses the inclusive nature of the camera to show us a new context and to open a portal for us to draw our own conclusions.

As an observer, Johnson relishes situations where something can be understood in numerous ways. In 'Seneca Point,' the ambiguity of the car headlights illuminating a black zigzag shape in the road is at once scary and funny. Is it a blood trail of road kill, the oil stain from a blown engine, or markings of teenage mischief?

Johnson accepts and appreciates what is, and is optimistic that the process of making pictures will lead him to discover meaning, not a harsh or cynical assessment. This experience is an attraction of being a solitary photographer who controls an image from start to finish, making the act of creation a methodology for self-evaluation.

A quote attributed to Albert Camus summed it up, "If we understood the enigmas of life, there would be no need for art."