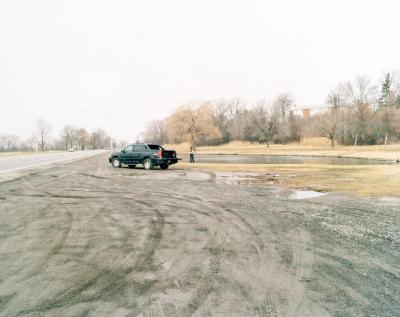 For those unfamiliar with the work of British photographer Stephen Hughes, these wintery, downbeat landscapes—almost featureless apart from a characteristic sense of residual narrative—provide a succinct introduction to his overall style and preoccupations. Made last year in and around Syracuse during his residency at Light Work, they are Hughes’s first photographs from the U.S. after nearly a decade of working in Europe.

The paradox of the North American landscape for generations of British photographers is that while American imagery has had a profound effect on shaping the British post-war imagination through films, TV, music, literature, and photography, that very process has also rendered the American scene something of a creative dead end in Britain. Its landscape, so familiar for us in all its forms, has become a mythic terrain. To some extent, every attempt by British photographers to photograph the U.S. is to confront this mythic status, one that mixes fact with a rich and complex pattern of fictions.

Stephen Hughes is no exception to this. His photographic sensibilities have been refined by an American realist tradition in photography and its particular poetry of space, light, and vernacular form. But the dismantling of the grand American narratives of “The West” and “The Modern City” for newer topographies—or for what Robert Smithson once called “low-profile landscapes”—has added a more quizzical perspective to this tradition; for example in the work of Stephen Shore, Lewis Baltz, and Robert Adams detachment and careful, even systematic modes of description became important.

For Stephen Hughes and other young photographers in Britain, this notion of the quizzical view is fundamental, but it is also true that, for them, the new topographers and their followers have long since become another part of the American mythology. And to an extent they have served only to visualize ground already staked out by American post-war writers. As John Updike commented recently on his reasons for leaving New York in 1957, “The real America seemed to me ‘out there,’ too homogenous and electrified now to pose much threat of the provinciality that people used to come to New York to escape. Out there was where I belonged, immersed in the ordinary, which careful explication would reveal to be extraordinary.”1

Although the “out there,” the ordinary, and the everyday have become a more commonplace setting for art than in 1957 when Updike, working from Ipswich to the north of Boston, felt he was “mailing dispatches from a territory that would be “terra incognita” without me,” Hughes has become acutely tuned to the atmospheres of peripheral, off-center places. He prefers locations marginal to the major flows of human existence but where certain energies, perhaps from the city, perhaps escaping from the domestic rigors of suburbia, come to simmer and finally disperse. Hence the idea of residual narrative, of something hanging in the air that makes Hughes’s photographs so compelling. There are clues if we want to look, but Hughes is no detective, neither does he have a particularly forensic eye. Rather, in line with his celebrated photographic antecedents, he prefers to stand his distance in order to better absorb what might be called the psychology of places.

An interesting point of connection for Hughes’s work from Syracuse, to bring the discussion back to the imposing flow of American fictions crossing the Atlantic, would be the new American cinema. Given the seasonally specific nature of his images, the examples that come to mind are the washed-out naturalism of Vincent Gallo’s Buffalo in “Buffalo ’66,” the snowbound Minnesota of the Coen brothers’ Fargo, and the brittle Connecticut winter of Ang Lee’s “The Ice Storm.” In each of these films the spareness and increasingly constricting nature of the landscape and the weather becomes a fitting context for the anxieties and uncertainties building around the characters and their lives. In Hughes’s photographs, too, there is this feeling of a nagging anxiety, perhaps nothing more than the anxiety of stasis or boredom, but it is something that, in the still image, remains unresolved and that manages to reignite our imaginations with that small spark of conflict each time we return to the pictures.

Stephen Hughes lives in Brighton, United Kingdom, and is represented by Robert Mann Gallery. Hughes participated in Light Work’s Artist-in-Residence program in 2004. His photographs can be found on the Robert Mann Gallery Web site at www.robertmann.com.

David Chandler is the director of Photoworks in Brighton, United Kingdom.