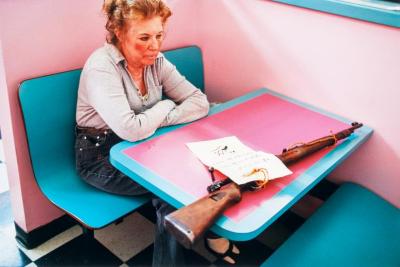 For a more recent CV or bio please visit the artist's website, http://www.martinkollar.com

Slovakian photographer Martin Kollár is no stranger to traveling. His photography regularly takes him all across Europe. So it is a little surprising that the venues he seeks out are frequently small, neighborly events of normal people going about mostly ordinary tasks. Within this framework however, Martin succeeds at capturing extraordinary moments. They are the kind of snippets of life we would love to tell others about, if we ever bothered to notice them. His images hone in on moments that are ever so easily missed. However, once captured on film they stand out with a profound level of humanity. Martin has exhibited his work internationally and is currently working on a book project to be published in Paris. Among other photographic awards, he recently received a Leica Oskar Barnack Award Honorable Mention. When not traveling, Martin lives in Bratislava, Slovakia.

Jonathan Swift’s concept that “vision is the art of seeing things invisible,”1 seems an appropriate starting point to discuss Martin Kollár’s photography. He is an avid traveler, and gathers surprising views of everyday people and events along his path. With an instinct for capturing profound moments where seemingly little is happening, Kollár’s images act as a powerful conduit, channeling the viewer toward the great unknown in their own backyard. In his recent USA series, he connects the viewer with an identity of people and places apart from what they may have imagined. Americans may be seen as transparently living out prized individualistic ideals, but Kollár holds a more complex mirror before us all, much as Swiss photographer Robert Frank did half a century ago with The Americans.

A native of Slovakia, his method of seeing the extraordinary in the everyday also inspires his photographs of Eastern Europe, where a book was published from his Nothing Special series.2  Interestingly, when comparing images made in his native area to those made in the US, neither insider nor outsider perceptions differentiate the two series. Perhaps Kollár achieves both, and on a global scale. Although he tends to make his subjects seem exotic while generating humorous qualities, exploitative content is curiously absent.  To avoid placing judgment in his photographs, Kollár purposefully seeks a thoughtful balance between amusing and bizarre, and the results offer a distinct imprint of humanity.

Through Kollár’s lens, we are able to witness epic moments with the realization that we could have seen the same scene, if we had only looked. In Syracuse, USA, 2005 (woman with gun) we are caught by the reality that such diner decor schemes exist, elevating a banal backdrop to extreme. But more to the point, we are held by the enigmatic portrait of a woman sitting across a table from a tagged rifle under her contemplative gaze. Perhaps she is simply staring into space, as we all do from time to time, but the presence of the gun offers powerfully mysterious possibilities.  We are led to imagine any number of exciting scenarios, even as we might also know that gun trade shows are common events in many places.  The image triumphs by allowing us to bypass the probable in favor of the dramatic.

Working in a documentary style, Kollár doesn’t direct his subjects. He simply notices them.  This is not to imply his process is effortless. On the contrary, it involves split-second choices, many shots of one subject, and careful editing.  This creative course is guided by Kollár’s unique foresight and often results in complex subject matter.

Kollár’s use of color and repetition are elements that affect his compelling photographs. In the above mentioned image, a strong relationship exists between the pinks in the table, wall, and rouge on the woman’s cheeks.  While these comparisons are absolutely obvious, they also scream conflict on numerous levels. Connotations of pink abound but do not fit with the woman or the gun.

In Bowling Green, USA, 2005, it is vast repetition that demands our attention. A cinematic air taps our collective memories as we witness this Southern landscape holding an endless sea of Boy Scouts, in simultaneous salute. Kollár’s mass gathering of boys shows conformity at an overwhelming level. A response to such uniformity can be both stirring and frightening at the same time. One cannot help but associate images of the German Youth under Hitler.  The present-day scouts embody pride and promise, but they too look as if indoctrinated to someday carry a cause that may not necessarily be their own.

The journey Kollár’s images take us on is ultimately one of visual pleasure. His photographs have the ability to grab our media-saturated attention, and then, more subtly, introduce innumerable layers. For the American audience, this is where the unique irony inherent in Kollár’s USA portraits lies: while they question our individualist ideologies with a direct focus on homogeny, they also present a multiplicity that requires us to use acutely individual experiences in search of their meaning.

2. Martin Kollár, Slovakia 001, a Pictorial Report on the State of the Country, (Bratislava, Slovakia:  Institute for Public Affairs, 2001).

Martin Kollár lives in Slovakia. He participated in Light Work’s Artist-in-Residence program in April 2005. His Web site can be found at www.martinkollar.com