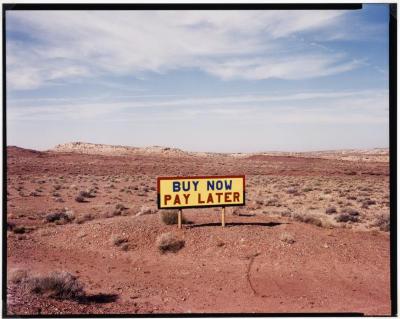 Tirelessly traveling the United States, David Graham captures the colorful, sometimes surreal, and often bizarre, in the thoroughly American landscape. Graham seeks out subjects which celebrate our singular freedom of expression in colorful roadside attractions and general oddities: toys and trompe l’oeil signs found in suburban settings, idiosyncratic sculptures like the California dentist and his mammoth Amazon warriors, and eccentric scenes such as the Dallas hamburger stand that features a life size statue of Lenin. Chronicling the American scene with his unique sensibility and acknowledging popular forms of American photography: the snapshot, the family portrait and vacation pictures, Graham brings relevance to the creativity and dreams of the common man.

David Graham considers his photographs 'environmental portraits'- people in their homes, on the job, celebrating, playing. These photographs explore cliches, contradictions, myriad nuances of form and meaning, and innumerable personal histories, all within the context of life in North America. Graham does not attempt to simplify or to generalize about the quality of this life, but to illuminate the diversity underlying the modern trends toward a homogeneous culture. He suggests, 'They are portraits in the largest sense because, the individual, whether visible in the picture or not, permeates the space. The photographs provide visual testimony about the relationships of people to their environments and to one another.'

Graham lives in Newton, PA, and teaches photography at Moore College of Art in Philadelphia. He recently received a photographers fellowship from the National Endowment for the Arts and has exhibited his work at the Jeffrey Fuller Fine Art, Philadelphia, PA, and Armstrong Gallery, NY, among others.

1985
There is a tendency to label the work of an artist within specific genres or styles in order to understand their efforts in relation to other artists who work along similar lines. This process allows us to make comparisons and draw conclusions based on what is already known and accepted. This method of evaluation by comparison was comically characterized in Robert Altman's film, The Player where writers and agents continually pitched new movie ideas to a studio executive with come-ons like, 'it's kind of like Out of Africa meets Pretty Woman' or 'it's kind of like Ghost meets The Manchurian Candidate.' While these types of comparisons might be an expedient introduction to a film or the work of an artist, when left unexplored, it is like settling for the Cliff Notes and missing the experience of reading the book.

I have known David Graham and his work for quite some time. He participated in Light Work's Artist-in-Residence program in 1985 and his work has been well chronicled in two books, American Beauty, published by Aperture in 1987, and Only in America published by Alfred A. Knopf in 1991. Thinking that I was familiar with his work and considering him a gifted and dedicated practitioner of the Diesels and Dinosaurs school of American roadside architecture, extravaganza , and excess I decided that an exhibition looking over the past twenty years of his work would be an important and exciting project.

I went into the project thinking that I knew what Graham's work was about, but I have come to this point understanding that his contributions carry a deeper level of complexity and range than I had first assumed. Without question many of Graham's photographs fall firmly within the Diesels and Dinosaurs genre mapped out by Stephen Fitch and others. Graham's contribution to this genre is immense and the clarity of his well seen and sighted photographs deserve the praise of Jane and Michael Stern who wrote in their introduction to the book Only in America that Graham, '…has created a national photo album that render a brave and preposterous side of a country that never fears to be ridiculous in its quest for the sublime.' But among the monster fish, donut shaped restaurants, cowboy boot restrooms, Teepee motels, and airplane-topped gas stations, David Graham has mined the oddity of roadside attractions, the spectacle of parades and celebrations, and the character of Americans at home and at play-- and in doing so discovered tension and uncertainty where others have only found excess and drama.

The inferno at the Branch Dividian site in Waco, Texas and the devastation of floods and tornadoes seem like serious subjects for a photographer who stops the car for almost every trailer park, tourist trap, and holiday parade along the highway. Until I had begun to seriously work on this exhibition and catalogue my tendency was to pigeonhole David Graham as just an accomplished chronicler of roadside America. But what I have come to realize is that for more than twenty years he has been recording the scenes of a mobile America looking for meaning at the crossroads of kitsch and culture, past and present, and fantasy and reality -- and has indeed given us a portrait of a country that refuses to fit, like himself, into neat categories.

The opening pair of portraits in this catalogue of Matthew Stockton made eight years apart point out the uncertainty and tension that Graham so subtly but plainly records. The passage of time has not altered young Matthew's stiff and stoic stance, as if it were pre-destined that eight years later he would fit so comfortably into the uniform and regimentation of the Armed Forces. Meanwhile a statue of Jesus beckons to Matthew from beside the front porch of what we assume is Matthew's house. The ensuing eight years have badly weathered the statue but a new picture window in the house looks directly over the statue's decline. There is much to contemplate in this seemingly simple pair of portraits, and the invitation to explore is a key element in the work of David Graham.

Many of the photographs in this exhibition and catalogue were made with an 8 x 10' view camera, an extremely rigid and cumbersome devise that requires the use of a sturdy tripod and sometimes an exposure of several seconds. Perhaps this is the reason that Matthew Stockton appears so rigid -- asked to stand still in the fading autumn light. But as clear and precise as Graham's photographs appear, they also contain a great deal of motion. Not motion that betrays a shaky hand or a slip of focus, but a movement through time, the physical movement of the photographer from place to place, and as a witness to the events and attitudes that shift and shake our values and beliefs.