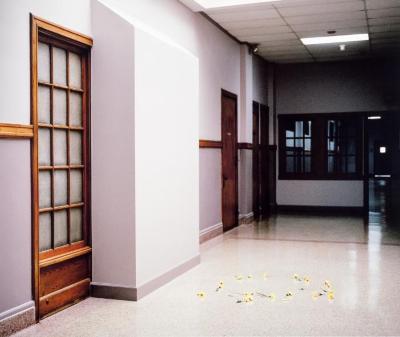 Japanese photographer Kanako Sasaki mixes a sense of girlhood with a hefty dose of spunk. Her playful series “Wanderlust” is rich in humor and vivacity. While at Light Work, Kanako plans to expand the series. First color prints have already rolled off our processor. She is currently scouting for locations around the Syracuse area to stage her imaginative photographs, which are inspired by childhood memories as well as Japanese traditional paintings and novels. She attended Ithaca College and the School of Visual Arts. Her work could recently be seen at Hitotsubo-ten Gallery and Morta Politica Gallery in Tokyo, Japan, and at the Visual Arts Gallery and the Local Project Gallery in New York. New work will be on exhibition at Art Cocoon Gallery in Tokyo, Japan in April. In addition to being a photographer, Kanako recently launched her own clothing line. Kanako lives and works in New York City.

Lush landscapes sparsely peopled. Young women precariously perched. Kanako Sasaki's photographs are compositionally minimal but beautiful, rich in color, imagery, and meaning. A resemblance to the brevity and depth of haiku is not coincidental.

Sasaki, who was born and raised in Japan, has turned for inspiration to traditional and contemporary Japanese art forms both "high" and "low," literary and visual. Western culture and the American environment, as well as her own childhood memories, have also been strong influences. As a girl, Sasaki spent a year in New Orleans. She returned to the United States for college and graduate school and now commutes between Tokyo and New York City. She is a photographer and recently started her own fashion line. Her art reflects the many dualities of her life.

Sasaki's images sometimes refer to the form and content of ukiyo-e, the lavishly hued woodblock prints from the seventeenth through nineteenth centuries. One ukiyo-e subject is the individual's relationship to, and enjoyment of, the landscape. Like Hiroshige's '36 Views of Fuji', Sasaki's series 'View from Here' emphasizes the subjectivity of the artist's eye and an awareness of her place in the world. And like Hiroshige's compositions, Sasaki's photographs often show unusual viewpoints - low, high, angled, or oddly cropped. Hers are personal images; she serves as her own model in some of the photos. It is difficult to discern which ones because individuals' features are obscured and figures are seen from a distance. Her models, almost always Asian, find themselves in a manicured, manufactured nature that is clearly American, or at least Western, rather than Japanese.

This communing with nature rarely results in harmony, salvation, or epiphany. Instead of the sinuous grace of an Utamaro beauty with her paper parasol, Sasaki's model rigidly holds up her umbrella in front of azalea bushes. In one image, Sasaki herself lies face down on the grass, straining awkwardly until her arm just barely dips beneath the surface of a lily pond. In other photographs schoolgirls, who could be characters straight out of the contemporary "low" art forms of manga and anime, jump up to see over the grassy horizon, or peer through holes in walls. They want to learn what is on the other side, what the future holds, but their glimpse is too brief to provide answers. Most of the figures in Sasaki's images are poised uncomfortably on the cusp between girlhood and womanhood. They seem ensnared in the complexity and uncertainty of adolescence, and also that of the post-modern world that they - and we - inhabit.

One remedy for that uncertainty is "living only for the moment, turning our full attention to the pleasures of the moon, the snow, the cherry blossoms, and the maple leaves; singing songs, drinking wine, refusing to be disheartened, like a gourd floating along with the river current ." (1) Sasaki quotes these words, written by Asai Ryoi in 1661, in her artist statement. They reflect the philosophy of the red light and theatrical districts of ancient Tokyo and Kyoto that gave birth to ukiyo. In that "Floating World," visitors sought escape through pleasure that fed all of the senses. Sasaki evokes a similar aesthetic release in her photographs. Focusing on the ordinary, regarding it from a different point of view, can make it seem extraordinary. "The effect," Sasaki writes, "is mesmerizing and makes being insignificant and human feel absolutely wonderful."

Sasaki's images capture the delights, dilemmas, questions, fears, and doubts facing a female artist coming of age. She gives us just a few figures, a few clues, leaving room for our imagination to complete her poetic tales of pleasure and loss, innocence and aggression, loneliness and playfulness.

Kanako Sasaki divides her time between New York City and Tokyo, Japan, and participated in Light Work's Artist-in-Residence program in March 2005. Her Web site can be found at http://www.kanakosasaki.com/.

Barbara Tannenbaum is chief curator and head of public programs at the Akron Art Museum in Ohio.