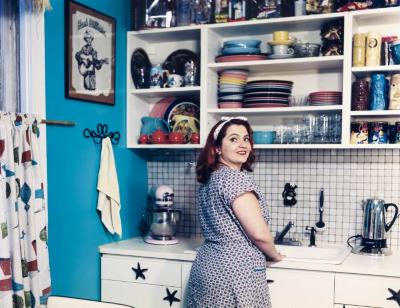 Chicago artist Jennifer Greenburg recently arrived in Syracuse ready to jump into her residency at Light Work. Her primary project will be editing and printing her series The Rockabillies, which examines a subculture of people who have adopted a lifestyle and values common to the middle class in the late 1940s and 1950s. Communities of Rockabillies exist in small pockets all over the country. During the past five years, Jennifer’s work has taken her from Chicago to Los Angeles, Nashville, Las Vegas, Minneapolis, Miami, Austin, Carbondale, and Orange County, CA. Jennifer Greenburg lives in Chicago, IL, and is an Associate Professor of Fine Art at Indiana University Northwest. Jennifer Greenburg’s work is part of the permanent collection of The Museum of Contemporary Art Tucson, The Museum of Contemporary Photography, The Museum of Photographic Arts, Light Work, The Santa Barbara Museum of Art and the National Gallery of Ontario. A full-length monograph, The Rockabillies, 2009, by Jennifer Greenburg was published by the Center for American Places.

There's a look to pictures from the 1950s. They feature the blissful consumerism of the era's advertisements, the big smiles of suburbanites in domestic settings that are part of so many family snapshots, the frank social revelation championed by the decade's documentarians. Jennifer Greenburg plays off this visual vocabulary so successfully that, at first glance, one could be forgiven for thinking The Rockabillies series was contemporary with hot rods and Howdy Doody, rather than photographed over the last few years.

They'd like that, the Rockabillies. Indeed, they've gone to a lot of trouble to make just that impression. Yet as you look at Greenburg's pictures you realize these aren't vintage prints, they can't be. Maybe you see the extension cord snaking through the living room. Perhaps you notice it's a modern television enshrined in that carefully restored case. It may simply be the print's color palette that tips you off, but there's always a clue that these photographs are really quite recent.

In a way these little incongruities testify to the extensive insulation of Rockabilly culture, but such intrusions of the present day serve more importantly to remind one that all this is real life. What's remarkable is not that the Rockabillies have constructed a reality so completely, it's that this is their reality. A real child lives in that meticulously - designed period cowboy room. Meals will be cooked in that picture - perfect kitchen, no doubt served on the sought - after Fiestaware displayed on its well - ordered shelves. It's not a theatrical set you're looking at - it's a home.

Rockabilly grooming and decorating are unmistakably conscientious, but to characterize Rockabillies as reenactors misses the point. A true 1950s house, if you think about it, would probably have contents from a previous decade - a hand - me - down sofa, a family heirloom of some sort, an antique or two. In contrast, a Rockabilly house and its contents will reflect only a strict span of mid - century America, perhaps a specific window of only two or three years. And while their courting and patterns of family life seek to replicate values popularly espoused in the fifties, the Rockabillies have proved less eager to adopt the racist, anti - Semitic, and red scare mentalities that were also notable features of that time. If the Rockabillies have succeeded in recreating anything, really, it's a particular brand of idealism.

The tangibles of Rockabilly life, exactingly restored and reproduced, make up the symbols and props of an ideology heavy on post - war optimism and small town glamour. Voodoo Larry and his family cluster proudly against a polished station wagon flanked by lawn flamingos, defiantly surrounded by the trappings of middle class success. Mrs. Hughes projects a domestic satisfaction Life magazine would envy. The selectivity with which Rockabillies choose to recall the past leads to a kind of hyper - realism as they inflate a few fractured elements to constitute a whole lifestyle. In doing so they conform to a set of roles and types with a zealous commitment not even demonstrated by the original models they appear to emulate. Though Rockabillies spend their time in vintage homes wearing vintage clothes listening to vintage music, the fact remains: what they have now, properly speaking, has never existed before.

These are people who have figured out how to guard their own innocence, and Greenburg respects that and has a critical admiration for it. She initiates a photo shoot knowing the home reflects its owner, and she trusts her subjects to select their own poses and the place in which to make these portrait tableaux. Perhaps it's not surprising that the members of an insular community choose to be photographed in interiors, and tend to face away from the outside world. This is illustrated in the way Tom Colbertson seems contained in the expansive turquoise shadow of his thoroughly replicated living room, keeping no more than a toe in the patch of streaming sunlight that interrupts an environment otherwise expertly controlled.

Greenburg's 1955 view camera is a credential in itself, but its great advantage with the Rockabilly community is how it provides a flattering formality while negating the element of surprise. There are no candid pictures of people that are always posing. But if they are comfortable enough to display and really exhibit themselves, their staging can reveal everything about who they are by articulating just exactly what they wish to be.

Jennifer Greenburg lives in Chicago and teaches at Columbia College Chicago. She participated in Light Work's Artist-in-Residence program in July 2005.

Kendra Greene is a writer in Chicago, where she manages the collections of the Museum of Contemporary Photography.
A Just Image