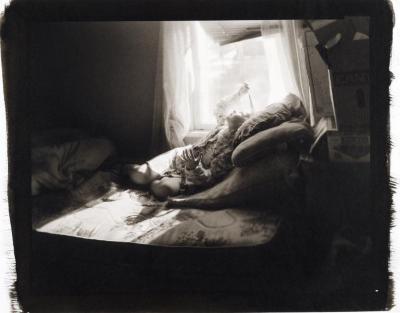 In all of Andrea Modica's photographs something is slightly askew. The full activity of every frame is never entirely revealed, nor ever completely concealed. Focus shifts from back to front and side to side. Hands obscure faces, and torsos stretch out of the frame or only appear in the background as distant details. Even when she abandons the devices of framing and focus to throw us off center, she can achieve the same results with the clarity of her juxtapositions, like the image of a young boy holding the severed tail of a goat. In these moments, and they occur throughout her work, Modica creates open-ended narratives where fact and fiction are merged and blurred in order to show us the rough edges of experience where uncertainty and caution meet anticipation and hope.

The work in this exhibition and catalogue includes images from Treadwell, an extended and ongoing project that has occupied Modica for over 15 years, along with seemingly random pictures made in a variety of locations, from the Italian countryside to the foothills of Colorado. Modica uses an 8x10 view camera and makes platinum palladium contact prints from her negatives. Both her camera and printing techniques are throwbacks to the late nineteenth and early twentieth centuries which give her work a timeless and ethereal look and feel. Even when we look hard for clues of time and place, the near absence of any evidence far outweighs the few times where a logo on tee shirt, a Halloween mask, or piece of period furniture appear in her pictures. Without these reference points Modica makes it difficult, and perhaps unnecessary, for us to attach our cultural baggage, or our understanding of photographs as a document, to her luminous images.

This timeless quality is an essential clue for entering her work. She is not telling us some specific information or showing us how something looks; she is inviting us into what she describes as a selfish process of risk and reward. In that process she gives as much as she takes. Where she chooses to go with her camera and who she chooses to photograph are as much about her appetite for the unknown and confronting her own fears as they are about revealing the stories of the people and places that inhabit her pictures

The camera can be an entry into places or people's lives that otherwise would be off limits. An 8x10 camera can be an extravagant stage to perform in front of and a good place to hide behind. In her series Treadwell, which is primarily an intense collaboration between Modica and a young girl named Barbara, Modica employees all these qualities of her camera to produce what Vince Aletti, writing in the Village Voice, describes as '…a metaphor for childhood as another country.' By using the camera as an entry into a world or reality so unlike her own, Modica reinvented her process of making pictures, and in Barbara found a refuge from her own everyday life. Her process begins with the desire to understand and embrace difference, and this approach has become as important to her work as any other consideration or concern.

The most recent work in the exhibition was made in Colorado where Modica lives. In these new pictures Modica again finds refuge in photographing children in collaborative theatrical narratives. She has also been making pictures around a slaughterhouse in rural Colorado, and with the exception of a series about minor league baseball players completed in the mid nineties, her work seems to have made a detour from childhood to death without a stop in the middle years. But the middle is where Modica is now, and the work that she has produced up until this point serves more to enlighten her outlook than merely advance a particular point of view. This stretch and this struggle both describes and defines her work. Her images keep us off balance and at the same time they draw us back into the center of a process that celebrates reaching beyond one's own experience.

Even when there are no people in her pictures we sense that Modica is stretching for something she has been told is beyond her grasp--carving perspective, depth, and an ominous mood from tangled branches, barren hillsides, or a roaring bonfire. Her landscapes can also reveal fantastic discoveries like a cow that has rolled over and died on an otherwise idyllic hillside or a horse that has come across the bones of a not too distant relative. The drama that Modica coaxes from the landscape is fully realized in her photographs where children take the stage. Clearly Barbara, from the Treadwell series is Modica's primary collaborator, but she is adept at drawing others into her circle so that the link between a picture of Barbara sitting in a chair at the edge of a forest in Upstate New York shouting or screaming up at the sky to unknown demons or heroes fits easily with a picture of a young boy in Colorado caught in Modica's slow shutter and reduced to a blur spinning out of control.

The territory that Modica covers in her work has been visited by many other photographers. Most are drawn to certain genres like landscape, portraiture, or narrative constructions in order to explore or celebrate specific passions, interests, or points of view. Throughout her career Modica has looked at those same genres only as a starting point to explore the unknown in the process of making a picture. While her techniques may be straightforward and time-tested, her pictures reveal that her clearest expression is realized in those moments where we all might be expected to lose control.


In 1991, Andrea Modica attended a minor league baseball game in the Oneonta Yankee's hometown stadium. She had always been a bit curious about the banners that fly across Main Street every spring and the countless stories in the local paper about the player's and their personified heroic efforts. As a spectator Modica wanted to join in. She was inspired by the form and the beauty of the athletes as they performed the game's spirited rituals, but was aware that she was distanced from this cultural phenomenon by her preconceived notions of the sport and the athlete. Her distance left her with the perception that she was observing a carnival spectacle of 'imported' males exhibiting their athleticism for the crowd. As she looked on, she desired to understand what attracted men to pursue baseball as a lifestyle.

Modica says it was her own confusion for this aspect of American male culture that created the impetus for her to do what she feared- frequent the ball field. She says, 'If a situation makes me this nervous, there must be something to learn.' Modica says she consistently photographs people who she doesn't understand, who she fears, or who she has prejudices against with the intention of breaking down her personal cultural assumptions. At the onset of this project, Modica was extremely aware of her notions of these athletes- the macho behavior, the power plays, the intrinsic qualities of the invincible male athlete. But what unfolds as Modica photographs is in opposition to her first notions. Modica's portraits show faces of players who reveal their tenderness, their vulnerability, and their compassion for one another. Modica's palladium-platinum prints, contact printed from 8 x 10' negatives, give a descriptive warmth and softness to her subjects. In her photographs they seem reminiscent of Dorothea Lange's migrant workers only this migrant farm team works a different field and harvests a different crop.

These portraits depict the duality of the minor league team's composition- the players' youthful naivete and, for other players, the tired look of experience. The players are in uniform or on the field, but Modica's photographs don't reveal the ideal fabled athlete. There are no cheering fans, no spectacular plays, no bitterness from defeat, but instead concrete walls and empty fields. She photographs the players in a setting outside the spectacle where the field of dreams has boundaries and emptiness. In this setting Modica's photographs distill the baseball card fantasies, story lines that fuel the notions of the great American hero, to a fable of boys trying to be men and middle-aged men holding on to a promise of youth.

Modica's portraits convey a woman's sensitivity to the struggle of underdogs while simultaneously imaging the strengths of such a pursuit. She engages in a symbolic act by entering a domain reserved primarily for men. In doing so, she exposes and learns about the psychology of the players, the roots of her cultural biases, and the foundations of her fears. At this location Modica discovers a common ground with athletes whose pursuits had before seemed so foreign to her. Their passion for the game, their personal and professional vulnerability, and their risks and dreams dispelled Modica's fear and replaced it with compassion for people whose arena is different from hers but whose goals are similar.

Andrea Modica lives in Oneonta, New York and participated in our Artist-in-Residence program from April 1-30, 1993.