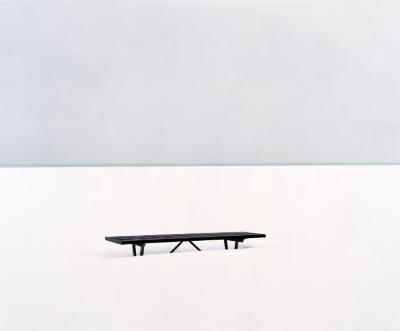 For a more recent CV or bio please visit the artist's website, http://www.lisamrobinson.com

When Lisa Robinson asked for a residency in a snowy month, her request seemed simple enough. Syracuse receives an average of 160 inches of snow each year. However, one week into her residency in February, the skies were still mostly blue with just a few snowflakes to tease her. We have since received a mediocre amount of snow in this unusually mild winter, and Lisa has had to drive to surrounding areas to photograph her calm, wintery landscapes. She has been photographing snowscapes since 2003, looking for man-made, singular objects blanketed in heavy layers of snow. She describes, “I have always been interested in the human presence that remains even in the absence of a human. The images from Snowbound describe a cultural landscape in which the objects of our recreation and occupation harmonize with the natural world while subtly restraining it.”
“Snowbound” was published by Kehrer Verlag and included in the Light Work Book Collector’s Program in 2008. PDN Photo Annual highlighted it among the Best Photography Books of 2007, Robert B. Woodward selected it as one of the best holiday books of the season in the Wall Street Journal, it was an official selection for the 2008 German Photo Book Award, and it received an honorable mention for the Photo España Book Award.  Images from Snowboundare included in such museum collections as the San Francisco Museum of Modern Art; Museum of Fine Arts, Houston; Nevada Museum of Art; Museum of Photographic Arts, San Diego; Portland Art Museum; the Ogden Museum of Southern Art; and Light Work.

Snowfall forces stillness. Daily routines are disrupted. Street and air traffic cease; a quiet descends, allowing us to hear what the world might have sounded like before 1900. By erasing familiar streets, sidewalks, and gardens, snowstorms create a palimpsest for us to decipher from our living room windows. The desolation and destructive potential of winter, the skeletal trees and absence of human activity, make it a season emblematic of death. Walking in a winter landscape can evoke contradictory feelings of dread and comfort. The cold emptiness terrifies; its still beauty soothes.

Lisa M. Robinson grew up in the heat of the South, which is why the cold of the North has become her subject these last few years, specifically the transformative power of snowstorms on the landscape. In her artist statement, she writes, “Growing up in a place where the summers are long, I could only imagine a world that turned white.” (1) Now living in New York, as well as traveling to places that promise snow, she has created an elegant series of photographs titled ‘Snowbound’ that makes one feel anything but bound. On the contrary, their minimal subject matter, serene compositions, and reduced palette expand the senses.

Venturing out alone with her camera and tripod, the photographer walks like an archaeologist, hunting for shards of visual poetry. Robinson explores her environment, she says, “as a haiku poet might, seeking beauty in plain, simple language by observing ordinary things closely.” (2)

In every image, Robinson lets the snow-laden sky merge with the earth exactly in the center of her photograph. There is both melancholy and tranquility in them, as the world seems bereft of people and activity. However, for this viewer, their absence is welcomed, since Robinson means to offer us a meditation. Her photographs are not unlike the nineteenth century Romantic landscape paintings by Caspar David Friedrich, who once wrote, “an artist should paint not only what he sees before him, but also what he sees within him.” (3) He was among the first Romantics to insist that art should truthfully render the world while also conveying a feeling about it. For Robinson the same is true. As in many of Friedrich’s canvases, the lower half of her picture plane grounds our feet in ‘terra firma,’ while the upper half carries our imaginations skyward. Yet, unlike the painter’s sometimes overwrought transposing of religion onto nature, Robinson’s images are cool not only in what they depict but also how. They are a step back from Friedrich’s existential brink in picturing both the thoughtful and the commonplace. A treehouse, site of make-believe and leafy summer refuge, stands exposed in the trunk of a snow swept apple tree in ‘Emergence.’ In ‘At Rest,’ Robinson is playful with life’s contradictions and expectations—the trademark flex of a backyard trampoline lies frozen stiff, altered but, come the sun, not defeated.

The reality of global warming makes manifestations of strong weather an ominous event. What looks like menacing, Norse gods descending on a Wagnerian landscape in ‘Valhalla’ are road signs encrusted in frozen spray, solidified in mid-air as it thundered off the lake. In ‘Breathe,’ a series of large gray disks—holes in the ice-packed ground—look like pores on the skin of Gaia. Fifty years from now, Robinson’s images might look naïve in their pleasurable aesthetic simplicity, stirring in future audiences the same nostalgia and incredulity we now have toward many nineteenth century photographs.

Ultimately Robinson’s photographs are optimistic. They take pleasure in small things we generally look through or drive past. ‘Snowbound’ delivers what one hopes to see (but is harder to find these days) in an emerging photographer—knowledge of her medium, a rich and varied inner life, fearlessness in vision, and an in-depth study of her chosen subject so that something can be revealed. This is currently so out of fashion it seems radical. Robinson’s photographs, when seen together, enfold the viewer in frozen tundra that is alive with metaphors that might be ironic or exultant, but never disaffected. Winter as the season of death is not denied here; but neither is the idea that renewed life is not far behind.

Lisa M. Robinson lives in Queens, NY. She participated in Light Work’s Artist-in-Residence program in February 2006. Her work can be found online at http://www.lisamrobinson.com/. Snowbound was published by Kehrer Verlag in 2007 and can be purchased through Light Work at http://www.lightwork.org/catalog/books.html/.

Carol McCusker lives in San Diego, CA, and is the curator of photography at the Museum of Photographic Arts.