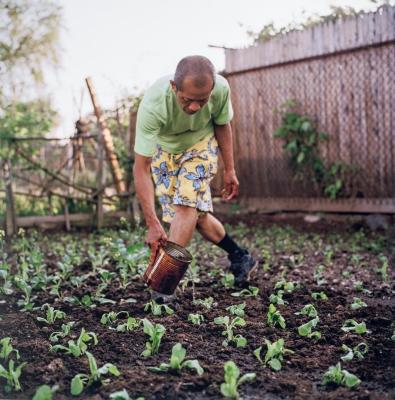 For a more recent CV or bio please visit the artist's website, http://lucasfoglia.com/

The world of Lucas Foglia’s series 'Re-Wilding' is filled with flesh, foliage, ideology, hardship, and seduction. Nestled deep within the lush wooded forests in the southeastern part of the United States stand heroic men, stalwart women, and uninhibited children living off of the land. Most build their own habitats; harvest natural medicines; and grow, hunt, and gather their food. Their existence appears devoid of extraneous wants or responsibilities. Their lives are challenging, their needs basic. Through the prism of Lucas Foglia’s lens, they communicate a sense of return, rebirth, and renewal.

Foglia’s photographs emerge from a tradition of heroic representations of the proletariat—specifically farmers, toilers, and harvesters of the earth’s bounty. The images, produced during extended visits to homes and communities in North Carolina, Virginia, Kentucky, Georgia, and Tennessee, depict individuals who have left mainstream life to adopt a wilderness or homesteading lifestyle, a social network which Foglia refers to as “Re-Wilding.” In deciding to live off the grid, these people embody a way of life that has inspired artists over the centuries, including Gustav Courbet, Andrew Wyeth, and Farm Securities Act photographers. Like Foglia, these artists depict their subjects on levels that evoke mythological and religious allegory.

There is a tremendous affinity and admiration held by Foglia for the people he photographs. His images are made with a deep knowledge of their various historic representational precursors and a kinship for the hardships that his subjects face. As with his previous series 'The Garden,' which portrays the disparate range of individuals, traditions, and cultures united through a shared stewarding of a community garden in Providence, RI, Foglia’s ongoing exploration and celebration of those who choose to establish a significant connection between themselves and the environment emerges from Foglia’s own upbringing on his family farm on Long Island. About his childhood, Foglia writes, “Influenced by the back-to-the-land movement of the 1960s, my parents maintained an agricultural lifestyle as malls and supermarkets developed around us. We heated with wood, grew and canned our food, and bartered plants for everything from shoes to dentistry.” The men and women who comprise the homes and communities in Foglia’s images, connected through their desired relationship with the natural world and humble acceptance of nature’s cycles, are Foglia’s protagonists.

Foglia’s subjects come to this way of life for a variety of reasons. For some Re-Wilding offers the opportunity to reject modern technology’s influences and its impact on the earth, while others seek to avoid what they perceive as intrusive government control. Still others hold deep convictions based on readings of apocalyptic religious texts. Some reject modern technology completely, while others embrace it, albeit with trepidation, utilizing modern tools like the Internet to advocate their lifestyle and educate others on primitive skills and wilderness living.

Foglia’s approach holds root in the mid-nineteenth century Realist movement led by the French artist Gustav Courbet, whose paintings called attention to social issues of the day. Courbet’s somber palettes and sometimes brutal imagery highlighted the harsh physicality of daily life; he created representations of everyday subject matter on a grand scale in which individual existence is depicted as a heroic gesture. Similarly, in his photograph 'Acorn with Possum Stew,' Foglia offers a representation of his subject that simultaneously mythologizes and depicts. Surrounded by thick forest branches, Acorn stands before us, half naked, contraposto, a cast iron pan in his left hand containing a possum for the evening meal. He looks to the camera, pausing as Foglia records his world. Acorn is Foglia’s proverbial Adam living in Eden, sustained and provided for through his surroundings.

Other photographs echo the approach of the American painter Andrew Wyeth, whose iconic representations of New England farm life in the mid-1900s present their subjects as preoccupied with the elements and their daily struggle, heroically ignorant of the artist’s gaze as he celebrates them. In 'Rita & Cora Aiming,' a mother dutifully and unapologetically trains her daughter on how to best attain sustenance and protect their home.

Foglia’s subjects appear uninhibited, often barely clad, and seemingly seductively wild. These individuals—particularly the adults—are far from naïve, passive subjects. They possess worldly knowledge and understand the complexities of their representation and their engagement with the photographer. They are, in fact, collaborators with Foglia in establishing the visual schema of these images.

In an age when our mechanical consumption seems to be rapidly taxing the world’s resources, and our societal mind/body disconnect is growing ever vaster, Foglia’s exploration in 'Re-Wilding' creates a reminder and perhaps a prophetic call to times lived not more simply but more elementally.

Lucas Foglia participated in Light Work’s Artist-in-Residence program in January 2007. His work can be viewed on his website at http://www.lucasfoglia.com/.

Ariel Shanberg is the executive director of the Center for Photography at Woodstock in Woodstock, NY.