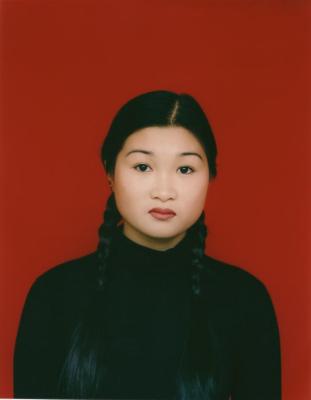 For a more recent CV or bio please visit the artist's website, www.yeelingtang.com

Yee Ling Tang has created a string of photo projects, each vibrant in color and excellent in technique, yet touching on a different aspect of humanity. She is curious about social behavior and its manifestation in body language. She is especially fascinated with body language vs spoken language, because, as she describes, the former does not require translation. While most of her work has been driven by vivacious colors, she is currently researching black-and-white methods that will take her work in a new direction. Yee Ling has participated in artist residencies in France, Sweden, China, Holland, and the U.S. She is preparing for exhibitions in Tokyo and Amsterdam. She was born in Hong Kong, but has lived in the Netherlands since she was a child.

The experience of moving to a different country and being identified as “other” can vary from person to person. For Yee Ling Tang the effect was startling. When she was only four, she moved from her native China with her mother and brother to join her father in the Netherlands. She did not talk for two years, while her brother relates having little or no traumatic memory of the move.

Perhaps her early experience of disconnecting from verbal expression provided a framework for Tang’s highly articulate sense of visual expression. Her profound response to divergent ethos does have direct connections to her subjects, which deal with social dynamics from both a personal and cultural perspective. Tang’s strong command of visual language can be seen in her exploration of the Western stereotype of young Asian women, as she employs the language of construct to de-construct. When we see ‘Ten Portraits,’ equalizing elements are at once noted for their limiting cultural implications while they also serve to differentiate each woman’s unique features. The relationship of sitter to photographer is expanded to the viewer in a triangle around the ideas of how cultural and gender identities are defined and perpetuated. Tang’s choice to show women of Asian descent with black hair braided in this traditional way, in front of an exclusively red environment, makes immediate reference to stereotypical notions of Asian culture. On the other hand, red is an important color in Chinese tradition, and the women’s direct gazes appear to derive power from it.

Tang’s intentional repetition of conforming black attire, along with her static and measured composition, raises the level of complexity for each subject. The high tension between conformity and unique distinction speaks to the inequality of perception versus understanding between people of societies, Western and Eastern, democratic and socialist. Tang’s aesthetic specificity forces the viewer’s hand, raising flags of complicity along with understanding. If the viewer experiences meaningful recognition of the iconic symbolism present in this series of portraits, the next logical step is likely to be a self-examination of their part in the process of defining or re-defining representations of cultural identity. Tang’s images also serve to highlight a viewpoint that while contemporary cultures have increasingly experienced a globally diverse presence within their borders, they may still lack an equally diverse vocabulary—instead continuing to operate from inherited perceptions of differing cultures that are limited to set definitions.

When Tang’s more recent series ‘To Lose the Idea of Dimensions’ is seen alongside images from ‘Ten Portraits,’ there is a noticeable absence of similar aesthetic elements to visually link these bodies of work. Whereas with ‘Ten Portraits’ there are a minimum of highly directed color and structural elements, Tang’s black-and-white images utilize a strategy of visual multiplicity, so that what stands out amid a chaotic mesh of details are carefully chosen elements—surrealistic manipulation of time, place, and scale—which point to human relationships within a shared physical environment. Tang has placed herself as the inquisitive agent operating in these pseudo environments. The images depict her search for larger meanings of how individuals perceive their roles in the physical environments in which they place themselves. Upon closer examination, these photographs can allow the viewer to move beyond their initial response to technique or style, and find psychologically charged commentaries that represent both native and foreign perspectives simultaneously. Tang’s role is largely present in the images, but seems personally removed, allowing a view on otherwise commonplace environments from a decidedly alien viewpoint.

Though the visual content of these two bodies of work remains distinct, there is a common theme in Tang’s work. If her early experience as a Chinese girl displaced in the Western world was a fearful one—her art now exhibits a fearless fascination with culturally driven perspectives and their agents of transformation. Whether Tang is making art in Eastern or Western hemispheres, she examines the particulars of each place, its time and its people. Her responses are photographs that offer views both unique and universal—reminding us that the dimension of ones experience determines how well one sees themselves and others.

Yee Ling Tang lives in Amsterdam, The Netherlands. She participated in Light Work’s Artist-in-Residence program in September 2006. Her images may be viewed on her website at http://www.yeelingtang.com/.