Mark Klett
Self Portrait with Saguero about my same age, Pinacate, Sonora, 1999 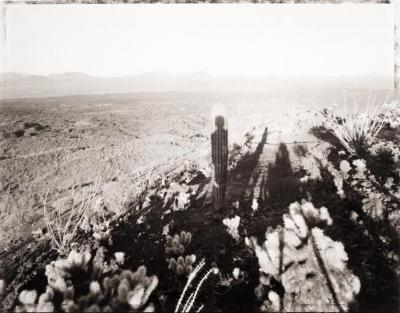 Mark Klett is a photographer whose background includes working as a geologist before turning to art practice. His interests include making new works that responds to historic images; creating projects that explore relationships between time, change and perception; and exploring the language of photographic media through technology.

Klett received fellowships from the Guggenheim Foundation, the National Endowment for the Arts, the Pollock- Krasner Foundation, the Buhl Foundation, and the Japan/US Friendship Commission. His work has been exhibited and published in the United States and internationally, and is held in over eighty museum collections worldwide including the Whitney Museum of American Art, The National Museum of American Art, the National Gallery of Art, the J. Paul Getty Museum, the Museum of Fine Arts, Houston, the Art Institute of Chicago, the San Francisco Museum of Modern Art, the Los Angeles County Museum of Art, the Center for Creative Photography, the Bibliotheque Nationale, Paris, the Victoria and Albert Museum, London, and the Moderna Museet, Stockholm.

He is the author of seventeen books including Drowned River, the Death and Rebirth of Glen Canyon on the Colorado, and El Camino del Diablo (Radius Books 2018 and 2016), Reconstructing the View: the Grand Canyon Photographs of Mark Klett and Byron Wolfe (University of California Press 2012), The Half Life of History and Saguaros (Radius Books 2011 and 2007), After the Ruins (University of California Press 2006), Yosemite in Time (with Byron Wolfe and Rebecca Solnit, Trinity University Press, 2005), Third Views, Second Sights (Museum of New Mexico Press 2004), Revealing Territory (University of New Mexico Press, 1990), and Second View, the Rephotographic Survey Project (University of New Mexico Press, 1984). Klett is Regents’ Professor of Art and Distinguished Sustainability Scholar at the School of Art, Herberger Institute for Design and the Arts at Arizona State University.

"The photo was made in Mexico at Pinnacate, their first nature reserve. The time was dawn, and my shadow was raking across the top of the cider cone I had climbed. I noticed that I could project it onto a small saguaro cactus, and did so for the picture. Saguaros are the symbol of the Sonoran Desert in this part of Mexico and my home state of Arizona just a few dozen miles to the north. Saguaros may grow to be 30 or 40 feet tall and live over two hundred years. This cactus was relatively young, about my same age though much younger in saguaro years than I was in human years. It was a reflection of differing perceptions of time, of life and the land."

Klett’s work is currently on view in group shows at the Autry Museum in Los Angeles, the Houston Museum of Fine Arts, the Art Museum of the University of Texas in El Paso. He has a solo exhibition on view at the University of Georgia in Athens, GA. His work has been exhibited at museums and galleries internationally, including the Cleveland Museum of Art; the National Museum of American Art in Washington, D.C.; the Center for Creative Photography in Tuscon, AZ; and the Photo Gallery International in Tokyo, Japan, among others.

Klett received his BS in geology from St. Lawrence University, and his MFA in photography from the Visual Studies Workshop. His work is included in permanent collections worldwide, including at the George Eastman House in Rochester, NY; the Museum of Modern Art, New York City; the Philadelphia Museum of Art; the Tokyo Metropolitan Museum of Photography, Tokyo; the Victoria and Albert Museum in London; and the Stedelijk Museum in Amsterdam, among others.
More of his work can be viewed at http://www.thirdview.org/3v/home/index.html/.