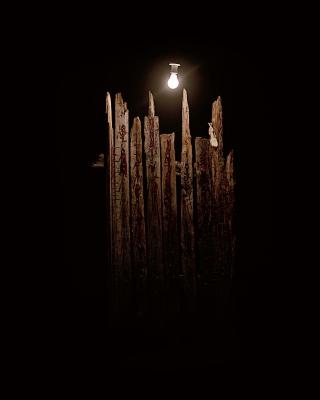 London-based Polish photographer and installation artist Elwira Jaglowska centers her work on everyday subjects, whether people or places. Using powerful implications provided in the mundane to comment on societal past and changes in a variety of cultures, Jaglowska notes her interest in highlighting that which is often “hard to articulate … difficult to understand due to varied cultural, ideological and economical backgrounds.” Her work styles include straight documentary and collage, using the latter to “create powerful hidden connections that draw viewers’ curiosity to find out more about [her] subject.”

Jaglowska received a BA with honors in Photography from London College of Communication, University of The Arts London in 2006 and comes to Light Work through our exchange program with Autograph ABP in London. During her month-long residency here, Jaglowska is busing making new work on location and in her studio at Syracuse University. We anxiously await the results of her efforts—to find how she will use the intriguing props our staff and board gladly rummaged to find for her work, among them: a straw hat, one human skeleton, and a full-size tree. Jaglowska presently lives and works in London.

Elwira Jaglowska is interested in the theatrical possibilities of documentary work. Hers is an interest hinged by a kind of anthropological remediation of her subjects either through collage or multimedia installation. In what she sees as “highly materialistic times,” Jaglowska’s work reclaims “those who are invisible, forgotten, overlooked, or simply unknown” and provides them a stage by way of her direction.

"Free State Prisoners" is centered on the survival story of Byron Downs Quinn, a Caribbean refugee whose experiences bear slavery, torture, and continuous flight from oppression. Unlike images from her previous series "Khakassia" and "Homeless"—in which the resemblance of straight or street photography brings together a narrative—the photographs of "Free State Prisoners" leave only arranged objects that beg curiosity more than convey information.

Stepping into the full installation of "Free State Prisoners," one immediately confronts photographs covering the floor with anonymous faces. To experience the project in whole requires the viewer to assume an active role of “walking over others” while approaching the nine large color photographs positioned around the room. Meanwhile, a voice is heard telling a story, compelling us to enter.

In contrast to the images on the floor, the photographs on the wall are mostly black; the light illuminates only select and small details that are stage set as props from a scene already acted out—a cowboy hat, a cooking pan, a tiny toy car, a pile of fish. Here Jaglowska exchanges the immediacy of human faces for a set of mysterious circumstances. Judging by the fragile voice permeating the room, it becomes clear that these are scenes from his circumstances, and they become haunting as it all intertwines.

Quinn’s story is laden with unsteady detail. In one image, a single overhead bulb lights a scene obscured by a rickety fence gate. In another, a rusty chain lies below a straw cowboy hat. Another depicts a human skull under an arrangement of stones. The objects create a looming sense of death, anguish, and imprisonment—a constant state of escape, as in the image of a guitar and blanket tucked under a bush; or they create some magical state, as in the photograph of a framed altar with food that reads “MERLIN.” Quinn reads along as words and images combine to reveal a bigger picture.

Jaglowska conveys a complex collage of one man’s continuous fight against adversity. We do not experience it directly, nor is there a sense we should act out against it—the work is a study in its aftermath, a concentrated inquiry into what can be gained from knowing the poignant story of someone who would otherwise be unknown. All the while we are stepping on so many other faces, other stories that could be as rich and full of detail. The realization sets in that even as we come to know one composite life, seas of lives are overlooked.

Two final objects remain—one, a photograph of Quinn himself, bowing as if to thank us for our attention, or to share an ineffable gesture of survival and hope beyond such a petrifying past. Second, a book of recent images of him brings us closer to his portrait, his expressions, and the experience worn on his face. It is a particularly engaging reflection of a current environment where the definition of torture is still debated—where brutality and neglect are emergently evident in all cultures—bringing us face to face with our connection to it no matter how far removed by the superficiality of a staged photograph. “With time,” SUnited Statesn Sontag wrote, “many staged photographs turn back into historical evidence—albeit of an impure kind—like most historical evidence.”1

Jaglowska’s restaged document is in the end a bittersweet redemption. It is not a group of photographs that pushes all responsibility at us, making us ask what the act of photography can possibly do beyond amplifying suffering to a generally comfortable, voyeuristic audience. It does not place guilt on the viewer for overlooking Byron Downs Quinn—or thoUnited Statesnds of other distinctively vital lives. Rather, within Jaglowska’s blend of documentary and drama, one unheard voice is given a stage to be seen and heard, becoming evidence, and thus making an otherwise forgotten life absolutely unforgettable.

Elwira Jaglowska lives in London, UK. Her residency was sponsored by Autograph ABP, also located in London. Jaglowska participated in Light Work’s Artist-in-Residence program in June 2007. Her work can be viewed at http://www.elwjag.com/.

John Aäsp is an artist and currently director of visual arts at Rockport Center for the Arts on the Texas Gulf Coast. His work can be viewed at http://www.johnaasp.com/.