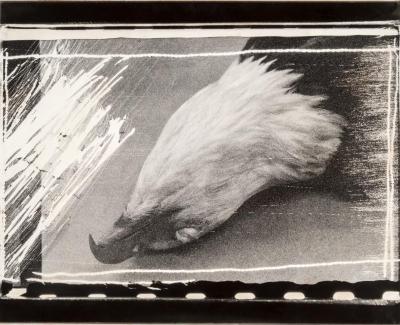 The works by John Wood in this exhibition and catalogue represent his production for the last several years, and include very recent images made this past summer. As you first enter the gallery or flip through the pages in the catalogue you may be overwhelmed by the variety of media, techniques, and subject matter. For John, this multiform production has been consistent for over 25 years. The diversity of his approach and simultaneous production of straight silver photographs, photo-collage and montage, abstract drawings, and book-works are the outgrowth of one consistent vision. That vision is a reflection of John’s life, his emotions and beliefs.

I considered curating an exhibition concentrating on one aspect of John’s work – the New Mexico drawings or the stained silver prints, for example – but decided against it. I wanted the exhibition to reflect his working process rather than a single isolated part of that process. In choosing pieces which represent the range of John’s interests, my intent is that the viewer will begin to grasp John’s working methods.

A “process oriented” approach to producing work, where one image suggests another, is a fluid and spontaneous method of image making. The experience and information obtained from making a particular image is as important as the image itself. John doesn’t start with a preconceived notion of what to make, rather his work is evidence of an ongoing evolutionary process.

The idea of the “process” of making art as integral to the deciphering of meaning is a notion espoused by Moholy Nagy at the Institute of Design (I.D.) in Chicago. The I.D. was founded by Moholy Nagy in 1937 on Bauhaus principles (it was originally called the New Bauhaus). Moholy Nagy believed that exploration, innovation and experimentation with materials and techniques were primary in the making of art. John Grimes writes in his article, “The New Vision in the New World” published in The New Vision: Forty Years of Photography at the Institute of Design:

“For Moholy the new artist had to emulate the scientist in his laboratory. Direct experimentation with the stuff of his art would be his method. Discoveries would lead to hypotheses about perceptual phenomena and the basis of communication that could be tested for their predictive validity. These discoveries would eventually give rise to a theory of form that would integrate art and science and revolutionize art, just as relativity had revolutionized physics. Modern science required a leap of faith, an absolute belief in the power of mathematics to describe and explain reality. Moholy’s formalist synthesis held that form had its own syntax (a ‘language of vision’ in Gyorgy Kepes’ version”), which is capable of revealing its meaning – both internal and external – in its own terms. Since the meaning of form was as yet unknown, each individual was free to interpret it for himself. On this level, art, architecture, advertising, and design were equal. In each activity the ‘designer’ would give form to unspecific facts, metaphors, and meanings through his medium’s unique vocabulary and transmit the results to a universal audience.”

Like all students, John absorbed those ideas and philosophies which were most adaptable to his personality and disposition. He was most certainly influenced by this idealistic view of “form revealing meaning,” and by the notion of a universal audience capable of deciphering visual codes and metaphors.

As you view the images displayed, you’ll begin to notice recurring themes imaged in varying ways. These themes point to enduring interests which John has explored for a number of years. One feels quite directly a conversation or interaction with John’s thought processes in viewing a group of his images. The same image rendered as a silver print may appear printed in negative or positive, or as a Xerox, or in different scale or color incorporated into a collage. Certain images thus become icons or symbols for developing visual language. His drawings, which may seem a total departure from the photographic work, make sense as the vision of one man when viewed in the context of the entire body of his work.

My reference in preparing this essay has been fifty slides representative of work John has completed within the last two years. Although some of these images may not be included in the actual exhibition, they are easily interchangeable with the images exhibited. That may seem an odd claim but it is indicative of a continuity in John’s production. Recurring themes, motifs, and icons appear again and again, obsessively explored and re-worked over the past 25 years. So, rather than analyze individual images, I’ll discuss what it is that I find compelling and provocative in John’s work.

His sketchbooks are an interesting place to begin because they provide a free-floating, un-self-conscious view of his interests and working methods. Her you might see images reminiscent of other cultures, predominately American Indian, e.g. Navajo and Pueblo. He has an abiding interest in traces of people from past cultures as evidenced in pictographs, cave dwellings and the landscape itself. Here, also, are images of shelters, of weaving patterns, of the systematic folding of paper, and an insistently recurring shape, the triangle. Additionally, one of the few places where words appear are in the sketch-books.

An artist’s sketchbooks often provide information not available or accessible in a finished piece. Notes and sketches isolate specific formal and personal interests, as well as reveal the testing of ideas. But, what interests me most are the lists of words which are free associative and reflect a vague, semi-conscious explanation of his intentions regarding the images he produces. They are personal and sensual, exploring nature, time, human relationships, and provide a link between John’s mind, emotions and imagery.

There appear to be a number of important themes in much of John’s work. An interest in nature, an exploration and exploitation of the medium, a concern with social issues, and the reference to himself. A compelling interest in nature and the patterning of natural form is most apparent in the colored landscape drawings, but it is an important element in a large portion of his other work. The manipulation and exploration of the medium is implicit in a process-oriented approach and is evidenced in his flexible, inventive use and combination of materials. His commitment to producing work about political issues is seen in many pieces produced over the years. One of these, August 6, 1985 (Hiroshima), is discussed later in this essay. And there are constant self-references in John’s work. He includes parts of his body in the frame, often his hands or feet, occasionally his face.

Three of these themes come together in the photographs of sand drawings which he made several years ago. The drawings were made by incising lines and marks in white sand. The incisions reveal black sand underneath, producing clearly delineated black lines on white or light gray textured ground. Most of these photographs of drawings within nature (the beach, seaweed, grasses, etc.) include an impression in the sand of John’s feet in the foreground. The drawings include images of folded paper, and grids of thumb marks, both recurring motifs and references to the medium, material, and support of his artmaking.

John always draws, whether in his sketchbooks, or in his photo-collages or in his large crayon and graphite pieces. He regularly travels to different environments – the southwest, the east coast shores, the mountains, etc. – searching for resonances and atmospheric color. John’s drawings have been stylistically similar for years and incorporate his interest in systems and kinetics, indicative of his rational approach as distilled from philosophies prevalent at the Institute of Design and from his experience as a mechanical draftsman.

The drawings range from very controlled and abstract, to expressive in the use of color and lavish in stroke and movement, to reductive, sparse and cartoonlike. This is again an example of John’s constant desire to explore various methods and techniques in the evolution of a specific subject matter. The use of color reflects the atmosphere, colors, and feel of a particular environment. Layered onto the color are John’s distinctive mark-making motifs. These often take the form of graphite lines systematically interconnected and linked to the prescribed movement of John’s hand. The intuitive and expressionistic elements of these drawings seem to contradict the notion of a scientific system, and in fact most of John’s work invokes a private and cryptic meaning rather than a rational and accessible one.

For years I have been intrigued by the recurrence of the triangle in John’s work, and often wondered about its significance. While John was a student at I.D., Buckminster Fuller visited and left a lasting impression. John feels that Fuller’s ideas informed his already developing interest in systems, patterning, and multiple ways that things come together. Fuller’s complex and elegant structural systems, based on the triangle and tetrahedron, were attractive to John, who had studied architectural engineering before entering the I.D.

A recent series of prints which use the triangle provocatively are August 6, 1985 (Hiroshima), made to commemorate the 40th anniversary of the bombing of Hiroshima. The piece is made up of four black and white photographs all depicting the same scene altered subtly as you mover form one to the next. The subject is a horizontal landscape printed in negative in which the sky consumes half of the frame. Each photo has two vertical “windows” at left and right edges, and suspended in the center of the frame is a paper triangle. Into the black sky and the white landscape are scratched frenetic lines creating a charged and foreboding atmosphere. In the first image, the triangle is seen on edge, as a line, and in each successive image it is gradually turned until fully revealed, overlaying the confusion of the landscape with a form that is both rational and enduring.

The photo-collages are the ground where John combines all the elements of his production, drawing, photography, folded paper, color, design, experiments with positive and negative prints, and more. In the photo-collages you’re apt to see many familiar and repeated images and materials, such as cacti, pre-historic handprints, cave pictographs of a dog, a 1950s car that John used to own, the ever-present turning, transforming paper triangle, repetitious blobs of hand-made paper, friends and family, whales, etc. He is a virtuoso of invention, sorting through metaphoric files of imagery and cutting and pasting them together to form collages. This is a world literally designed and constructed out of the stuff of John’s life and presented to us in fragments, challenging us to decipher the code.

After viewing a number of John’s works, specific objects become familiar, like old friends, and the plethora of techniques, devices and seemingly incongruous imagery begin to suggest a unified and consistent meaning. We then can step into John’s world, referencing the past, nature and personal relationships, the brutality and irony of our present-day world, and draw our own conclusions.

The visual eloquence achieved in the substantial body of work that John has produced is remarkable. His significance as an artist lies in the continuity and consistency of his career and the innovative and provocative nature of his images.

Nancy Gonchar is Curator at the University Art Gallery of the State University of New York at Binghamton. She has curated numerous exhibitions and is currently co-curating an exhibition titled, Feminist Photo-Graphics organized in conjunction with “Viewpoints: A Conference on Women, Culture, and Public Media” to be held at Hunter College in November. Prior to her present position she was Gallery Director at the Visual Studies Workshop in Rochester.