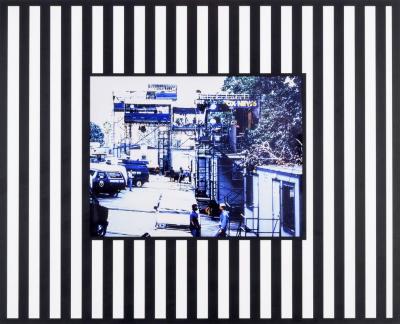 Warren Neidich is an American artist who lives and works in Los Angeles as well as Berlin. He has received numerous awards and exhibited both in the U.S. and internationally. Neidich participated in Light Work’s Artist-in-Residence program in August, 2003.

Warren Neidich is a trained scientist and an accomplished artist/writer/theorist whose latest experiments use sound barriers as subjects. His recent series of photographs isolates these massive architectural elements within their surrounding environments. The images carefully capture these distinct designs while conveying a certain silence and solitude. This project relates to an earlier body of work from the early ‘90s (titled Sound Wall) where he documented performances along sound barriers on New Jersey’s Route 80.

Always traveling, mapping, and exploring, Neidich has discovered a wealth of material lurking by the road (or tracks). His sensitivity to signage often prevails, adding both color and connectivity to his compositions. Europe, by far, offers the best examples of these structures—it seems the U.S. doesn’t yet pack the same punch in this realm of Division of Transportation design. Neidich has found intriguing “specimens” in uncommon places to conduct both his visual and perceptual experiments. In these photographs, he appears to simultaneously test the limits of protection and permeability, of sound and silence.

Holland provided Neidich with plenty of pathways to document. Through colors and symbols, the multitude of signage in Membrane, Breda screams: DO NOT ENTER!, but the endless curving, tilting glass barrier begs the viewer to travel down that road. The complexity continues with a series of traversing high-power lines that systematically cut across the composition. Breda, Synthesia takes the project to the other side of the tracks using an infinite perspective of the rails and overhanging hardware coupled with the bizarrely bent cement barrier to the left. The wall protects a cluster of homes from the nearby noise and introduces the reminder that this form has an important function.

The brutal brick barrier in Near Potsdam shields an enormous housing project from the highway on-ramp. Shot on a glaring midsummer day, the graffiti plastered on the foreboding angular wall adds a human touch, softening it somewhat. Here you see the distant stream of traffic, but the scene somehow remains silent. “In fact,” Neidich muses, “silence is a sound barrier, an organ of reception, deflection, and production.” Perhaps the most seductive and suggestive of the images featured is Dordrect, Nautilus. The telling title leads us into its close-to-crashing wave curve with gravity-defying Gaudí-esque glee. Neidich shot from the breakdown lane, conveying a high-velocity factor that is missing from the other work.

Interestingly, the latest installment in this series of experiments is Silent: A State of Being, a recently realized sound barrier by Neidich. The project was a collaboration with Elena Bajo, and was part of the Madrid Abierto Public Sculpture Competition. The work is a social sculpture and demands interaction. “Architecture connects with the imagination and the unconscious and thus is related to the way neural networks are sculpted by unforeseen and elicit formations of the real/virtual interface of which buildings and structures form a part,” Neidich elaborates. With this “concept” barrier, participants realize how architecture now taps a diverse array of disciplines and cross-pollinates culturally. The new photographs and Silent are all related to each other.

As Neidich queries: Do these barriers really “allow for an environment less caustic and a place where thinking and contemplation is possible?” One can only hope the answer is “yes.” His selection of walls and the titles that accompany them leans toward the concept that a highly aesthetic protective structure can also offer a somewhat permeable resistance. In the end, Neidich finds a way to explore and experiment, and share his findings in a beautiful, compelling manner.

Warren Neidich is a visiting artist in Visual Arts and the ACE-AHRB Fellow of the Arts Council of Britain in the Department of Computing at Goldsmith's College, London. His recent book Blow-up: Photography, Cinema and the Brain was published by DAP and the Ford Foundation.

Tracey Hummer is a New York-based writer and editor covering art, architecture, and design. She is a frequent contributor to Art in America and a former managing editor of Artforum.