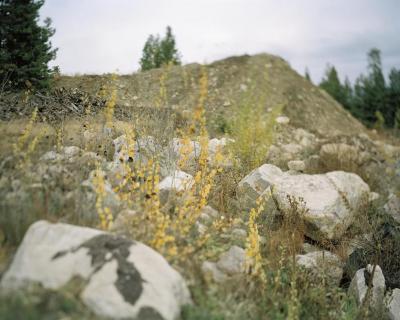 For a more recent CV or bio please visit the artist's website, www.askew-view.com

Stephen Chalmers spent his residency working on his new series, Dump Sites. Chalmers uses Freedom of Information searches of police reports, along with crime scene photographs, prosecutor reports, and true crime novels to research the locations where serial killers in the western states have disposed of their victims’ bodies. Using this information in conjunction with mapping software, Global Positioning System (GPS) technology, and Google Maps, he pinpoints and then visits these psychologically charged locations, called “Dump Sites” by law enforcement authorities. The images he produces contain no iconic signifier that the image in question is the location of a body dump site—other than the title, which only suggests the name and age of the victim.

Stephen Chalmers has a BS in Psychology (Pre-Medical) and also a BA in Photography from the University of Louisville, and an MFA in Cinema and Photography from Southern Illinois University. He has been an emergency medical technician, taught gang-affected children photography, and worked as a counselor to severely emotionally disturbed children. He now lives in Spokane, WA, and is currently a professor of photography and digital media at Washington State University in Pullman. Chalmers has exhibited widely.

Chalmers earned his MFA in Cinema and Photography from Southern Illinois University and was professor of Photography and Digital Media in Washington for eight years. Additional biographical information, selections from his projects, and contact information can be found at his website at www.askew-view.com.

Stephen Chalmers photographs sites on the West Coast of America where serial killers dumped their victims, producing images that are haunted with the final experiences of the murdered. With violence obscured by the passage of time and often a distinct natural beauty—wilderness areas being ideal dumping places—Chalmers’ pictures challenge photography’s ability to expose the spectral history of a location and the knowledge of its viewers. At the same time, his series Dump Sites also taps into America’s obsession with murder and crime.

Chalmers is fascinated with how some sites of trauma are memorialized with a plaque, a cross, or flowers, while others simply return to their natural state. In a previous photographic project, titled In Memoriam and commenced while he was working as an emergency medical technician, Chalmers returned to accident sites days later to witness and document roadside memorials. In the Dump Sites series, there are no memorials. He learns of the locations by reading the public records of closed serial killer cases and looks at the investigative photographs on file. Utilizing Google Earth and GPS coordinates, he determines the exact spot where the bodies were found and then visits the location with a large-format camera. In an effort to lure the viewers into his pictures, Chalmers manipulates the plane of focus so that the only sharp area of the picture is the ground where the body was found. The effect produces a slightly eerie, childlike perspective with sensitivity to the victim who was left there—a far cry from the photographs made by investigators for purposes of neutral documentation.

Chalmers knows that the victim is often overshadowed by the drama of the killer’s story, and he wants to refocus respect and attention on the victim and his or her family. In the words of Eric Schlosser, who wrote an in-depth article on America’s fascination with serial murders, “Most serial killers are impelled by a craving for power, by a desire for a sort of control over life and death that is usually attributed to God. When the murderer is the protagonist of a story, we can vicariously experience that power. The victim is a defeated soul, a loser in this contest of strength. Perhaps it is easier to identify with the murderer. To do otherwise means choosing the side of the powerless—and confronting some unsettling truths.”1 To draw attention to these complexities, Chalmers chooses to make the victim the protagonist. He does not record the name of the serial killer or the location of the actual murders.

We normally define physical places with intangible, invisible human experience and knowledge. Without this knowledge, we simply consider pictures of places formally intriguing or picturesque. For example, Joel Sternfeld’s photographs of socially and politically charged sites in America, and Taryn Simon’s portraits of people wrongfully convicted of crimes, are all accompanied by detailed captions. Both photographers use words to give significant weight to the pictures, leaving no room for misunderstanding their intent.

In Dump Sites the only information Chalmers gives with the pictures are the names and ages of the victims. Like photographs themselves, these few words give us the impression that we know more than we do. From the title William Neer (10) and Cole Neer (11), we deduce that brothers, one year apart in age, were murdered and left on this site. We learn no more from the image. The plane of focus leads the viewer down a path reminiscent of Hansel and Gretel, a story both playful and deadly. Chalmers, however, is incapable of seeing this site with naïve eyes. He knows the entire story and why he is there to document it. His image projects the story as he knows it without evidence or words so that the viewer’s imagination can create its own version of the story. He knows that before they were murdered the boys had spent the afternoon collecting golf balls for money and were on their bikes taking a shortcut through the park because they were late for dinner. The photographer withholds fuller explanation of the backstory, as it might dilute the emotional impact of what we do know. It is Chalmers’ hope that these well-crafted and engaging pictures will act as the overdue and deserved memorial for the victims and their families. And in a larger sense, cause us to appreciate and question photographic evidence of our capability for both evil and fascination with evil.

Stephen Chalmers lives in Spokane, WA. He participated in Light Work’s Artist-in-Residence program in October 2007. His work can be seen at www.askew-view.com.

Undertaking a project that deals with death is a risky endeavor, despite photography’s long-standing associations with the topic. An artist assumes many challenges with such work, not the least of which are the suspicious queries from viewers who wonder why someone would want to spend precious creativity addressing a topic that most people spend their whole lives trying to forget.

A good artist, one who really seeks, ends up discovering things that other people may not want to know, at least not at first. Sharing this knowledge in a way that makes others want and need to know it too becomes the driving force of the enterprise.

Photographer Stephen Chalmers has faced this challenge more than once in his multi-faceted career. In 2000, Chalmers, who is a trained social worker, former emergency medical technician, and professor, began photographing roadside memorials for his project In Memoriam. This project established several of the same themes and working methods that would later be further explored in Unmarked.

In Memoriam was started at a time when Chalmers was doing a lot of long distance driving, including moving across country to begin teaching as a professor in Washington. Occasionally he would see a memorial at the side of the road and would stop. He then went through the laborious process of making an image at the site using a large-format camera, no small feat under ideal conditions but almost miraculous with traffic whizzing by at sixty miles per hour. After developing the film, if the image interested him, Chalmers used the GPS coordinates he had taken at the site to find businesses and people who could help him do extensive research about the accident that preceded the memorial. Conceptually, by making a photographic record of a temporary memorial, Chalmers creates a lasting link between life-and-death events and the land. By inviting us to gaze directly on the residue of untimely and tragic deaths, Chalmers gives us courage to confront our fears about the end of life and its remembrance.

Tragedy was far from Chalmers’ mind the day he had an experience that would serve as the genesis for Unmarked. The artist and his partner Diane went out for a hike on a gorgeous fall day on Tiger Mountain in Washington State. Later that same day, a friend told them that a serial killer had left the heads of three of his victims near the trails they had been hiking.

The contradiction between the beautiful landscape on Tiger Mountain and this horrific story became a lens through which Chalmers began to explore the terrain of the Pacific Northwest, a region endowed with more than its fair share of serial killer cases. More important was the contradiction apparent in memorializing some sites of death and not others. In the cases of the previous series, in which the decedents had perished in automobile accidents, the people left behind to mourn went to great lengths to erect visible memorials. Most of these memorials, although illegal, were allowed to stand out of deference in a social sign of acceptance.

In contrast, the sites where serial killer victims were placed remained largely unmarked if not unremembered by those closest to the tragedies. These places have a name—dumpsites—a term that comes from the science of forensics and has filtered into the vernacular with the help of TV crime shows. The connotations of this term hit a sensitive point: the people who died here were thrown away in an act of violence. That is a hard fact to confront, even as an outside observer. Facing this uneasy fact is what gives the images in Unmarked their agency. Acknowledging these sites and the people who died there through his images, Chalmers lifts a stigma that unceremoniously draws a line of remembrance between those who died by the intentional acts of another and those who did not. Unmarked returns remembrance of death from its deliverer to its rightful owner.

Although infamous acts may have driven Chalmers to the places he photographed, his focus throughout the project remains on the victim, both metaphorically and literally. Chalmers gathered a team of assistants to help him research potential sites; thousands of pages worth of trial records, police reports, and non-fiction books were combed through to determine the exact locations where a body was found.

The precise coordinates of the body remain important because this is where a seminal act of transcendence occurred. This is where an all-important question for those left behind was answered: their friend, son or daughter, husband or wife, colleague or neighbor was finally found here. This is where the dignity of the victim, his or her loved ones, and ultimately the land was restored and allowed to begin the painful process of healing. Chalmers’ use of selective focus literally trains our eyes on the victim, whose absence references the passage of time and the unintentional fading of memory.

In most cases, because Chalmers made the images long after the fact of the crime, there is no observable evidence in the photograph itself to evoke the memory of what happened here or the person who experienced it. A fascination with
infamy is not indulged by learning the name of the killer, only the name of the victim. Likewise the sites, although they are beautiful, are somewhat generic. Nor do we learn any clue about the histories that brought Chalmers to the site in the first place. We are left only with quiet remembrance.

In Unmarked, Chalmers presents beautiful but ambiguous landscapes that seem to conflict with our certain knowledge that something terrible happened at these sites. While Chalmers treads on sensitive ground as he explores and documents dumpsites in the Pacific Northwest and beyond, he hopes to exchange sensational headlines and the inevitable scandal tied to such sites with something more meaningful. Instead, he offers an elegant memorial that shifts our gaze away from infamy and back to the humanity of the victims.