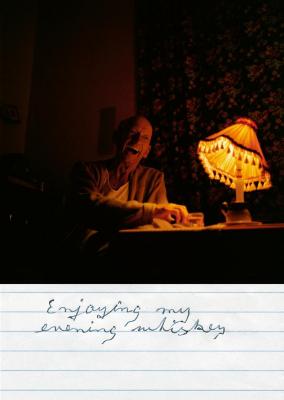 KayLynn Deveney’s residency at Light Work allowed her to realize her ambitious goal to scan and print over one hundred negatives in preparation for her book The Day-to-Day Life of Albert Hastings. Her project with Albert Hastings began when he was eighty-five years old, and KayLynn moved near his small flat in Wales. She recognized the preciousness of the rituals and routines that made up Bert’s life. Their friendship progressed over time as KayLynn photographed many facets of Bert’s day. Together they developed an illuminating method of storytelling that combines her images and his handwritten text. Bert’s handwriting provides a profoundly poignant narrative of aging, living alone, and the small things that provide comfort and meaning in our daily lives. Albert and KayLynn maintained their friendship via telephone and post, until the recent news of his death in January 2007. He was ninety-one. KayLynn Deveney holds an MA from the University of Wales and a BA from the University of New Mexico. She has exhibited nationally and in England. She currently lives in Albuquerque, NM and is pursuing a practice-based PhD in Photography from the University of Wales, Newport.

Documentary is subjective. There is, as KayLynn Deveney points out in the preface to her remarkable book, ‘The Day-to-Day Life of Albert Hastings,’ no "single 'true story' about any one of us." (1) Deveney's portrayal of a nonagenarian male, Bert, a general engineer, living alone in a small flat, celebrates a life. It offers a subtle, sensitive, and intimate portrait.

Documentary and portrait photography have often been drawn to difference. The histories of the genres entail a whole abject parade of 'outsider' types: the poor, the socially disadvantaged, the maligned, abused, the disempowered, the vulnerable. Bert potentially fits the outsider category, but Deveney refuses such a reduction. Her project is one that looks to the ideals of respect and dignity. British culture is notorious for its neglect and abuse of the elderly. There are signs and evidence of neglect in these pictures, but there is much more too. Deveney gets close to her subject. Her photographs form a point of dialogue and exchange with Bert. They are testimony to a growing relationship and friendship. The small color prints she takes are returned and shown to her subject. She talks about them with him and asks him to caption them. Augmented by his handwritten comments about her pictures, they are given a particularly subjective and expressive frame. Such exchanges and strategies are not new to photography. Danny Lyon's groundbreaking book ‘Conversations with the Dead’ draws upon the letters and drawings of the prisoner Billy McCune to form a humane representation, in contrast to the repressive Texas prison system. (2) But Deveney goes one step further in allowing the photographs themselves to become the conversation point, as if they are discussing pictures in a family album. The photographs become intimate, and privatized as a result. Family album photographs are often talked about in terms of what is lost and absent; they become cues to reverie. Deveney's pictures do not function this way. When she shows them to Bert what they are showing him is his present life, not the past.

Deveney says it was the sense of vitality and presence that drew her to her subject. And while some pictures show him bed-ridden in hospital, the overriding note is affirmative. He is even shown laughing, and laughter is rare in the portrait and documentary tradition.

In her pictures, small things take on value. The photographs themselves circulated between the two as small hand-held prints, as animate and animated conversation pieces. Bert has mechanical interests and his concern with detail and measurement is shown in his drawings of clocks and mechanisms that Deveney also reproduces in the book. They serve as reminders of his working life. Pictures of flowers, providing colorful flourishes in the book, both as double-page spreads and as single-page captioned images, also reflect his interests and pleasures. One photograph shows the way he has repaired what he describes as a "wind broken Daffodil." There is a danger, of course, that all this can become too sentimental. But Deveney is careful enough to remind us of the monotony of this life. "The blaze of bluebells by the main entrance," is to be set against that sense of marking time, of filling up the tedium of the days, shown through the inclusion of reproductions of Bert's meticulous lists of the TV programs featured on the channel he most often watches.

Against a sociological and anthropological prying curiosity, Deveney's concern is with the affective and emotive possibilities of the medium. The quality of light in her pictures, often warm and colorful, and the softened focus, temper the cold gaze of the camera. Reflections and partially occluded views recur. One shows Bert silhouetted before a window, his witty remark neatly capturing the picture's ethereal quality: "I'm not talking to a ghost, I'm opening the curtains." It's a fitting last photograph in the book, edged by the inevitable sense of her elderly subject's own closeness to death and photography's ultimate impossibility of fully bringing him into picture.

In Memoriam: Albert Hastings passed away on February 3, 2007 during the production of this publication. As was his wish, he was buried with his wife, who passed away in 1958.

KayLynn Deveney lives in Albuquerque, NM. She participated in Light Work's Artist-in-Residence program in November 2006. Her photographs and information about her book, The Day-to-Day Life of Albert Hastings, can be found on her website at http://www.kaylynndeveney.com/.

Mark Durden is a reader in history and theory of photography and program leader in photography (Hons) at the University of Derby, United Kingdom.