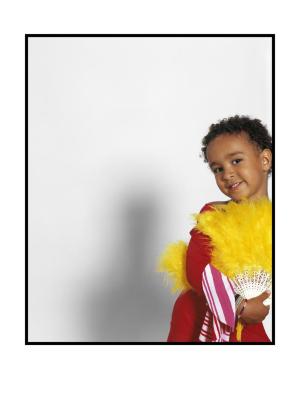 Lola Flash plans to use her residency to refine scans and prints of her series [sur]passing. She also foresees shooting images towards two new bodies of work, entitled epicene and quartet. All three series reflect Flash’s ongoing obsession with boundaries and the physical and ideological areas that exist concerning those boundaries. Begun in 2002, [sur]passing examines how skin color impacts black identity both in real life and in front of the camera. With the portraits in epicene, Flash depicts a mosaic of subjects who have challenged societal confines, including those of race, class, and gender. Photographed in various cities in the United States and abroad, quartet looks at the interstitial places that comprise these cities and define the lives of their inhabitants.

Flash was born in the United States and is of African and Native American heritage. She spent ten years in London, where she regularly exhibited her work and also attained her MA. A classic Flash photograph, Stay Afloat, Use a Rubber, is part of London’s Victoria and Albert Museum collection. She is now based in New York where she continues to teach and create.

Lola Flash’s series epicene, a name which refers to loss of gender distinction, celebrates intersexuality, and by extension, other ways of being-in-between. That kind of territory is intimately familiar to Flash, a lesbian artist born in the United States, with
African and Native American roots. “It’s a funny place to be—being a black dyke,” says Flash. “I’m so concerned with the boundaries, the borders, the in-between space.” 1

Her area of preoccupation—Flash calls it the interstitial space—is a place where barriers can block connections to the primary venues of human exchange. In a daily sense, obstacles might involve exclusion from political discourse, under-representation in the art world, economic marginalization, and even self-censorship in response to the status of
being different.

However, the interstitial space also presents sublime opportunities for communication and growth— if viewers are willing to reevaluate how they see. Flash believes that, beyond a passive look, to see is to grasp the subjects toward whom we direct our gaze. More than a glance, to see is to understand, and this activity finds its most potent expression in the experience of observing people who might be considered unordinary.

Photography, the preferred medium for Flash, offers an especially acute way to facilitate this change in vision. Far from the unrelenting pace of most people’s daily lives, photos capture points in time and gently but persistently invite the viewer to examine what they have to say.

The subjects in epicene represent a range of ages, backgrounds, and sizes. In addition, each brings some kind of difference or departure from the visual norm based on his or her unconventional presentation of gender, race, or class. Flash seeks her subjects starting from a personal place that allows her to see a little bit of herself in each. This mutual identification helps the artist achieve one of her primary goals in this work: to include those who have been left out and make the invisible seen.

Flash took the first photo of the epicene series in March 2008 featuring an androgynous male acquaintance from Sweden. Since then, she has produced about eighteen portraits, shot in Syracuse, NY, and New York City, with subjects she knows and also strangers who command her attention. The common criterion for the participants is that they are “beautiful,” which is, as understood by her, someone comfortably versed with the in-between terrain.

No special preparation is required of the subjects. In fact, they are encouraged to arrive in the manner that they feel most reflects their true selves. To Flash, it is more important for the subjects to feel comfortable and good about what they wear than for her to have a preconceived idea about what they should look like.

The spontaneity Flash strives to create contributes to a climate of authentic freedom, like when Tanya naturally removed her shirt to reveal a colorful stream of tattoos, or when Tenzin toyed with gender roles in the innocent way only a four-year old can. “He’s really embraced his girlie side,” says Flash. “He asked his mom to get the feather. He wore his sister’s dress.”

Though each portrait in epicene depicts a unique divergence from the standard, all share a defiance of one final preconceived notion. Each subject photographed by Flash rejects any sense of marginalization about his or her position on the boundary. That may be the most important part of the series for Flash: showing the world through her photographs that her subjects seem healthy and happy.

Lola Flash spent over a decade living and working in London. She now resides in New York City. She participated in Light Work’s Artist-in-Residence Program in August 2008. Her work can be viewed at www.lolaflash.com.

Julie Bolcer is a contributing writer for The Advocate magazine and advocate.com, which covers LGBT news