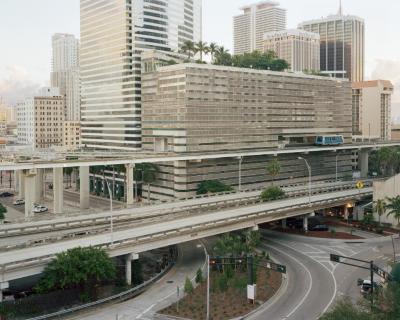 For a more recent CV or bio please visit the artist's website, www.scottconarroe.com

Scott Conarroe spent September through December 2007 working on a photographic study of North America’s rail infrastructure, and he is dedicating his residency at Light Work to digitally scanning and printing these images. In Conarroe’s words, “At this point in history, railroads connecting the settlements and mythic landscapes of this continent exist in various states from development opportunity to stubborn lifeline to artifact.” This project has taken him through both urban and rural areas. Conarroe believes that the changes in rail travel over time can be discussed in relation to topics of climate change, globalization, as well as urban sprawl, and that the popularity of rail travel may grow given the difficulties of the current car culture. This project was supported by a Canada Council for the Arts Grant which Conarroe received in 2007.

Conarroe obtained his BFA from Emily Carr Institute of Art and Design in Vancouver, BC, and his MFA from Nova Scotia College of Art and Design in Halifax, NS. His photographs have been exhibited internationally, and his work is featured in the permanent collections at Mt. St. Vincent’s University Art Gallery in Halifax, NS; Kitchener/Waterloo Art Gallery in Kitchener, Ontario; and multiple private collections.

The American rail system once connected our country physically, economically, and mythically by shaping the land and the lives of the people who lived there. Looking at the rail’s present state of disrepair and neglect in many communities, it is sometimes hard to remember America’s once strong identification with the rail, both industrially and psychologically. The railroad—at one time the iconic symbol of a rugged pioneer mentality—has long ago given way to the car as the defining symbol of American individualism.

Outside of major urban areas, most Americans simply have little or no relationship with trains anymore, except perhaps for a vague feeling of loss as we watch the occasional freight train trundle by in the distance. Many of Scott Conarroe’s images seem to capture our current relationship to the rails: The tracks are still there, but we are long gone.

In his series By Rail, Conarroe attempts to reawaken a connection among people, places, and a certain spirit of adventure still latent in the sight of train tracks. With few exceptions, trains are not seen in the work—quite possibly an indication of our declining connection to the railroad and perhaps also to North America’s waning industrial prowess.

Even less frequently do we see people in Conarroe’s images. The presence of the passengers that trains once served is often insinuated through the inclusion of deserted detritus next to the tracks—the cast-off blue plastic container in Suburb or the sad, lonely, and faded table and chairs in Patio Set, for example. These lifeless articles also do, however, remind us of the lingering power of the railroads in our everyday language, as living on the “wrong side of the tracks” still resonates with the average American as a definitive and dangerous turn of speech.

But even in this desolate landscape, Conarroe brings a sense of hope about the lost romance of the rail. As tracks wind their way past subdivisions and housing complexes, visually and thematically distanced from the everyday life of their inhabitants, Conarroe takes great care to bathe his scenes in a warm, utterly rich light. Although the images tend to be eerily empty of people and trains, the landscapes they depict are laden with detail and nostalgia in the ascending light of dawn in which many of his photographs are taken. This light somehow performs the magic of transporting us back to a time of greater power and hope for the railroads, when the system was an alive and vital part of our everyday economy and ourselves.

Only a few of Conarroe’s images hint at any resurgent, real interest in getting people back on board. But even in images like Monorail Station, there is a hint of sadness for the once great stature of trains. Here, the train car no longer seduces its passengers with an open-ended path to a new frontier. Instead, the track appears encased in a cityscape with no view of a horizon in sight. While the image offers a different kind of beauty, less wide open and a little more reminiscent of Disneyland or Land of Tomorrow, the monorail delivers only a short journey between well-plotted points A and B on an elevated track that has lost any real connection to the land.

Ultimately, it may not be our nostalgic longing for train travel that reignites it as a popular form of conveyance for people. The current economic climate, with its rising fuel and energy prices, makes the excessive cost of a long journey by car less and less attractive, and more importantly, less financially feasible. The promising reinvestment in railroads as a popular alternative to the highways offers the hope of a more efficient, cost-effective way to get out into the country. Perhaps it is not the end of the day for trains in America, but the beginning of a new one that will lead to a renaissance for rail. Maybe then, I, like many Americans, will be able to relive fondly-remembered moments of sitting and watching the trains go by.

Scott Conarroe lives in Toronto. He was a Light Work Artist-in-Residence in May 2008. His work can be seen at
www.scottconarroe.com.