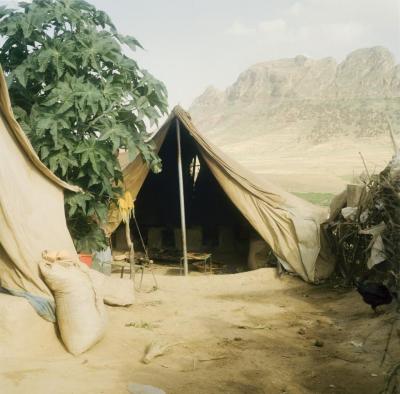 London-based artist Admas Habteslasie comes to the Light Work Artist-in-Residence program through Autograph ABP. He plans to use his residency to digitally scan and print images from his series Limbo. This work looks at the East African country of Eritrea, a country that is suspended in limbo between war and peace. Eritrea warred with Ethiopia for thirty years before gaining independence in 1991. Then, in 1998, they entered another war with Ethiopia over the border town of Badme, which both countries claimed to be their own. The war lasted two years, and has since left the people of Eritrea waiting for life to improve. According to Habteslasie, “Transitory states become permanent; empty villas, destroyed old buildings and unfinished new buildings dot the landscape, monuments to the suspension of history. The collision between Eritrea’s proud historical narrative and the bleak ennui of the present has produced an obsessive focus on the future. Reconstruction and infrastructure development are energetically driven forward whilst the economy remains essentially shut off from the outside world.”

Admas Habteslasie received his MA from the London College of Communication in photojournalism and documentary photography. His photographic projects look at the ideas of identity and history, and reevaluation of our relationship with historical process. Each year Light Work welcomes one Artist-in-Residence selected through Autograph ABP, a charity that works internationally to educate the public about photography, with a particular emphasis on issues of cultural identity and human rights.

Photographs are possessed of a particular kind of limitation. As much as they can describe what takes place in front of the camera, they cannot give us a sense of what transpired before the moment of exposure. Placing the immovable frame around the situation only further truncates the experience of the larger world that the photograph is derived from. This is, of course, what it means to make photographs: to subjectively render a piece of the world through which the photographer can point us in the direction of his or her concerns. Sometimes, though, we feel like we need more. In the face of tragedy we tend to want photographs to give us the visual story, to spell out what has happened and, perhaps most importantly, to indicate through the photographer’s point of view just how we are supposed to feel and respond.

There is, of course, a long history of just such photographs, and they have variably served their purpose in eliciting useful public sympathy or outrage. There is a long history, too, of photographic representations of Africa and other “third world” countries. Throughout its long, often colonially induced history of tragedy and upheaval, Africa has been represented as a variably “dark continent,” shielded from Western eyes save for the images that photographs alone could provide. And what images emerged often only heightened the sense of the continent as a place of perpetual exoticness coupled with a sobering dose of strife and suffering.

The Africa of the popular Western imagination, then, has been well documented, even as we continue to be ignorant of the larger historical and geopolitical forces at play in shaping conditions there. In spite of the tragic and explicit images of disaster, war, and carnage that find their way into the media, we remain ignorant of just what we are witnessing. Here photographs seem woefully inadequate to the task of making sense of the broad and tragic sweep of it all. The war between the East African nations of Eritrea and Ethiopia is one such African tragedy, and it is the subject of the photographs of Admas Habteslasie. Briefly, the facts of the conflict are this: From 1961 to 1991 Eritrea, a province, was engaged in a war of independence against Ethiopia, with a referendum declared in 1993 that led to a peaceful separation and the establishment of the Eritrean state. War erupted again in 1998 when Eritrean soldiers entered the disputed Badme region, which was under Ethiopian control, leading Ethiopia to wage war against Eritrea for the next two years. Since 2000 an uneasy peace has been maintained, with still intermittent violence, and the toll—in addition to at least tens of thousands of dead and displaced—has been a country left in virtual limbo, with young Eritreans and Ethiopians leaving their home countries in large numbers and becoming part of a scattered international diasporic community. Left behind are displaced refugees living still in semi-permanent refugee camps.

What is a photographer to make of this history, let alone a photographer with deep familial connection to this history? Originally from Eritrea, Habteslasie’s parents fled the country, relocating to Kuwait. He and his family then left Kuwait at the outset of the Gulf War. Living now in London, Habteslasie returned to his familial home, camera in tow, to observe what he could of that fractured place. For all of the historical turmoil embedded in its history, Habteslasie’s photographs describe a place of odd tranquility or stasis. The air wraps uneasily around these largely uninhabited spaces. The scenes appear not so much as unpopulated spaces, but places that have become depopulated. Here a sleeping man appears in a long arched corridor as the lone figure in a once grand space. And there another lone figure, face unseen, places a call from a public telephone . . . speaking with whom? Indeed, who is there left to converse with? Certainly not the man sitting on the crumbling wall of the collapsing telecommunications building. Even the refugee camp seems eerily silent, absent of the evidence of mass displacement that one would expect. And the people walking along the road appear to hover between two places of inactivity, their presence given an uneasy counterpoint by the presence of the AIDS sign. Does anyone even notice this sign? Is there anyone left to look at it? If Habteslasie’s evocative photographs are any evidence, there remains much that photographs cannot tell us, especially when the place we want to know is steeped in such a long and tortured history. In this case, the photographs can only powerfully hint at what he describes as a place where, “the present has been excavated; the nation waits: for the future to arrive, for the wounds of the
past to heal.”

Dawoud Bey is Distinguished College Artist and professor of photography at Columbia College Chicago. His photographs and curatorial projects have been exhibited in venues throughout the United States and abroad. He was an Artist-in-Residence at Light Work in 1985.