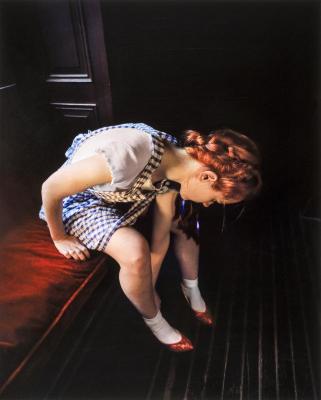 Blake Fitch spent her Light Work residency creating a museum-ready portfolio of her ongoing project, Expectation of Adolescence. Her residency allowed her the focused opportunity to print, edit and prepare this project for exhibition. Her series, now in its tenth year, focuses on her youngest sister Katie and their cousin Julia, documenting their journey into adulthood as it reveals the formation of physical and emotional identities in the context of societal expectations. Blake Fitch is a fine art and documentary photographer. She has photographed extensively in the US and Central and South America and has been exhibited internationally. Her work is held in the collections of several museums, including the Museum of Fine Arts, Houston. She currently serves as the Executive Director of the Griffin Museum of Photography in Winchester, MA.

Photographers have always photographed their families. From the earliest daguerreotypes of Albert Sands Southworth and Josiah Johnson Hawes, to the most recent annual offering of Nicholas Nixon’s Brown sisters, portraits of an artist’s close relatives have intrigued audiences with their implications of intimacy and their autobiographical overtones. For almost ten years Blake Fitch has been photographing two people, her half-sister Kate and their cousin Julia, who are the same age. The project began as the girls were just entering adolescence, and now, slowed but not fully stopped, the images are of young women.

While it can be said that all works of art are in some way autobiographical, this notion seems particularly clear when their subject is the artist’s family. Kate is thirteen years younger than Blake and is the product of their father’s second marriage. This younger sibling and her doppelganger cousin offer the image maker a chance to think about her own teenage years from the perspective of adulthood, and to manifest them visually and allegorically, from a safe distance. What, then, does a woman in her prime discover when she looks critically at the first years of womanhood in people she loves? There is a certain bittersweet undercurrent to these images but it is not their dominant quality. These portraits find great strength and power in their subjects. The girls are not blank slates or passive innocents—they are brave, present, active, and aware. They look us in the eye unflinchingly.

The early work in this series depicts Kate and Julia still protected by their childish unselfconsciousness. In ‘Girls in Bathroom’ they are beautiful in their shy disinclination to meet the photographer’s eyes, their faces resembling disembodied cherubim amongst the visual cacophony of ’70s wallpaper and hot pink blouses.

‘Kate in Red Towel’ adds a burgeoning power to the pre-pubescent vulnerability, capturing a girl with the startling presence of a sudden apparition, her red towel the only brightness in a neutral world of gray water and pale translucent skin. At first glance the towel appears to be clutched defensively around this changeling’s body, but time spent with this image reveals a posture of strength and knowingness that controls both the image and whether the towel will be wrapped more tightly or dropped entirely. Her stance and her quizzical expression challenge the viewer with calm self-assurance that simultaneously beckons and holds distant. I am reminded of Sally Mann’s ‘At Twelve,’ but also of Julia Margaret Cameron’s mountain nymphs and princesses.

The same unwavering gaze persists in a later image of the same girl, but its feeling has changed significantly. In ‘Katie in Orange Bikini Top,’ Fitch’s young sister is grown into a broad shouldered, full breasted woman who returns the camera’s gaze with equal measures of confidence, aggression, and caution. Her tanned body against the oddly timeless chintz peculiar to American summer houses is luminous in the half light, with a selfhood, presence, singularity, and solidity that bears little connection to her earlier ethereality. She is less ambiguous here, less a symbol than she is a genuine and particular individual.

Between these two extremes is an image of transition, that is, perhaps not surprisingly, more complicated than either of the portraits that mark the beginning and end of the series. ‘Katie with Emily in Yellow Hall’ blends wallpaper, print dresses, fragmented bodies, vulnerable bare feet, balustrades, and a glimpse of mysterious nocturnal outdoors in a composition that draws the viewers’ eyes to a pale face with challenging eyes above a clutched closed book. Still and isolated, this image becomes much more than an ephemeral moment captured, but it could symbolize any number of different things.

Within this series, as in the mercurial and passionate lives of teenage girls themselves, there are, to be sure, quick moments of high energy and downright silliness, but they are balanced by intensely private periods of introspection, represented by these still contemplative and almost defiant gazes that arrest and resonate. Fitch’s treatment of this complex subject succeeds because she does not attempt to decode the mysteries of adolescence. Rather she photographs them for her own reasons and her own observations, while opening them to ours.

Blake Fitch is the executive director of the Griffin Museum in Winchester, MA. She participated in Light Work's Artist-in-Residence program in December 2006. Her images may be viewed at http://www.blakefitchphotos.com/.

Alison Nordström is the curator of photographs at the George Eastman House International Museum of Photography and Film.