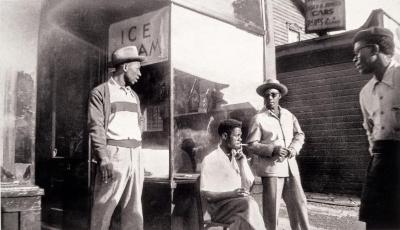 The Light Work Grants in Photography program, founded in 1973, is one of the longest-running photography fellowships in the United States. Each year Light Work awards three grants to photographers, critics, or photo-historians who reside within a 50-mile radius of Syracuse, NY. These awards support and encourage the creation of new work and scholarship in Central New York.

Recipients of the Light Work Grant in Photography are awarded $2,000 each to aid in the continuation of their research and work. In its thirty-five year history, the grant program has supported 110 artists, some multiple times. With the help of this regional grant, these artists continued long term projects, purchased equipment, framed photographs for exhibitions, promoted their work, collaborated with others, or otherwise continued their artistic goals.

Kathy Morris (Ithaca, NY) submitted work from her series Spinal Diary. Her work examines her experiences with back pain, back surgery, and the healing process, as well as the vulnerabilities of being one of the 47 million Americans without health insurance. Her autobiographical series exemplifies how artists translate and transcend the physical, emotional, and financial challenges of the health care crisis through creative expression.

Morris has exhibited her art nationwide. She has received numerous grants and awards, including a grant from the Cornell Council for the Arts, as well as nine artist residencies, among others. Her work is included in permanent collections nationwide including The Museum of Fine Arts, Houston and IBM Corporation in New York City. She previously received the Light Work Grant in 1986.

Paul Pearce (Mattydale, NY) uses photography to question the concept of civilized societies and to look at the conflict between morality and militarism. He is, in his own words, “fascinated by the packaging of ideas and beliefs.” Pearce’s work looks back at his time as a combat war veteran and to his reactions to the policies and actions of that time.

Pearce is an adjunct professor in photography at the State University of New York Oswego. His work has been exhibited nationwide including at the Everson Museum of Art in Syracuse, NY; Miriam Perlman Gallery in Chicago, IL; and State University Plaza Gallery in Albany, NY, among other venues. He also received theLight Work Grant in 1981.

Nancy Keefe Rhodes (Fayetteville, NY) received a 2008 Light Work Grant for a photo-historian project in which she prepared a selection of work by longtime local documentary photographer Marjory Wilkins for exhibition. Rhodes also wrote a companion essay for the exhibition catalogue on the importance of the images, how such vernacular photos have conventionally been treated, and the significance of careful restoration. Wilkins has photographed Syracuse’s African American community for more than 60 years, including the now-vanished neighborhood of the 15th Ward. Rhodes worked closely with Wilkins; photojournalist David Trotman-Wilkins; John Mannion, Light Work’s digital lab manager; and his summer 2008 interns on the digital restoration. She worked on this project with the aim of eventually publishing it as a book.

Rhodes is a freelance arts journalist and columnist covering film, photography, and visual arts. Her work has appeared on radio, in print, and online. She has written for such publications as Cineaste, Stylusmagazine, and the Syracuse City Eagle. She is an alumna of the first class of the Goldring Arts Journalism Masters Program at the S.I. Newhouse School of Public Communications at Syracuse University.

Light Work would like to congratulate all of the winners of the Thirty-fourth Annual Light Work Grants and extend a special thank you to our judges.

Dennis DeHart’s photographs and interdisciplinary projects are compelled by the connections, conflicts, and intersections of the natural and cultural worlds. His work has been shown in numerous galleries internationally, published in many books, and is held in both private and public permanent collections.

Argentinean photographer Cristina Fraire participated in Light Work’s Artist-in-Residence Program in 2008. Her images capture mountain shepherd communities that are isolated high in the Cordoba province—communities that do not have electricity, telephones, or roads and that depend on sheep as their single economic resource. Fraire’s work has been  in both solo and group exhibitions around the world.

John Clark Mayden participated in Light Work’s Artist-in-Residence Program in 2008. Mayden has worked in Baltimore’s law department for twenty-six years. His work depicts the wide range of experiences found in inner city life, from good times and joy to drugs, misery, social injustice, and crime. Mayden’s photographs have been exhibited nationwide and are featured in permanent collections at The Baltimore Museum of Art and Ohio Wesleyan University, among other institutions.