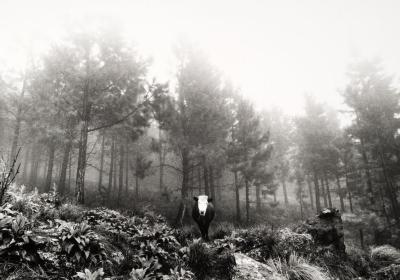 Cristina Fraire photographs isolated mountain shepherd communities in the highlands of Argentina’s Córdoba province. These communities exist without roads, electricity, or telephones, and the wool, skins, and meat of sheep are its only economic resources. In the barren and rocky terrain, the ancient connections between generations remained unchanged until urban ways were introduced by tourists and solar-powered televisions. Fraire’s pictures reflect this blending of the ancient and new, but also assert the distinctive features of the shepherds’ natural landscape.

Born in Buenos Aires in 1949, Cristina Fraire studied psychology at the Universidad de Buenos Aires and art at the Sociedad Argentina de Artistas Plásticos. In 1989, Fraire completed a study on health care in the suburbs of Buenos Aires for the organization Médecins du Monde [Doctors of the World]. Soon after, she began work on this series about the shepherd communities of Cerro Champaquí and Pampa de Achala, for which she was awarded a fellowship from the Fondo Nacional de las Artes. Fraire has had one-person exhibitions in Argentina and the U.S. She was also awarded a Guggenheim Fellowship in 1997.

In La vida austera (An Austere Life ) the inhabitants of Pampa de Achala, Argentina, are unlikely farmers. Their land is nothing but rocks that climb all the way up to a cloudy sky. Cristina Fraire’s photographs portray this foggy sky almost as a mirage, as the representation of something that simply does not seem real in space and time. These images could be of a past or a future time in a place where capitalism just passes by without leaving any trace. And yet the pictures allow the viewer to imagine the plights of each encounter on the land, the almost defeated hostility of the scenery, and finally, the interaction between photography and this community of shepherds.

Against all odds, there is also serenity and laughter here, happiness that stems from a circumstance in which the value of time is the only common and fundamental asset of the subjects. John Berger has noted how the farmer’s time is cyclical: It encloses the birth of the lamb, periodic shearing, and the eventual sacrifice of the animal for the community subsistence. This time emerges between the planting of the seed and the ripening of the fruit, which is eventually put on the scarce table to feed the farmer. It is a time that surges through the wedding, the birth of the first child, the child’s first day of school, up through the moment when the child is placed in the cemetery next to his ancestors for the eternal rest. A time that encloses the shepherd’s costume and the gaucho gear that so clearly mark a long tradition of life lived in repeating cycles.

Fraire follows this idea of a cyclical time by returning periodically to Pampa de Achala in order to document changes that are guided by the repetition of life. She goes back to photograph all that is new, all that has grown or diminished, and all that has changed. As part of that process, Fraire reconstructs images that she made in earlier trips, but within the current context. The images from the past provoke a conversation, an evocation, and a recognition, which the photographer documents in the present.

These photographs are both very intimate and anthropological. Fraire achieves this by employing a poetics of irony and anthropomorphism in which she utilizes the tools of imagination as if in an inventor’s lab. All the images—including that of the goats in which the lighting may make you visualize a public jury; that of a cow that seems to be wearing some strange Kabuki makeup; or the goat with its intestines exposed—have been manipulated by the artist in order to extract imagination and meaning, creating an optical illusion similar to the paintings of Giuseppe Arcimboldo in which all mirages seems like a reality.

Fraire underlines the inward quality of mimesis that exists in an isolated place in an attempt to show distinct objects as homogeneous. The sheep, the rock, and the shack are all shown as if their compilation represents a metaphor of the fusion that emerges between the mineral, the animal, and the human components of this austere life. Other photos, however, highlight interesting contrasts: people dressed up for national holidays juxtaposed to the dramatic nature in the background that seems an almost artificial montage. Sometimes she achieves what seems like a documentation of a past century, as in the photograph of the gauchos bringing down the national flag between piles of rocks.

An Austere Life is complemented by a series of oral testimonies, chronicles, and short texts from Fraire’s Journal at the Pampa de Achala. Although these texts are not needed in order to convey the narrative of Pampa de Achala, they do create a heterogeneous and complete experience for the viewer. They allow us to connect to the artist and through her to the people she hopes to make visible, those whom the artist owes the allowance of the entrance to their world.

Cristina Fraire lives and works in Argentina. She participated in Light Work’s Artist-in-Residence Program in April 2008.

Maria Moreno is a writer based in Buenos Aires, Argentina.