Karen Garrett de Luna
Kris with Quartz and Rose Quartz Crystals ("My belief is that we are all spirit or energy. Everything is vibration and intend"), from the series 'Articles of Faith', 2008 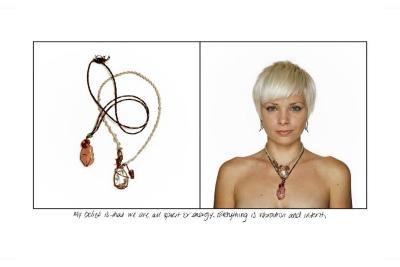 Karen Garrett de Luna will spend her time at Light Work preparing images for an upcoming exhibition of her ongoing series Articles of Faith. In this body of work, de Luna presents dual portraits of believers with the talismans and amulets that they normally wear hidden from view. These objects, worn close to the heart, represent a tangible connection to an intangible but powerful force of faith. Diaristic notations under the two-part images unify the portraits while deepening the viewer’s understanding of the subjects’ belief systems. Most often, these notations speak to the desire to remain protected and positive in life, rather than to specific religions. In focusing on these talismans as symbols of hope, de Luna creates a visible catalog of an invisible spiritual phenomenon. The exhibition will be held June 2009 in New York City in conjunction with En Foco.

Karen Garrett de Luna holds BAs in Dance and Mathematics from the University of Washington. Her work has been exhibited in multiple shows including A3, a group exhibition at Time-Life curated by Rebecca Karamehmedovic, and Los Muertos Pequeños at Broadway Market Gallery. She won En Foco’s New Works Award #12 in 2008.

The wearing of talismans, tokens, charms, and amulets is a practice thought to have originated in the Stone Age over 40,000 years ago. More than simple personal adornment, these special necklaces have been worn to evoke and intensify some of humanity’s most basic endeavors, including the desire to protect, to remember, to ward off the evil eye, or even to seduce. Hanging close to the heart, each is imbued with its own unique aura, and each works its particular magic next to the skin of the faithful.

Karen Garrett de Luna’s book and ongoing project, Articles of Faith, speaks to the relationship between these objects and the beliefs that transform them into a testimony of faith. In the series people from all walks of life, age, race, gender, and creed are photographed with the necklaces that adorn them every day. The ritual of wearing these articles of faith is a tie that binds the series together. It also serves as an external, visible symbol of internal, invisible convictions.

The project, in its use of the photograph as index, stands within the tradition of phenomenological photography. The concept that objects have a meaning specific to human experience and understanding begins with the advent of image making itself.  Remembrance and meaning are the foundations of the photographic experience. But de Luna takes this idea further by making Articles of Faith an exploration and construction of binaries and dualities.

De Luna creates a fascinating archive of both the spiritual and the material with a clinical eye. Her subjects are all photographed uniformly, which creates a consistent look for the project as a whole. Each person strikes the same straightforward pose, shoulders squared to the picture plane, against a white background, and each image is lit evenly and neatly. De Luna’s subjects are also all naked from the necklace up, eliminating any external variables besides the necklaces that could reference the subjects’ identities, beliefs, or positions in society. Placed next to every portrait is a still life of the subject’s necklace, also shot in a similarly scientific way.

The diptychs of worn/wearer create a contradictory relationship in which the almost surgical repetition of each subject’s portrait is juxtaposed to the artifact that marks that individual uniquely. The 65 diptychs that currently comprise the series combine the look and feel of a laboratory experiment with the diversity of humanity and its many beliefs. Photographing the necklaces alone and then with their wearers underscores the fact that it is the believers who choose to don the articles of faith who give them any human significance or power.

Accompanying each work is didactic text, written in the subject’s own hand. These are personal testaments to their faith and their relationship to the material manifestation of this faith. Without this text, the project would not have the emotional resonance that it does. The diaristic text grounds the project in a visceral and emotional way; the handwriting also prevents the work from having a too clean, rather commercial catalog look, keeping the project out of the purview of cold examination.

For example, within the blank, white framework of the images, we are invited to investigate the relationship between Kris and her quartz crystals. Kris, who possesses the delicate good looks of a model as she gazes confidently into the camera, erases any notion of her necklace as fashion statement when she writes that, “My belief is that we are all spirit or energy. Everything is vibration and intent.” Similarly, Bogdan, whose Russian-Orthodox cross is separated from his skin by a blanket of beautiful tattoos, grounds his article of faith in a scratchy statement that references everyday remembrance of his family and the realities of life. These statements make it clear that the message contained within the image garners strength from profession. In this way, de Luna’s project closes the gap between the material and the immaterial, the external and the internal.

The artist makes no claims for religion or spirituality. She presents these objects and the people who believe in them to the viewer for inspection and retrospection without judgment. By retaining a certain distance from the themes of her project, de Luna makes it possible for viewers to investigate the relationship between the material and the spiritual and to draw their own conclusions.

In her artist’s notes on the series, de Luna writes that life is fragile, and yet her archive of faith reminds us that within this fragility, there is strength. For while life may be fragile, this project shows that the ties that bind us to our faith are not. Regardless of the specific belief or function attributed to the necklace by the individual, wearing it has a common basis in the comfort that the bearer is not alone.

Karen Garrett de Luna is a graduate student of photography at Emily Carr University of Art and Design in Vancouver, BC, Canada. She was an Artist-in-Residence at Light Work in April 2009. Her website is www.delunatic.net.

Song Chong is currently working on her dissertation project on North Korean photographic archives at New York University, in the Department of Media, Culture and Communication, where she is an adjunct professor. She also works at Magnum Photos as education manager.