Martin Weber
That there be work; that the country heals itself; that people don't die from war, nor from hunger. Esteli, Nicaragua, 2003 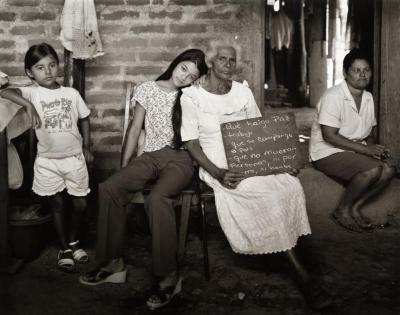 For a more recent CV or bio please visit the artist's website, http://www.webermartin.com/

Martin Weber in an Argentinean photographer who divides his time between Buenos Aires and New York, NY. He studied at the University of Buenos Aires, and the International Center of Photography, New York in 1992. Weber has won numerous grants and awards, including in 2008 the Silver Eye Award, and in 2005 a grant from the No Strings Foundation. He received The Prince Claus Grant (2004), two grants from the Hasselblad Foundation (2001 and 1999) and a Guggenheim Fellowship (1998). He has also been an artist-in-residence at The Center of Photography at Woodstock (2004), Lightwork, Syracuse, New York (2002) and IASPIS, Sweden (1998).

He participated in Light Work’s Artist-in-Residence program from April 15 to May 15, 2002.

Martin Weber is building a map of all of Latin America, a land rooted in a web of overlapping histories as any other fixed geography, language, or culture. One may say that this map is based on desire. But perhaps desire is the wrong word. These photos are black-and-white stagings of people’s wants, wishes, longings, aspirations, and sometimes needs, as well as desire. He calls this growing collection of images his Latin American Series of Dreams, and so far, he has trekked through communities in California, Mexico, Cuba, Nicaragua, Argentina, Peru, and along the borders of Bolivia and Uruguay to build this map.

Response to the images in this series is a kind of spellbound discomfiture. The pictures are beautifully constructed, centered on individuals alone, or in groups whose poses simultaneously suggest both extraordinary candor and deliberate theatricality. Although the middle classes are represented here, some of the images portray real poverty. As a viewer from the affluent North, I am struck by the simplicity of so many of these people’s dreams, and by the magnitude and sense of urgency these images transmit. They are messages sent from a tormented region of the world where the contradictions of social class are much stronger than in the North, and where during their endless series of dictatorships, uncertainty, fear of speaking, and silence have been normalized.

Weber, who was raised in Buenos Aires, has developed his practice in conversation with the documentary tradition, which has often claimed to present an “objective truth.” His pictures, however, are not as straightforward. Early studies in film, theater, and acting have strongly influenced his still photography. He is as interested in the process of making a photograph as much as the result, making reference to the early days of photographic history when sitting for a portrait required stillness and time, making it an event in itself.

Thus, when he began to build this series in 1991, his first intention was to create, through portraiture, the circumstances for a kind of collaboration with his subjects— family, friends, and strangers. He wanted to go beyond the traditional role of the photographer who directs from behind the lens, so he learned to compose and take pictures while standing at a distance from the camera, and to work together with his subjects to compose the shots. Through this he succeeded in making his subjects feel more comfortable, giving the images a remarkable, candid intensity.

Weber believes that being asked to reflect on what one wants or needs is especially important in Latin America. “It's a kind of metaphor in some ways,” he says, “In Latin America we have had to rebuild our societies every ten years. We have so much outside interference in our countries, we have not had a chance to self-determine.” He asks his subjects, “If you could be or have anything in the world, what would that be? What do you hope for?” and has them write out their responses on small chalkboards. Weber states that this process of writing out their own “captions” is a chance for these individuals to re-evaluate their situations, and to give small, but concrete form to their dreams at a particular time and place. “Our destiny may only be changed if we allow ourselves to imagine a destiny different from that which we were given,” he writes.

In the North, we have been trained to recognize beauty in poverty, being able to view it from a distance. Perhaps we believe the simplicities of poverty are expressive of a greater truth than wealth. There is this appeal to Weber’s photographs —they are picturesque and hold a certain authenticity.

In his essay, “In Defense of the Word,” the Uruguayan writer Eduardo Galeano explains the way that “mass culture has manipulated consciousness, concealed reality, and stifled the creative imagination in Latin America.” Weber’s photos defy mass culture, bringing forward, instead, pictures of diverse individuals who have decided to assert for the public, “This is who I am.” It is a small act, perhaps, but a liberating one nonetheless, and crucial. More importantly, it is a generous act. It gives us the opportunity, as viewers from far away, to engage with the dreams revealed rather than simply consume them. By revealing themselves, they help us to become aware of who we are.

Jen Budney is a writer and curator living in Ottawa, Canada. For the past two years she has been working as the artistic director of Gallery 101, an artist-run center.