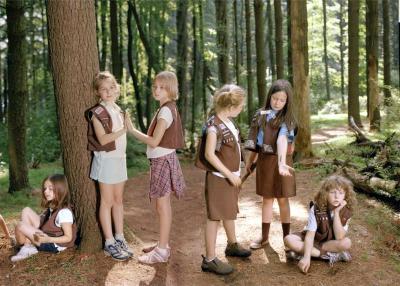 Rachelle Mozman’s series of digitally-constructed portraits, entitled Costa del Este and American Exurbia, examine the surreal and oddly beautiful quality of childhood within the gated communities of Central America and the United States. Her images raise questions about the glamour and the price of privilege in these environments that strive to create security in isolation. Mozman plans to edit and print for a large-format portfolio of digital prints during her residency. She will also be outside shooting new images for another series in which she photographs Girl Scout troops and their own unique culture.

Rachelle received an MFA from Tyler School of Art. She has exhibited extensively in America and Panama, both in solo and group shows.

I grew up on Manhattan’s Upper West Side to Jewish parents in an elevator building with doormen who shook hands and high-fived. Although the neighborhood was considered safe, stores stuck “safe haven” stickers in their windows. If we ever felt any danger or threat to our livelihood, we could escape to them, call our parents, and be on with our protected, comfortable lives. These gestures gave my family, friends, and me a sense of community and security.

As a young child, I remember my older sister’s friends frequently raiding the refrigerator for pints of ice cream and rectangular toaster oven pizzas, one of these friends being a teenaged Rachelle Mozman. Decades later I stumbled upon an exhibition of her work in a gallery on Atlantic Avenue in Brooklyn. I was struck by a particular image of a young girl standing awkwardly beside a digitally manipulated one-eyed cat. Seeing this photograph, one would not imagine a pillager of Jewish freezers on the Upper West Side. Mozman’s series American Exurbia and Costa del Este offer a different image of communal security where the term “safe haven” reflects a homogenous world that is closed off and isolated from its surroundings.

In both series, Mozman makes highly stylized, heavily directed portraits of children living within exurban and gated communities in New Jersey and Panama. While the communities Mozman photographs exist in separate geographical regions, they are strikingly similar in their social, racial, and economic homogeneity. Often these communities are inserted into recently deforested landscapes, essentially ensuring their own removal from the outside world. Mozman successfully documents and manipulates this alternate and controlled sense of security that diverges from that childhood on the Upper West Side. In order to illustrate these complexities, she uses a variety of photographic and art historical traditions ranging from the staged narratives of Gregory Crewdson and Jeff Wall to the documentary traditions of August Sander and Diane Arbus, the investigative portraiture of Rineke Dijkstra, and even some influence from sixteenth-century portrait painters like Agnolo Bronzino.

The children in Mozman’s images grow up fast, lack commonly held signifiers of youthful emotion, and in the case of Costa del Este, made in Panama, spend the majority of their time inside air conditioned homes to avoid the excruciatingly hot temperatures outside. In one photograph, Natalia on the Stairs, a young girl in a red dress sits awkwardly on a clean, curved staircase, her hands pressed flat against its third step, trying to balance as if the stairs might collapse or even disintegrate below her. Like the staircase, both her outfit and her complexion are immaculate, and her gaze is removed. She appears deep in thought or in a complex inner monologue, yet the viewer has little information suggesting what that might be. In another photograph, Twins in Yellow, two girls in identical yellow dresses sit on a similarly identical curved staircase confronting the viewer with unsympathetic, hardened gazes. While their legs are crossed with a bit of awkward twee, their eyes stare through the viewer as an outsider and show the girls as threatened and questioning.

Even in the images that contain more common symbols of childhood, there is a maintained sense of distance in the subjects. In Boy With Dog, a pre-teen boy stands in a doorway holding his pet Chihuahua. Though one might expect a tender bond between the boy and his dog, the dog actually stands stiff on the boy’s arms, which serve more as shelving rather than an emotional cradle.

Digital manipulation plays a large conceptual role in the majority of these photographs, rendering skin tones near pastel and emphasizing the subjects’ sense of complete disconnection from their environments as they, much like their houses, are literally dropped into their surroundings. The contriving of narratives, layering of multiple negatives, and literal construction of these images directly parallels the fabrication of the planned communities that Mozman photographs.

Despite Mozman’s heightened sense of control over the end product, her subjects are communities and children who actually exist in the world. Although Mozman’s work has some dialogue with staged narrative, her subjects are real people and real communities, no matter how far removed. To emphasize this point, almost every photograph from this series is anchored by a window or door. Their presence underscores the gatedness of these communities and the isolation of the children from the outside world.

Mozman’s work investigates notions of communal security that diverge from the wholesome idealization many Americans imagine. In dialogue with portraiture, documentary, and staged narrative photography, she depicts communities where a certain economic and cultural milieu ultimately sacrifices one idealization of security for a closed off illusion of protection.

Rachelle Mozman lives and works in New York City and Panama. She was a Light Work Artist-in-Residence in May 2009. Visit her website at www.rachellemozman.com.