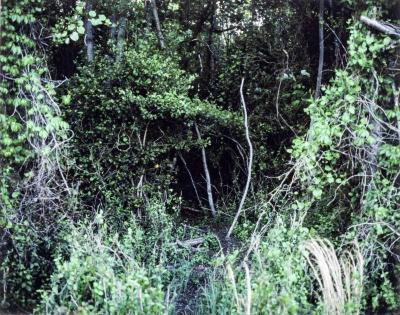 Chad States turned to Craig’s List and other online forums to find subjects for his series about masculinity. His images indicate that cultural differences, societal expectations, and personal histories produce myriad complex answers to the question, “Are you masculine?” Photographing his subjects in their homes and other domestic spaces, each image weaves together environmental portraiture with psychological topography. During his time at Light Work, States plans to turn his attention to shooting, editing, and printing images from another body of work, entitled Cruising, that investigates the performance of sexuality in the landscape of public cruising spots.

Artist Chad States documents public cruising sites—outdoor areas where men congregate for anonymous sex. Without prior knowledge, most of these landscapes appear to be rather innocuous. In fact, when one sees the whole project, most of the images in the series function almost completely as straightforward landscapes. The lush, Edenic terrain in Jean-Antoine Watteau’s rococo paintings comes to mind when looking at these photographs, as do the luxuriant trees and vegetation in Jean-Honoré Fragonard’s later canvases, whose work, like States’, only partially veils licentiousness and blatant eroticism.

In the absence of obvious clues, the true use of these sites is invisible to the naked eye—and certainly to the general public. This, of course, is by design. The cruising spots, which are often in public parks or wooded areas to the side of parking lots, for example, do not appear out of the ordinary unless one knows what evidence is there to be revealed. It is this irony that first interested States. And it is this tension between invisibility and visibility that makes the subject a particularly rich one for the camera.

Photography, as a medium, is inherently voyeuristic. Photographs titillate our compulsive curiosity to see what is labeled as secret or private or “perverse.” These images expertly exploit that obsession by playing with how much of the actual cruising is revealed to the camera and how much remains hidden. States’ photographs continuously reference the intersection and interweaving of vision and sexuality in which it is the physical act of looking that arouses.

While the earliest images in the series were entirely unpopulated, as the project progressed and evolved, States began to incorporate scenes that include obstructed glimpses of figures through the foliage. At this point in the series, States struggled with the morality of compromising the privacy of his subjects. Eventually, he devised a way to give peeks of action without actually revealing the identity of any of the participants. While serving a practical purpose, the technique also heightens the voyeuristic tenor of the photographs. In viewing States’ prints, one catches a peep of the sexual activity while remaining invisible oneself. In all of the photographs there is a palpable tension, a moment of pause when one must decide whether to go further into the woods or turn back.

States goes further into the woods. By being physically present at these sites, he embarks on an adventure, indeed the same adventure taken up by the men who seek physical pleasure. It is this part of the artistic process—the mystery, the risk, and the related exhilaration—that plays into the psychology of the sexuality of cruising. The excitement of the uncertainty and peril (however real) are half the gratification and feed the sexual urge. Indeed, cruising is easily equated with man’s primeval urge to hunt, incorporating the outdoors, the thrill of the chase, and the element of danger, which are all related to primordial masculine urges. States’ photographs manage to mine those feelings and emotions and compulsions, sometimes with the simple depiction of a dark and empty path.

To find these cruising spots, States turned to the internet. He found that the online cruising websites provide tips for finding the action and for how to better one’s odds for success (i.e., “Tap your brake lights to signal to other cars”). States jotted down the words on scraps of paper, and when he came across them later, they read as poetry. He incorporates these snippets of directions or phrases into the series by printing them in a very pale, subtle, gray type on white backgrounds. Practically white text on white paper is hard to read with a quick eye, and at first all one sees in these pieces is a blank sheet. Once one’s eyes adjust, the text begins to emerge, and with some effort the subliminal passages then can be read.

The textual pieces, like the cruising sites themselves, are nearly invisible. The words here do not merely serve as captions for the pictures. Instead they play alongside the images, adding another layer to States’ process and the ritual followed by the men seeking sex. The words are part of the hunt; and part of the hunt is deciphering the text. These rules of engagement and codes of culture not only instruct men on how to behave, they function in tandem like a complicated game in which one goes out with a map in search of adventure and hopeful treasure.

Chad States lives and works in Rehoboth Beach, DE. He was an Artist-in-Residence at Light Work in June 2009. View more of his work online at www.chadstates.com.

Brian Paul Clamp has nearly twenty years of experience in the fine art world. He is the director and owner of ClampArt, a gallery that specializes in modern and contemporary art with an emphasis on photography. Clamp holds an MA in Critical Studies in Modern Art from Columbia University and is the author of numerous publications on American art to date.