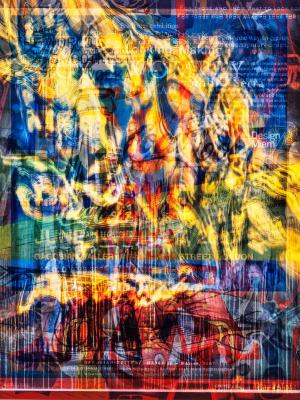 Kessmann’s exhibitions have been reviewed in a variety of publications, including Art Papers, The Huffington Post, The Washington Post, The Boston Globe, St. Louis Post-Dispatch, Pittsburgh Tribune-Review, and ARTFORUMmagazine.  Work from his project, Art as Paper as Potentialwas reproduced in Contact Sheet, along with an essay by Tim Wride.  A catalogue was produced for his exhibition, Architectural Intersections, at Conner Contemporary Art, which includes an essay by Karen Irvine.  An exhibition catalogue was produced in conjunction with his exhibition, Plastic on Paper, at White Flag Projects; Kristen Hileman wrote the essay for this publication.

Kessmann is an Associate Professor of Photography at George Washington University, where he teaches at the undergraduate and graduate levels.

Millions of times daily across the country we are asked the seemingly benign query, “Paper or plastic?” This quintessential rhetorical trap has no right answer. Our selection identifies us as either part of the callous consumptive class that condemns old-growth forests, or those who facilitate the digestive demise of marine mammals. After our long descent into the darkest corners of a landfill mentality, we, as a society, are ethically immobilized by a relatively simple material decision. When taken to its most extreme conclusion, however, this dilemma bears lasting implications to that class of problem solvers upon whom we rely to provide some sort of ethical and intellectual guidance. The dilemma: What are the ethical parameters of the things we consume? The problem solvers: artists, especially those whose practice culminates in the making of objects.

Mail is electronic, headline news is retrieved online, and the Kindle has become the alternative of choice to hard- versus soft-cover. The exquisite hairline sting of a paper cut has all but vanished as an experiential reference. Yet, at a time when offices are going paperless and irony is supposed to have been banished from the art-makers’ arsenal, Dean Kessmann’s paean to the blank sheet of paper—the physicality that defines it and the potential it represents—is a body of work that cannot be completely accessed without a clear nod to its wit and subversion. How appropriate that we should be given a body of work that clarifies the nature of material objects by an artist whose previous ruminations have fetishized the logo’d plastic bag.

Kessmann’s Art as Paper as Potential: Giving/Receiving consists of three discreet, though interdependent pieces. He beatifies the sheet of paper as both object and concept without falling prey to a post-modern sense of angst. He debunks the easy characterization of the pulp substrate as a neutral creative space and celebrates its duality as both simple surface and complex object. The artist is almost reverential in his investigation of its physicality, scientific in his mapping of its aesthetic, and playfully insidious in his revelation of its conceptual implications.

Intersecting Data: Light/Dark; Reversing Negatives: Inside/Outside; and Shifting Dimensions: Begin/End share a reliance on an intricate weave of physical subjects (sheets of paper), digital processes (scanning and manipulation), and analog output. The character of each piece relies on how the artist deploys each of these components and the ratio of each element to the whole. The three pieces are, to extend the artist’s own metaphor, the recto/verso/recto of his investigation, or more wryly put, the three sides of the same sheet.

Kessmann lets these conceptual parameters fold in upon themselves. Reversing Negatives: Inside/Outside allows the scanning process to render each paper sheet as an infinitely reproducible pattern that moves it beyond its identity as a neutral substrate. Each scan’s reversed tonality references the artist’s positive/negative photographic heritage while celebrating each sheet’s individuality not as an object but as a surface. Intersecting Data: Light/Dark takes this strategy one step further as Kessmann dissolves the physicality of his sheets of paper. His scans are digitally de-materialized and arranged across a broken field. The result is a ghosted mass of rectangular separations, overlaps and intersections that define new planes of activity  manifested through light—again a nod to the essential character of photography.

Shifting Dimensions: Begin/End concludes Kessmann’s meditation on the nature of object-making. In this video only the digital record of process (and an incomplete record, at that) remains. A stack of paper is imperceptibly reduced sheet by sheet as it is put into motion on an unseen turntable until only a single sheet remains. The activity, though not the turntable itself, is reversed until all sheets are replaced and the process begins again. The video refutes both the stack and its component sheets as objects in a way that is both conceptually numbing and visually unfulfilling, which is, of course, Kessmann’s point.

With Art as Paper as Potential, Kessmann nods to the Conceptual and Minimalist art makers who have preceded him. He acknowledges his place as a part of their continuum as well as his place within the trajectory of photographic practice. By doing so, he frees himself from the restrictions that any one of them could have placed upon him. From this perspective Kessmann gives voice to the existential question that every artist who makes objects must, at one time or another, ask: Is the object still relevant? With a keen sense of conceptual sophistication, an acute understanding of the value of visual punning, and the maturity of an artist who knows that such questions even exist, Kessmann affirms both the activity and the product of object making and slyly answers the original “Paper or plastic?” query with a satisfied, “certainly.”

Dean Kessmann is an associate professor of photography at The George Washington University in Washington, DC. He was a Light Work Artist-in-Residence in July 2009. Visit his website at www.deankessmann.com.

Tim B. Wride is the executive director of the No Strings Foundation that provides individual artist grants to US photographers. His website is www.curatorialeye.com