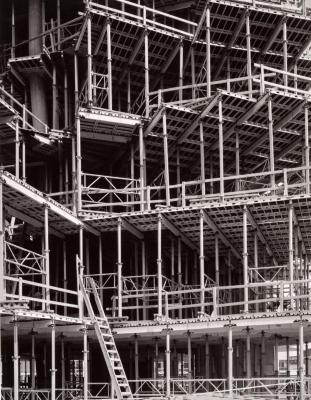 I look at photographs for the information they contain. I know that their record is not necessarily a mandate for truth, but I want them to tell me what they can beyond the act of the creation of the image and the production of the resulting prints. It's an old fashioned way of looking, for what has happened in the visual arts generally has also happened specifically in photography, style and attitude have supplanted the photographers' first call to record and document the world before them.

Stanley Greenberg's photos are innocent of such direct propaganda, but they are not innocent of purpose or specific intent. Instead of pondering the photo as the field for the artist's personal and highly individual struggle for visual form and content, one rather penetrates Greenberg's images into a wider circle of thought, one which touches on the history of useful form and technological function. The question then is not only about the artist's intent, but also about the intent of these monumental assemblies, the workers who have built these things, and the caretakers who are responsible for them.

Greenberg has, in fact, chosen a subject that is freighted with a most important message. It is one which goes straight to the heart of our urban existence -- the condition and state of our utilities, which we too often take for granted because they usually work so well. He has concentrated on New York City's water supply, a complex of dams and tunnels so all encompassing that its reservoirs have dramatically changed the topography of thoUnited Statesnds of square miles in an endeavor to ensure an unfailing supply of water to the city.

As John Szarkowski said of Eugene Atget, Stanley Greenberg is a pointer, selecting small parts of this system to photograph, and in so doing making its magnificence and scale all the more palpable. The image of the Spillway, Pepacton Reservoir at first suggests elegant Mayan stonework, rather feminine in its compound curves traced with the thin lines of beautiful, tight fitting stonework. There is age in this grand wall, but it is of decades, not centuries. It is a backward glance at a construction technology and form that, while less than 50 years old, will most probably never be replicated.

This is a grand vista and the only public image here. It is mindful of the sort of achievements the nineteenth-century was happy to produce -- and to have you see. The modern age, however, is reflected in the almost infinite axial perspective of the damp concrete-formed rectilinearity of the maintenance tracks beneath the great valves of Water Tunnel Number Three. This construction is out of sight, hundreds of feet below ground, the way engineers and planners want it, harder for terrorists to reach and easier for the public to take for granted. The vistas of the tunnels under construction are almost photographs of 'nothing,' until one remembers that in a few years they will be filled with water under hundreds of pounds of pressure rushing along through their now vacant length. Humankind has built these things, shaped stones to hold and direct the flow of water, cut the tunnels from the living rock, lined them with concrete, and controlled their flow with valves as big as locomotives. Then, in Stanley Greenberg's photographs, their creators have stepped away, leaving us to marvel at the result -- while at the same time pondering on the state of our lives without these constructions -- and on the endeavor of those who conceived and built them, and now maintain them.
Thomas H. Garver (c) 1997

*Stanley Greenberg lives in Brooklyn. He is the author of Invisible New York, The Hidden Infrastructure of the City (1998). His photographs are in the collections of several museums, including the Metropolitan Museum of Art and the Whitney Museum of American Art.

'I've been photographing New York City's water system since 1992. One of the largest water systems in the world, it is almost entirely gravity fed and upholds some of the highest quality standards anywhere. The vast system is comprised of upstate reservoirs, aqueducts, distribution tunnels, gatehouses, valve chambers, and water mains. The city's first aqueduct, now called the Old Croton, was completed in 1842. Since then, the city has constructed nearly twenty reservoirs, three additional aqueducts from upstate New York, and two distribution tunnels underneath the city. In 1970, work began on a third tunnel, which will not be completed until 2020. In the early days, men using explosives, hand tools, and horses did the earliest construction work on these tunnels. Now, a tunnel-boring machine performs much of the labor. Either way, the work is difficult and dangerous. It was not until last year that I was given access to all of the restricted spaces that I have wanted to see. Many of these places have been photographed only once, when the system was built; others have never been photographed at all.'