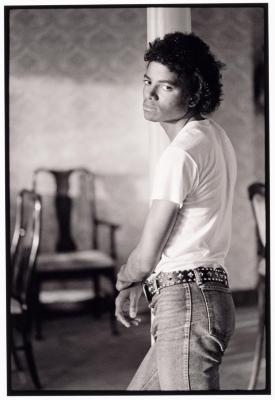 Todd Gray spends his time between Ghana and Los Angeles. He attended the California Institute of the Arts in the late 1970s and became the young Michael Jackson’s official photographer from 1979-1984. In the late 1980s, Gray received his MFA from Cal Arts and turned from his commercial experience to a conceptually rigorous body of work. He has exhibited widely, at venues including the Brooklyn Museum of Art, the Los Angeles County Museum of Art, and the Smithsonian Anacostia Museum and Center for African American History and Culture. He is currently a Professor of Photography and Digital Imaging at Cal State Long Beach.

In his photographic and performance work, Todd Gray investigates the relationship between the photographic image and human consciousness. By making visible the tensions between presence and representation, between the attendance required for the production of a photograph and its afterlife as a visual object, Gray questions the ways in which photography influences, and is influenced by, our contemporary ways of thinking.
The contradiction between presence and the preservation of history and memory, whether in writing or in photographs, has been a major preoccupation of twentieth-century thinkers. Working with several permutations of photographic practice—straight photography, travel and documentary photography, the photograph as material in a work of collage or assemblage, and finally the photographic image as an element within a complex performance-based event—Gray’s oeuvre consistently unsettles the conventions of photography.

Gray’s early works were a politically charged intervention into urban public space. To coincide with the 1984 Olympic games, he hung poster-sized collages of black boxers fighting with buildings throughout Los Angeles. Coming from a background in conceptual art, his Untitled series from the mid-1990s—mural-size silhouettes of cartoon characters making aggressive gestures and striking sexualized poses—was a comparative analysis of cultural stereotypes. Shifting to life-size sculptural work, California Missions of 2004 balanced large-scale photographs mounted on mirrors with taxidermied animals such as a bison, a swine, and a horse. The animal and the image both manifest a form of preservation. Brought together, they evidence the history of colonization in America. The series Shaman from 2003 was based on a sequence of private performances that took place first in Los Angeles between 2003 and 2005, and since 2006 in Ghana, where Gray now lives part of the year. Gray used shaving foam to sculpt his internal experience onto the surface of his body, documenting the event for the sake of future viewing. Sculpting an image out of and onto his own body, Gray attempted to make visible what cannot be represented. Be it a state of trance or other alternate states of being, the performances documented by photography have transformed a state of consciousness into an image. The complexity of the Shaman series gained an additional perspective when it returned as an element in a multi-media event, Sonic Love Wave, performed in Syracuse in 2007.

Sonic Love Wave featured two screens that projected images in sync with Gray’s African drum. An algorithm-based software signaled a computer with images creating a dynamic, ever-changing interaction between the performer and the photographs. Gray’s cadence, pitches, and tones determined the pace and the variety of image changes. The result was a mesmerizing overflow of photographs and beats that would remain fresh for the thirty-minute duration of the performance.

Warming up in the space between the audience and the stage, a blindfolded Gray was then led onstage by an assistant while chanting the phrases “I’m sorry,” “I love you,” “Thank you,” and “Forgive me” alternately and then sporadically throughout the performance. Onstage, with the sound of his deep breath, the left image was turned on—a picture of a corrugated metal wall onto which a photograph had been taped. With the beating of the drum, a Djembe, both projectors began to emit rhythmic sequences of photographs that Gray had compiled. The photographs were from his travels in Europe, Africa, and from the village near his part-time home in Africa—landscapes, urban-scapes, architecture, portraits, group portraits, street and country scenes, and multiple works from the Shaman performances. The images moved at a speed slow enough to allow for comprehension, but too fast for an interpretive read. Formally, the juxtapositions were jarring, and the contrast between the natural and the artificial stood out in particular. Yet, there was no time to dwell on comparisons or interpretations, as the energy of the performance swept the mind away from its habit of organizing visual materials into preconceived categories.

The compulsion to draw comparisons, so inherent to our culture of viewing, was thwarted by the presence of the artist, as his drumming both propelled the images and generated a meditative attention to its sounds. Once removed from the original moment of their creation, the time, the place, and cultural context of the event, the photographs rely on interpretation to create knowledge. By orchestrating new conditions for the viewing of images, ones that include the presence of the artist, Gray questions the conventions that underlie the ways we create knowledge from photographs.

Todd Gray spends his time between Ghana, Africa, and Los Angeles, CA. He is currently a Professor of Photography and Digital Imaging at Cal State Long Beach. He participated in Light Work’s Artist-in-Residence program in July 2007. His work can be viewed on his website at http://toddgray.uber.com/.

Artist Todd Gray began his recent body of work, A Place That Looks Like Home, by collecting frames at yard sales and second-hand stores on the south side of LA, a neighborhood that is primarily African American and Latino. Worn and scratched with a patina of age, the discarded, vintage frames seemed to Gray already embedded with stories and history. For an African-American artist and activist who investigates and examines blackness,  the empty frames were an invitation to create a new narrative that explores the complexity, pain, and also the hope of the African diaspora and his place in it.

Looking back over a body of work that includes over forty years of photography, performance, sculpture and image making, Gray began to fill the frames with his photographs and fragments of images from his archives. For Gray, the process of collage becomes a call-and-response technique, involving a dialogue with materials and a constant shifting and moving of parts until they coalesce, both visually and conceptually, into a whole. Each composition in the series
is masterful. Sometimes images recur, but a deeper story emerges from the new context and fresh juxtaposition about a black protagonist whom the artist discovered is himself.

Todd Gray divides his time between Inglewood, California, and Ghana in West Africa. He worked for many years documenting the music scene in Los Angeles, and spent a period as the official photographer for Michael Jackson. His photographs of Jackson, published as Before He Was King (2009), depict Jackson at the height of his creative power in rare moments of intimacy and trust. Although their lives would drift apart, from 1979 to 1984 these two young black men shared what Gray describes as a wild ride. Looking at this archive through the lens of race, class, and gender is a process Gray began some years ago. Inspired by the work of cultural theorist Stuart Hall, he began to understand his own identity as polymorphous. Like Hall, he sees race as a constantly changing construct of time and history. Gray’s collages include images of Jackson and other icons of the music industry, documentary photographs of Ghana, gang members from South LA,  and images from the Hubble telescope. Gray describes his layering of images and frames as a collision. “The stacking of photos makes subjectivity slippery, the complexity is what I’m after.”

In the piece Atlanta by Boat, 2015, Todd Gray works with a black-and-white portrait of young Michael Jackson from the 1980s.  The image depicts Jackson elegantly and casually seated in a hotel room before a damask covered wall, his lithesome, athletic body beautifully bathed in raking light. But Gray has chosen to fully cover Jackson’s face with an oval frame holding a haunting image of a black man dressed in white, paddling a canoe toward a tropical, palm-covered shoreline. The figure has his back to the camera, adding another layer of obscurity, or perhaps pointing to a larger global perspective. According to Gray, “Not looking at MJ as an individual, but as a surrogate of myself, mirrors my own position as a colonized person. I examine my own blackness through the icon of Michael Jackson, the most recognized black body on the planet.” For the viewer, aware of the tragic trajectory of Michael’s life and his profound gifts, the image has an almost ominous quality. Only the image of the man in the canoe relieves our grief. This hints at the survival and perseverance of a fragmented culture, and crossing the water suggests the spiritual notion of the after-life.

Gray intersperses photographs of the solar system throughout this series. His dynamic compositions of layered circles often echo the whirling movement of planets and stars in space and provide a more expansive, macroscopic view of life. As we mount this exhibition at Light Work in the summer of 2016, the country is roiling under the pressure of extreme racial tension, violence, and fear.  We have watched the gruesome murders and violent aggressions toward black men and woman documented on cell phones and circulated on social media. Terrifying social and civic unrest, murdered police, and the overt racial rhetoric of the political season are stirring up and revealing anew the dark, intractable history of racism in America.  As the demographics of the country shift, and the pre-eminence of the white race declines, the underpinnings of privilege and power are shifting too. The tension and power in Gray’s work lies in its awareness of both this darkness and a more transcendent view of humanity.