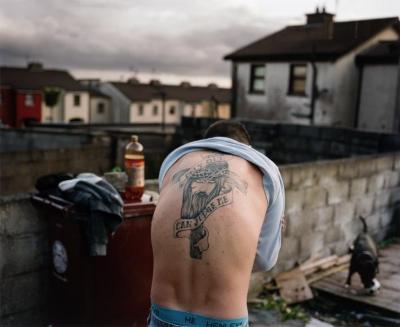 The Light Work Grant is one of the oldest photography fellowship awards in the United States. Every spring Light Work awards three grants of $1000 to photographers, critics, and photo-historians residing within a fifty mile radius of Syracuse. The twenty-sixth Annual Light Work Grants were awarded in the spring of 2000 to three photographers:

Doug DuBois (Syracuse) was awarded a grant for his three series of large-scale prints, Winners, Motorini, and Motorsai. Winners is a series of posed portraits of successful players in games of chance and skill from the midway at the New York State Fair. In a publication that accompanied the recent exhibition of DuBois’s work at the Everson Museum of Art in Syracuse, Thomas Piché, Jr., senior curator of the Museum, connects this series to the work of August Sander, relating it to Sander’s Man of the Twentieth Century. Piché wrote, “Like Sander’s subjects, Winners can be read for specific information about these people at this fair.”

Motorini, a collection of images of motor scooter riders in Florence, was photographed in July 1999. DuBois notes, “Florence has the highest number of Vespa-type motor scooters in Europe. The streets are narrow and the motorini can navigate the traffic with great ease but more importantly with the intimacy of a high-speed stroll. This spectacle of motorized flaneurs was photographed somewhat discreetly from the pedestrian sidewalk.”

DuBois approached the motorsai of Bangkok in a completely different manner, confrontationally. Bangkok, according to DuBois, has the worst and riskiest traffic in the world. There was risk involved in photographing the motorsai as well. DuBois ran out into traffic and crouched directly in front of the motorcycles as they paused at long stoplights. Through this series, DuBois presents several issues including the emerging global economy, class, and national identity.

Michael Patrick Demmy (Johnson City) combines original and appropriated images with wood, iron, canvas, sheet metal, and copper, to create a “library” of visual information in his  installation Narrative Mythological Structures. From this library of information, Demmy says he begins “making connections,
comparisons, and metaphorical jumps beyond its mere subject matter. It is like a word that combines with other words, then other sentences, to produce a complex thought.” As a speaker repeats a word to add emphasis, Demmy repeats images to strengthen connections. In The Fall he repeats the images of two women, a nun in full habit and another with wind blown hair, to contrast the perceptions of good and evil. Earth’s biosphere
provides the visual information for Surface; images of divers, airplanes, swimmers, and fish carry us between strata and from  conscious to subconscious thought.

Carol Golemboski (Ithaca) hand tones silver gelatin prints of items she says “are especially worn, such as old toys and
garments, as well as objects that echo the shape of the human form.” These remnants of life are grouped with beads, shells, leaves, cages, and stuffed birds into allegorical tableaux. She then incises lines and words into the photo emulsion. Striving to create an unsolvable mystery within a believable situation, Golemboski uses nonsensical text to disquiet the viewer and cause anxiety. Like vanitas painting, in which everyday items such as fruit,
flowers, and timepieces are held as emblems of life’s actions and occurrences, Golemboski’s images also relay the inevitability of the passage of time. Golemboski says this work is her response “to emotions that cannot be accurately described in verbal terms,” but seem to relate to life’s greatest fear, death.

We congratulate the grant recipients and wish to thank the 2000 grant selection panelists: Vincent Cianni, an artist and instructor of photography at the Parsons School of Design, and artist Dinh Q. Lê of Ho Chi Minh City, Vietnam.

Doug DuBois (Syracuse) has been photographing his family for the past twenty years.  The photographs submitted by DuBois were made between 2003 and 2005.  The portraits and still lives allude to each family member’s emotional life and private traumas.  They speak to his parent’s aging and subsequent divorce, as well as his sister’s experience as a single parent.  While the work as a whole serves as a chronicle of DuBois’ family, the incidental rituals and experiences of family life remain largely outside the frame leaving the photographs to trace the effects.

DuBois is a professor in the College of Visual and Performing Arts at Syracuse University.  He has exhibited his work and lectured nationwide.  In addition, his work has been published in a variety of books and magazines. His Web site can be found at www.dougdubois.com.