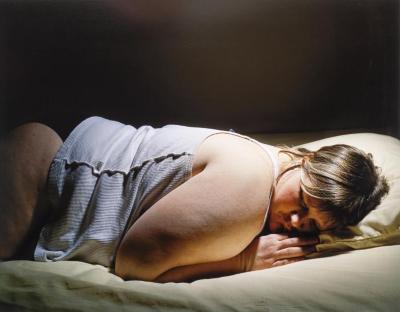 Jen Davis is a Brooklyn-based photographer. For the past 9 years she has been working on her series Self-Portraits, dealing with issues regarding beauty, identity, and body image. She received her MFA from Yale University in 2008, and her BA from Columbia College Chicago in 2002. Davis’ work is included in “reGeneration 2: Tomorrow’s Photographers Today”, which opened at Musée de l’Elysée in Lausanne, Switzerland in June 2010 and continues to travel globally. Davis’ work is included in the inaugural exhibition at Joy Wei gallery in New York City titled “Whose Self-Portrait? The Subject Behind the Camera.” Davis has exhibited widely included group exhibitions at SI FEST: Savignano Immagini Festival in Italy, Museum of Fine Arts, Boston, Center for Photography at Woodstock, Stephen Daiter Contemporary, Museum of Contemporary Photography, Milwaukee Art Museum, and the Galerie Priska Pasquer in Cologne, Germany. Her photographs are in the collections of the Art Institute of Chicago, The Sir Elton John Photography Collection, and The Library of Congress. Her work has been featured in publications including Camera Austria, Aperture, Photography Quarterly, and PDN. Davis is represented by Lee Marks Fine Art. Her work was featured on the website Women in Photography NYC. More images can be viewed on her website at www.jendavisphoto.com.

The pop singer Adele recently made history twice in a very short period of time. Fast on the heels of winning six Grammy Awards, she appeared on the cover of Vogue magazine. Figures from popular culture appearing on the covers of glamorous upscale consumer publications are not new of course. The advertising that drives consumerism often bleeds seamlessly from one medium—music and entertainment, for example—into another, such as the world of high fashion. What was different about Adele’s appearance was that it was heralded as a breakthrough of sorts. Adele is a rising pop diva with both an outsized voice and a larger than idealized physique. It is common knowledge that the majority of women do not look like the svelte and often extensively retouched figures populating society’s visual culture.

Adele’s being selected for the cover of Vogue created a momentary sense that perhaps this unrealistic standard of beauty was being relaxed, and a woman who looked like most women would be held up as a figure of glamour, as well as compel sales of that particular issue of the magazine. Thus it was unsettling when the magazine appeared on newsstands to find someone gracing the cover who few would even recognize as Adele. Adele’s waist was pinched and her ample bosom airbrushed and amplified in a way that left her looking more like a rapturous character from a romance novel rather than the full- bodied singer her fans have come to love. She was all but unrecognizable.

In fairness to Vogue, every woman appearing on its cover, and many within its pages, have been extensively photoshopped. It is par for the course in the constructing of an idealized and entirely unattainable level of absolute physical perfection, not a blemish or wayward pound in sight. Since this idealized beauty is the visual trope around which a multibillion-dollar industry of consumption is built, nothing is ever left to chance, and nothing is ever what it seems. Photoshopped faces are seamlessly (and sometime not so seamlessly) transplanted onto photoshopped bodies. A single body is given the digital treatment and rendered in various ethnic skin tones and a matching face is attached. So one would have to be extremely optimistic to think that the fashion and beauty industry was going to change its visual standards for one recently emerged, plus-sized pop diva, six Grammy Awards notwithstanding.

There is no retouching in Jen Davis’s self-portraits, no photoshopping of her larger-than-svelte body to accommodate society’s unending desire to revel in yet more images that look like few of the women actually populating that society. Indeed Davis uses the camera to describe herself in the fullest sense, since it engages the optical, material, formal, and psychological act of picturing the human experience. It is difficult to look unflinchingly, empathetically, and with interest at another human being through the camera; it is harder still—for all sorts of reasons—when you are also the photographer. All portraits are a performance of a kind. I like to think that the moment of the making of the portrait is one in which the photographer becomes the director, coaxing the subject to a more compelling performance. Who and what they are performing, of course, is themselves, momentarily suspended in the space of being pictured. This process becomes more complicated when the subject and photographer are one and the same. For reasons both practical and psychological it is difficult to move from behind the camera to in front of it and come away with a compelling and coherent photograph, one in which the particulars of the process disappear, leaving something that compels our sustained attention.

But Davis, over and over again, suspends time, makes the presence of the camera disappear, and leaves us with her variously charged observations of one individual momentarily alone with herself in the world. The mundane is here raised to the level of various small dramas. We are reminded in looking at these pictures of how the physical presence of this one woman looking intently at herself mirrors the ways in which so many women look at themselves and see not the photoshopped representations of commercial culture, but something more dimensional, complex, and far more engaging.

Jen Davis was a Light Work Artist-in-Residence in May 2011. For more information on Davis and her work, visit her website at www.jendavisphoto.com.

Dawoud Bey is an artist and writer. He received an MFA from Yale University School of Art and is currently professor of art at Columbia College Chicago.

It is not unusual for artists, including photo-graphers, to turn to self-portraits occasionally. Photographers such as Cindy Sherman have built their career on the practice. When Jen Davis started her photographic series Self-Portraits ten years ago, the images struck a public nerve. The photographs were immediately memorable for their sophisticated style as well as for their distinct subject matter, as Davis bared her struggles with the emotional and physical impact of her weight. Her unusual honesty and vulnerability combined with her understanding for careful composition and delicate lighting invited the viewer into her life beyond normal boundaries of privacy.

One of the most iconic images of her early work is the frequently published photograph Pressure Point, which depicts Davis at the beach looking a little lost in a sea of slimmer bodies. As is common in her images, this photograph communicates a real emotion connected to a place or an action, making it easy to sympathize with her situation. From image to image we see Davis in different scenarios engaging in a world that sets her apart from others.

The title of the series makes it clear that Davis is photographing herself, but the viewer has to discern for themselves the authenticity of the images. These are not documentary images photographed at the actual time a situation originally occurred, but each photograph borrows heavily from real moments and showcases very real feelings. Her earlier images are closer to real moments in their depiction of the awkwardness, shyness, or frustration of a woman with a plus-sized body. They show situations that especially women can easily relate to as universal struggles with body image. Her identity struggles are not so different from many young women who find themselves judged by a male gaze as their bodies blossom into maturity. Yet rather than push back against this gaze, Davis turns to quiet
self-examination.

The fact that these images are self-portraits alters the way they should be understood. Davis is not being watched and judged by these images, and instead is shaping each scenario both as the author and the subject. While she has little control on how society sees her in daily life, she has unlimited control of how she decides to photograph and present herself. It is her active choice to use a frank and self-inquisitive style in photography to examine concepts of beauty, desire, and body image. “Photography is the medium that I use to tell my story through life,” Davis writes in her artist statement. It is “an outlet for revealing my thoughts and opinions about the society in which we live. A society that dictates beauty based on one’s physical appearance.” The level of creative freedom that Davis allows herself has gradually expanded over the years. She began the series trying out familiar scenarios in front of the camera until she could better understand her feelings about them. Since then, self-examination has shifted to self-assertion and finally to self-expression. She is no longer that young student searching to find her place and define her identity, but a woman who claims her right to be included in our understanding
of beauty.

In a pivotal moment in 2004, she started manufacturing scenarios for the camera based on situations she could potentially find herself in. This lead to the photograph Fantasy No. 1, and later to other constructed realities, such as Steve and I. From there she has started to work desire and sensuality into more images, leading also to the separate photographic series Webcam and I Ask in Exchange.

Davis still uses the camera as a tool to help her understand the world around her. A decade into this project, she finds that her body is changing. As in the past, she continues to photograph through every new circumstance and allows the camera to make sense of it all.