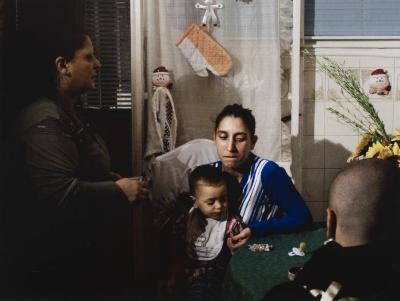 For a more recent CV or bio please visit the artist's website, www.valeriospada.com

'Gomorrah Girl' and 'I am nothing' are the main series produced by the young photographer Valerio Spada. Thanks to the first series, he made himself known throughout the world in 2011, while he has recently brought the second to a close thanks to the support of a grant from the Guggenheim Foundation in New York. Both revolve around the study of the most typical and yet obscure aspects of the major Italian criminal organizations: the Neapolitan Camorra and the Sicilian Mafia. And yet these are not mere reportages, but combine truth and storytelling, diary and theatre, both candid and staged photography. They are cinematographic fiction raised to the level of judiciary truth. And vice versa. Francesco Zanot, Curator

Among all the photo books that are published by photographers themselves —  the so-called self-published books — and by formal publishing houses, every now and then there is this one unique book that makes a mark, a book that few people have seen, but at least those in the industry have heard about. Gomorrah Girl by Valerio Spada is one such book. The first edition was self-published by the photographer in an edition of five hundred copies. If you want to own one, you’ll need to look on eBay and dig deep into your pockets. Deemed a collectors’ item by those who know, it will set you back eight hundred dollars, or more.

But why did this particular book become this big? Why was this particular object singled out? We can trace the history of the book and see what happened when and how it helped its renown. Upon publication it received an important award for self- published books, and the photographer was interviewed by Time magazine. As he said himself, after that interview, his website statistics showed an increase in visitors from one hundred daily before the interview to twelve thousand the day after the interview was published.

Those are impressive numbers, and if a book receives such acclaim, people will want to buy the book. But, why was Time interested in doing an interview? Why did the book win this award? We can ask the editor at the magazine or cross-examine the jury. But let’s not do that; let’s look simply at the images and what those photographs and the book design show us.

The book itself is a combination of two different types of photography that together tell a layered story of the girls living in an area in Naples, Italy, a neighborhood, Forcella, that is under the control of the mafia. On 27 March 2004 a girl named Annalise Durante was accidentally killed when she was talking to her friend on the street, during a shoot- out between two rival mafia families. Spada decided to photograph the documents used by the police for the investigation into the murder of Annalise. These images are reproduced on rough, thin paper and form the main book. The investigation becomes the leading story of the publication. In between every page is added an extra smaller page, with a picture printed on thicker photographic paper. These pictures show the everyday life of the girls in the mafia, or gomorrah, dominated area. Because of
the unusual design, only after some time the second layer, the story of the girls, comes to the foreground. But once it does, it hits home with twice the force, and it is these images that are published here, too.

The first thing I noticed when reading the book was its directness, the lack of pretension. What you see is what you get. And what you get is reality, not made prettier, nor harsher than it is. At the same time, if you read the book, the narrative is strong; as in all good narratives, we are taken on journey, and the characters we meet develop towards a change. Also the story and how it is told reinforce each other. This is a story that needs directness and has to shed all pretense of romance. The life of teenage girls in the middle of the mob dominated areas of Naples, Italy, is not a romantic life, not pretty. It is dangerous, scary, and very tough. The average fifteen-year-old girl from this book has seen more of life than most thirty-year-old women of middle-class America.

This story could have been brought to us as a negative statement: all is bad, and it is hopeless. And, for some, at first sight, it may seem that way. But, stop. Take your time to look at those pictures. Look into those eyes and feel the gaze of these young, strong, beautiful girls. They are indeed that: young, strong, beautiful. Even if they have lived through more than they should have, a hint of innocence remains. These girls are adolescents growing up in a very hard and cold world. But, despite everything, they are girls. Proud, beautiful and ready to take on the world. Like many portraitists before him, Valerio Spada shows us human strength and fragility in one. He shows us the magic of growing up, the power of seduction, the beauty of the smile of a girl. He shows us these universal themes through a story of a place that we have never seen before. And that combination is why I think this work is powerful and worthy of all the acclaim it received.

Marc Prüst is active as a photography consultant, curator, and teacher. In that capacity he edits books, creates exhibitions, teaches and organizes workshops and master classes, lectures, and writes on photography. He advises photographers on how to develop their work and how to market it.