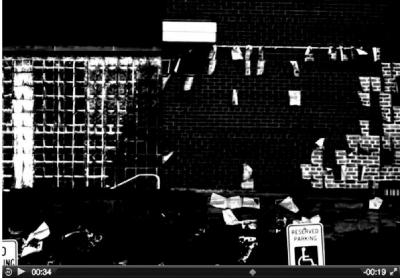 Each year Light Work awards three grants to photographers, critics, or photo-historians who reside within a fifty-mile radius of Syracuse, NY. The Light Work Grants in Photography program, founded in 1973, is one of the longest-running photography fellowships in the United States. The grants encourage the creation of new work and scholarship in Central New York. Each recipient of a Light Work Grant in Photography receives $2,000 to aid in his or her work or research. In its history the program has supported more than 110 artists, some multiple times. With the help of the grant, artists have been able to continue long term projects, print and frame photographs for exhibition, collaborate with others, purchase equipment, and promote their work, among other goals.

Karen Brummund (Ithaca) creates time-based drawings of architecture that become the basis of photographic and video art. Her drawings of buildings are enlarged digitally to the size of the actual structure and are then printed in sections on small sheets of paper. The pages are attached to the building’s facade, thus creating, in Brummund’s words, “interlacing layers of the real and represented.” Brummund also makes photographs and videos of the performative installation as it happens, recording the exchange between the materials and buildings and changes to the installation over time. Brummund is a lecturer at Cornell University and a professor of Studio Art at the University of Rochester. Her work has been exhibited internationally.

Laura Adams Guth (Manlius) submitted large-scale color photographs from her Guilty Pleasures: Little Lolitas series, which closely investigates the macabre beauty and extreme detail of collectable dolls such as those sold on television shopping networks like QVC. Her curiosity in this subject stems from the polarity with which these dolls are generally regarded—while many find them decidedly creepy, others feel strong endearment toward them. Her objective is to illuminate this difference of opinion by skirting the boundaries amid beauty and unease, adulation, and deviancy. Guth is a photographer, multi-media installation artist, and educator. She has exhibited internationally and has received numerous awards, including a fellowship with The Photography Institute. Guth teaches photography at Cazenovia College.

Stephen Shaner (Syracuse) creates images that reference traces of remote incidents. In December 1981, during the Cold War, nearly 1,000 people were brutally murdered in El Mozote, El Salvador. It was the largest massacre in Latin American history. One of the few survivors, Rufina Amaya, accused an abusive Salvadoran military, partly trained and supported by the US, of the massacre, but was ignored. In 1992 a team of forensic archaeologists began to find evidence of and expose the slaughter. Images from Shaner’s El Salvador: Faded Scars series, as well as his other work from different countries, strive to capture selected world events that may once have been viewed as catastrophic but have since begun to fade from memory. According to Shaner, “Long after the nightmare act has occurred, or is even acknowledged, I choose to inventory and recover a past in these places where trauma and death is but the fragment of a memory.” Shaner is a freelance photographer and an instructional design consultant. His work has been exhibited nationwide.

Light Work would like to congratulate all of the winners of the Thirty-fifth Annual Light Work Grants in Photography and extend a special thank you to our judges.

Richard Gray is an associate professor of photography in the Department of Art, Art History and Design and Director of the Center for Creative Computing at the University of Notre Dame, Notre Dame, IN. His artwork explores the relationship between photography, technology, and human identity with an interest in the role science plays in redefining the contemporary self. He has taught photography and exhibited his photographs internationally for twenty-five years.

Gina Murtagh is a freelance photographer, curator, and arts educator. In the past she has served as assistant director of Light Work and as executive director of Sculpture Space in Utica, NY. Since leaving Sculpture Space, she has been an adjunct professor at Cazenovia College, Utica College, and Pratt at Munson-Williams-Proctor Arts Institute. Since 2002 Murtagh has been working to catalogue, exhibit, and preserve her mother’s serigraphs.

Demetrius Oliver creates images in response to specific domestic environments, combining prosaic materials, such as coal, light bulbs, and sometimes food, to reinterpret our perceptions of photography and also of the objects and spaces that we think of as everyday. His work ultimately occupies a space between sculpture and photography as it tempts the viewer to discover the unexpected in the mundane. Oliver’s work has been exhibited widely, and he was an Artist-in-Residence at Light Work in April 2009.