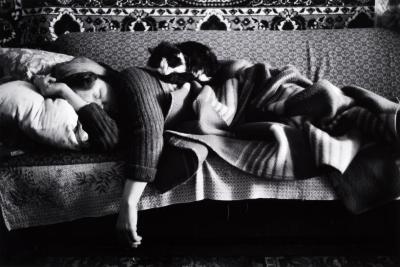 Alexandra Demenkova studied in the photography department of the Union of Journalists in Saint Petersburg. Since 2004 she has been active as a documentary photographer; among the awards she has received is the prize for the best Russian photo correspondent. Demenkova explicitly places people at the heart of her work. “If photography is not about people and done for people, what’s the use of it?”, she says of her work. In 2008 she received a grant from the Prins Bernhard Fonds, and was an artist in residence at the Rijksakademie van Beeldende Kunsten. She participated in Light Work’s Artist-in-Residence Program in 2013.

Russian photographer Alexandra Demenkova discovered the adventure of traveling early in her life. What began with exhilarating, occasional trips to accompany her father developed into a lifelong passion that has taken her to dozens of countries on multiple continents. Her suitcase is always at hand while she is on the lookout for a travel opportunity to the next faraway place. When she found herself without travel plans a few years ago, she decided to visit some of the small communities that friends had told her about. What she discovered were jewels
right at her doorstep.

As part of her six-year project, she visited various areas of rural Russia including villages near Pskov, Tver, Arkhangelsk, and Kursk. Reaching the communities often proved a challenge; many of them are cut off from the rest of the country because of the rough terrain and lack of roads, or simply by the restrictions of poverty. For example, traveling to Unezhma along the White Sea included a daylong hike through the woods. These villages seem suspended in time. In her artist’s statement Demenkova says that she found the experience so startling, she likened it to being on another planet. In these places poverty and human capacity for survival are tightly interlocked. Limited resources have forced people into a way of life that lacks most modern conveniences; yet village life is also rich in culture and traditions. Days are dictated by manual labor, farming, and routines that were established many decades ago.

Few people venture this deep into the rural pockets of Russia. Demenkova’s disarming personality and enthusiasm about new encounters allowed her to ingratiate herself quickly. Her images convey just how comfortable people feel about letting Demenkova and her camera into their lives.

As a photographer, Demenkova is direct and unflinching. She does not dwell on the bittersweet sense of nostalgia that hangs in the air, but neither does she shy away from it. Image by image she compiles an intimate portrait of village life. Even seemingly mundane moments  —  a table set for a solitary meal, water splashing in buckets  —   become subtle allegories. She captures the hardships, the desperation, and the solace found in intense living and heavy drinking. While in the village, she follows people everywhere  —  to their chores, their meals, their jovial visits with friends, even their private moments with their loved ones. Demenkova has an excellent understanding of timing and fortifies her strong instinct for the moment with perseverance. Her 35 mm camera is always close by and rarely not in her hand. As a result of her diligence, the images capture precious moments of life at its fullest.

Demenkova does not stray from her role of an observer. She is the sympathetic spectator  —  there to put on film what might otherwise be overlooked or disregarded. One senses how much these people and the images mean to her. The result is a photo series that is as much about the people in these specific places as it is about the nature of mankind.

While she might look kindly on the villagers, Demenkova in no way romanticizes the people and their rustic lifestyle. Their existence is too harsh, their struggles too obvious. But neither does she express pity. Her images instead follow the moods of the people she photographs.

True to her traveler’s nature, Demenkova shifts her attention frequently even within single villages. By photographing many different people rather than concentrating her series into a lengthy sequence on just one or two protagonists, Demenkova keeps the focus on the community rather than on specific people. This approach makes the figures in her photographs no less dynamic. Each person expresses an original personality that defies stereotypes. Equally, each image is rich in details and suggested narrative.

Demenkova is not the only photographer who has recently discovered the visual abundance of Russian rural life, but few have become so deeply involved with these communities to paint such a vivid portrait. Time and time again, Demenkova uses her camera as a tool to introduce herself into people’s lives. She never loses sight of what provides each moment its significance and what makes each person unique.

The magic of photography has always been its ability to make the ephemeral permanent. With this series of images, Demenkova succeeds at capturing the transitional moment when the unknown becomes the familiar. In the life of this traveler, each photograph represents a welcome and a goodbye. As Demenkova moves on, we follow her to the next faraway place that could be miles away or just around the corner.