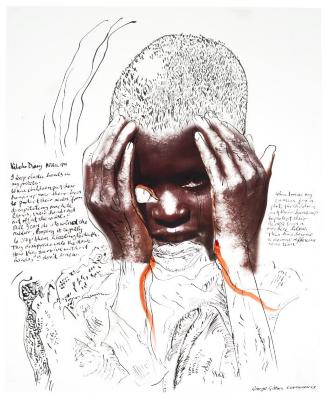 I keep elastic bands in my pockets. When children put their hands up over thei faces to protect their necks from decapitating machete blows, Their hands got cut off at the wrists. All I can do is to wind the rubber, looping tightly to stop them bleeding to death. They disappear into the dark. How they survive without hands, I don't know.

When I raise my camera for a photo the children put thei hands up to protect their necks from a machete blow. This has become a normal reflexive reaction.

George Gittoes is one of Australia’s foremost figurative painters, filmmakers, and photographers. He has won a number of prestigious awards, and has been invited to represent Australia in major international exhibitions. For the last decades Gittoes has been working in areas which are usually the reserve of journalists. His work catches the complexity of individual circumstance, of human frailty, empowerment and survival, against a backdrop of world issues. They are images about both “the moment” and “the big picture.”

Gittoes gives us a powerful, close up response to conflicts best known to us from the nightly news – famine and peacekeeping in Somalia, de mining after civil wars in Cambodia, Pakistan, Afghanistan, sectarian violence in Northern Ireland, ethnic cleansing in the former Yugoslavia, the elections in South Africa which brought Mandela to power, eruptions to the peace process in the Middle East, and the Kibeho massacre in Rwanda, from which the work he is developing at Light Work extends from.

Taking a global approach to his work as an artist, Gittoes works from many locations throughout the world, and bases himself in studios in Sydney and New York. He presents his work in multi media exhibitions which include photography, drawings, paintings, and video installations.

Late last September, I stood with Light Work’s master printer, John Wesley Mannion, gazing at several of George Gittoes’s freshly made Rwanda “synthages.” They were tacked up at odd angles on the print room’s display wall. Gittoes came here for a residency last March in large part to work closely with Mannion on this new series. Now the Australian was back briefly to do a gallery talk for the resulting exhibition, Nothing is Enough (August 19 – October 25), and to accept the Bassel Shehade Award for Social Justice from the Syracuse International Film Festival. Meanwhile he was making more synthages.

“Writing about this would be hard,” Mannion observed after a silence. “Yes,” I said, “like trying to cram the flame back into the match.”

Mention Rwanda’s genocide and we probably think first of 1994, when a million Tutsi and moderate Hutu died, chased down by machete-wielding Hutu mobs. A year later, bodies still clogged the lush green nation’s rivers and churchyards. But with a fragile UN-monitored cease-fire, the new, Tutsi-dominated regime ordered the IDP (internally displaced person) camps closed. The largest, at Kibeho, held 120,000 people — real refugees and, in hiding, remnants of the murderous Hutu militias, the Interahamwe. On April 22nd, the Rwandan Patriotic Army surrounding Kibeho began several days of slaughter. There under UN auspices to act as medics and constrained from intervention, thirty-two Australian troops could only treat the injured and later count the 4,000 dead (official figure, low).

With them was George Gittoes, who had previously begun documenting Australian military peace-keeping. Gittoes has seen much war over thirty years: Cambodia, Nicaragua, Philippines, Somalia, Palestine and Israel, Mozambique, South Africa, Western Sahara, Lebanon, Bosnia, Tibet, the North of Ireland, East Timor, Bougainville, Iraq, Pakistan’s tribal belt, and Afghanistan. He calls Rwanda “by far the worst,” and estimates that a third of his work since grapples with what he saw.

Each synthage begins with photographs, drawings, and diary entries that Gittoes made at Kibeho. He makes a new ink drawing on large-format photographic paper, often adding hand-written diary text and blood red splashes. On top of this, he and Mannion print reworked portions of the original photograph. Rod Pattenden has usefully placed Gittoes’s work in the tradition of the grotesque, arising at times of extreme social displacement (Visual Theologies, 2009), but Gittoes is a breathtaking draftsman (just look at Mother, Daughter and Oblivion), and it’s this drawing that shows through the photo elements. “Collage” would be the wrong word: these soft-edged portions of anatomy seem to burn through the paper’s surface from below, as if conjured back into being by his drawing’s line itself. Here we see the filmmaker too: imagine celluloid burning.

In his gallery text for Nothing is Enough, Gittoes names the challenge of this work: “the lives I had seen blinking out” as he sat with the dying, drawing them. One woman, Imaculee, “flicker[ed] between life and death like a faulty neon light.” In Witness to War, his first major U.S. show, at Houston’s Station Museum of Contemporary Art in 2011, Gittoes articulated for Devon Britt-Darby’s catalog note that “photography is not enough” for what’s required between artist and subject in such extremity, when only the seemingly archaic slowness of drawing suffices. Almost a rebuke to its swift intrusion, Rubber Bands depicts a child reflexively fending off Gittoes’s raised camera, which she associates with machetes.

The synthages are not entirely new images. His painting The Preacher won Gittoes his second Blake Prize for Religious Art in 1995; its subject reappears here in Congregation. In 1997, Gittoes exhibited ten massive paintings based on Kibeho as part of Documenta X in Kassel, Germany (see Gavin Fry, 1998); now each one returns, transformed, as synthage. For that matter, the original photos aren’t hard to find. At least three Australian veterans use his photos in their memoirs of peace-keeping (Paul Jordan, 2012; Kevin O’Halloran, 2010; Terry Pickard, 2008). So one can learn, for example, that the two UN troops here were Lance Corporal Miller and Private Jones, or that the single soldier with “Night” scrawled on the back of his helmet was a Private Timms.

Later in this series, Gittoes begins repeating some images in successive synthages as a kind of visual echo, a calling of spirits. Some poke through time from other conflicts (Night is a character from Gittoes’s recent Afghan Book of the Dead). Gittoes draws Rwanda soldiers as skeletons to comment on their grisly occupation’s cost, but also to evoke the Australian Aboriginal “X-ray” drawings by hunters who knew what their quarries’ internal parts looked like. Such loosening of reference makes way — Devon Britt-Darby again — Goya-like, for “the witches in the trees.” Here is Gittoes’s take on Paul Kagame, Rwanda’s defense minister in charge of the army during Kibeho and her current president — look closely at the scrawled text — as a zombie “feeding on souls . . . the Vampire King — Count Dracula himself.”

Nancy Keefe Rhodes is a writer, editor, and curator who covers film, photo, and visual arts.

George Gittoes lives in Sydney, Australia, and completed his residency at Light Work in March 2013.