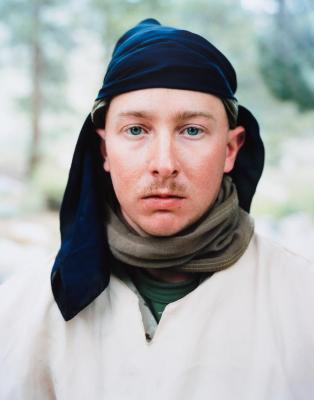 Born and raised in Chicago, Claire Beckett earned a BA in Anthropology at Kenyon College. She then worked as a Peace Corps Volunteer in Benin, West Africa, before earning an MFA in Photography at Mass College of Art. Her photographs have been featured in solo exhibitions at Carroll and Sons, Bernard Toale Gallery, the University of Rhode Island, and the Wadsworth Atheneum and in group shows at Mass MoCA, the Haggerty Museum, the Photographic Resource Center, Silver Eye Center for Photography, the DeCordova Museum, the Noorderlicht Festival, Fotodok in Utrecht, and the Inside Out Museum in Beijing. She is a recipient of an Artadia Award, a Blanche Coleman Award, and a Massachusetts Cultural Council Grant. Her work has been reviewed by Art Forum, The Boston Globe, and NRC Next, and featured by Public Culture, and Cool Hunting. Claire Beckett resides in Boston, where she is a faculty member at the School of the Museum of Fine Arts. Claire Beckett is represented by Carroll and Sons Gallery in Boston.

For her latest series, The Converts, Claire Beckett focuses on people who weren’t born into Muslim families but who have chosen to convert to the Islamic faith. While her subjects do not have to be American, the project is ultimately about Americanness. Beckett has always been keenly aware of what it feels like to be different. She grew up in an Irish Catholic neighborhood as an Irish girl but not a Catholic one. She also served as a Peace Corps volunteer in Benin where she was trained to assimilate as completely as possible even though she was clearly an outsider. In The Converts, Beckett explores the impulse to pursue a path that inevitably sets one apart from the mainstream, despite our society’s claims of pluralism. This work follows her Simulating Iraq project in which she photographed people pretending to be Muslim or Arab as part of role-playing exercises at U.S. military training centers fabricated to look like Iraqi villages. The same ambiguity that she sensed when working on Simulating Iraq (see her portrait of a Marine with blue eyes and a French manicure wearing an abaya and head scarf) resonated for Beckett when she saw real people making religious conversions that transform not just their spiritual paths but almost every detail of their everyday lives. Imam Suhaib Webb is the spiritual leader of the Islamic Society of Boston Cultural Center, the biggest mosque in New England. Imam Webb is a tall, burly, blue-eyed blonde preacher’s grandson from Oklahoma. In setting up her portraits, Beckett isolates her sitters so that the environment contains but doesn’t compete with them. Imam Webb is portrayed in a kneeling pose, but framed from waist up, his intense eyes directed slightly upward. As demonstrated here, Beckett’s photographs hint at the nature of her project without being religious or reverential.

Beckett’s project captures moments of disjuncture that reflect the often uneasy co-existence of diverse cultures and belief systems. This is true of Teacher’s Notes  (the Halal and the Haram) in which the lined notebook paper, spelling mistakes, and grammatical errors do not detract from the crucial lesson of what is lawful and what is forbidden under the teachings of Islam. In The Ninety-Nine Names of God, Beckett photographs a commercially produced poster depicting the names by which God is commonly known as described in the Qur’an. Commonly seen in Muslim homes, mosques, and schools, this poster hangs in the floral wall-papered prayer room of a house in upstate New York. The image captures a hybrid identity — small-town America and the embrace of a new faith — and, according to Imam Webb, perfectly encapsulates the experience of conversion in America. A similar crisis of identity appears in Anabel’s Visit to Her Husband’s Homeland, which depicts an album of professional studio portraits of Anabel, a young Colombian woman who converted to Islam after marriage, with her husband and their two children — the children in Arabian-style prince and princess costumes — against a Disneyfied backdrop depicting a pastoral scene with frolicking woodland creatures.

Although Beckett did not have a religious upbringing, her childhood was steeped in Catholicism, and many of her visual references are Christian. Because these motifs evoke religion for a lot of Americans, they are also a point of reference for the converts who are her subjects. Iconic Christian images from the history of art are a particularly fruitful resource for Beckett’s photographs as seen in the modified Madonna and child composition in Patricia and Her Son Yusuf. In another image, Lisa stands in front of a printed canvas from IKEA that appears to radiate a heavenly light upon her, recalling the Annunciation when the angel Gabriel tells Mary that she will bear the son of God.

Beckett’s primary tactic in pursuing her project is to remove barriers: “I dress modestly. I don’t say inflammatory things. But I answer truthfully. I tell them who I am, and what I’m doing.” For the past year, she has been attending a weekly class for female converts as a way of engaging with the Muslim community and accessing information that helps her understanding and interpretation of Islam and the process of conversion. Kathryn is one of the women she met in class. In Beckett’s portrait, she wears a marine blue abaya with graphic floral patterns and a light blue niqab that veils her face. Her power and confidence are easily conveyed by her eyes, the only part of her body that is visible. Yet, Beckett’s title, Kathryn on Her First  Day as a Niqabi, and the subtle irregularities in the way Kathryn has affixed her niqab allude to the deeper struggle of creating a new identity as a Muslim and learning how to navigate that process. For Beckett, “That not sure [aspect] is a big part of the project . . . That’s what’s fascinating to me.”

Michelle Lamunière is the John R. and Barbara Robinson Family Assistant Curator of Photography at the Harvard Art Museums.

Claire Beckett lives in Boston, MA, and completed her residency at Light Work in June 2012.