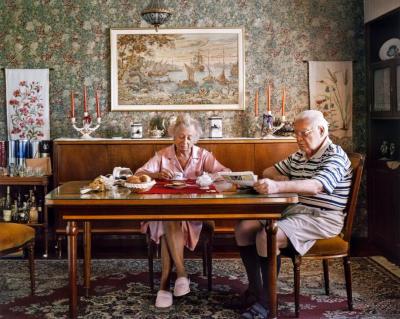 In her series, Archipelago, Yolanda del Amo explores the quiet but ever-present dramas that transpire between people who are present within the same photographic frame. We must rethink our immediate assumption that the co-existence of figures in an image presupposes a certain relationship between the people pictured. In her elegant and stoic photographs, del Amo plays with the ambiguous dynamic that grows between her subjects, who could be friends, couples, siblings, or even strangers. During her residency, del Amo scaned her 4 x 5 and 5 x 7 negatives and then experimented with print scale using our large-format inkjet printers.

Yolanda del Amo holds an M.F.A. from the Rhode Island School of Design. She also received a BS and MS in mathematics from the University of Cologne, Germany. Her work has appeared in both group and solo exhibitions in venues including Hudson Franklin Gallery in New York and the Barbara Walters Gallery at Sarah Lawrence College. Del Amo is an Associate Professor of Photography at Ramapo College of New Jersey. She was an artist-in-residence at the Spanish Academy in Rome in 2010.

An extremely pregnant woman leans back in her chair, baring her naked belly without acknowledging it. Cropped sharply by the composition of the color photograph, the features of her face are just beyond the viewer’s reach. The sliver that can be seen suggests she is gazing out of the window next to her. Meanwhile the presumed father of her child looks on pensively. Sitting nearby at an immaculately clean marble breakfast table, he reveals few emotions as he quietly considers their beckoning future. This domestic setting is arranged with the care of still life paintings by the Great Masters; though the photographer softens the formality introduced by the nicely arranged fruit, designer cups, and meticulously decorated room, with the casualness of bare feet and relaxed body posture. Details such as his wedding ring anchor the image in domesticity, but it is her forlorn gaze toward the window and the life outside that interrupts the tight compositional center of man, fruit, and belly that define their interior world.

Time is of no consequence to the photograph. Not quite at a standstill, life seems to have slowed down into one long moment. Silence prevails as if everything had already been said, at least for the time being. One can imagine the subdued sound of quiet breathing, the ticking of a clock, or the muffled rumbling of distant traffic. But none of this breaks the spell of the image. Spanish-born photographer Yolanda del Amo knows what she is doing. She is an expert at creating scenes that depict people who are equally close in their shared physical space as they are distant in thought and emotion. Brought together in what has been called “sustainable silence,” the figures in
del Amo’s photographs elude easy interpretation. These protagonists, who may be couples, may be related, and definitely know each other, are placed together, yet deny the viewer the clarity brought by interaction and emotional response.

The people in her photographs never quite amalgamate into a whole. In fact even where figures are touching, they seem remote and distinctly separate. They never become husband and wife, grandfather and granddaughter, brother and sister. None of the people in del Amo’s photographs blend into socially recognized constructs, rather they remain man, woman, child.

The overall atmosphere never shifts into societal despair. This solitude enjoys company. The people may be locked into their own set of thoughts in their own little sphere. But none of them express discomfort or animosity. Little items around the room evoke a warmth and home life that balance out the void of activity and quiet contemplation, and suggest that the silence may not be a permanent one. Another moment, and the woman might turn to the man with a smile. With one quick shudder he might shake himself loose from his thoughts to jump onto his next task.

What makes del Amo’s images captivating is how natural and real they feel. They are in fact a mixture of real and constructed. Just as a writer may take aspects of real people and weave them into his or her stories, del Amo photographs people she has gotten to know well and recomposes them into invented narratives. She photographs people in their own homes, thereby beginning with something real, but rearranges and restages their lives into something of her making. She may change their clothing, remove or add furniture, bring in additional embellishments, or get rid of them all. The end results are familial images that are fictional portraits of real people.

Del Amo began photographing for the Archipelago series in 2004. Six years later the images in the series continue to evolve. Her series, which she intentionally keeps culturally ambiguous, has taken her to Spain, France, Germany, Argentina, the United States, and most recently to Italy. She has changed camera formats from her comfortable 4 x 5 to the new dynamics of 5 x 7. And she has stepped outside to photograph her groupings in newly defined exterior settings such as beaches and parks, allowing the different planes of the open landscapes to expand the possibilities of her compositions.

This series set out to examine what happens when two people share a space and emotionally connect or disconnect. Consistent with the project’s beginnings, del Amo’s powerful photographs exist in the absence of definable activity. They describe people caught in deeply private moments of inner reflection. Yet instead of withdrawing physically, they choose to share this moment with another person without the need to engage with them. As a result, del Amo’s images are wrapped in a calm silence and acceptance that suggests the slowing down of life into an expression of undiluted humanity.

Yolanda del Amo lives in New York City and makes her work all over the world. She participated in Light Work’s Artist-in-Residence Program in August 2009.

Lives lived together can grow closer or more distant in the vast space opened up by silence. In moments when words become superfluous, thoughts, reactions, and feelings do the work of keeping people together or driving them apart.

Artist Yolanda del Amo explores the tender terrain between people in her series Archipelago, a sophisticated suite of images that brings the importance of these moments of emotional connective tissue to light. She photographs family, friends, and acquaintances in various settings around the world as they perform scenes that suggest a universal narrative of human relationships.

In naming her series, del Amo uses a metaphor that describes the turbulent nature of intimacy. Powerful forces deep below the surface of the earth form archipelagos, which are chains or clusters of individual islands. These unstoppable natural forces push up and out to create distinct bodies of land that are grouped together to form a larger whole, existing at once by themselves and also connected to each other.

Concerned with the geography of human interaction, del Amo depicts the natural forces that lie just below the surface of relationships between people—their conflicting needs for intimacy and connection, independence, and individuality. In Archipelago, these competing forces seem to have reached a temporary stasis.
Del Amo's beautiful images show people completely submerged in their own inner worlds even when they are in the presence of others, in private rooms and public spaces.

Rendered in the exquisite detail made possible by using a view camera, the images in
Archipelago invite close inspection of seemingly private moments. On the surface the photographs appear to utilize a direct approach that underscores the everyday. However, the artist structures each image with a subtle formality, creating a mixture of reality and fiction, that builds a stage upon which dramas could be imminent or recently passed. In del Amo's photographs, people gather at immaculate breakfast tables, uncluttered living rooms, and pristine parks. These regular places attain a mute theatricality through the absence of detritus that collects in everyday life. In this careful staging,
del Amo creates an elegant visual metaphor for the silence enacted by her subjects.

The narrative dramas implied in Archipelago are insinuated by a masterful use of glance. Rarely do the subjects look at each other or beyond the frame, and when they do, the people who populate these rooms and landscapes appear to stare past any potential audience toward a distant point of reference. This use of glance forges an emotional pressure that pushes outward from the picture
plane and at the same time inward, toward an unspeaking interior world. The players give no hint about how the silence might resolve itself if at all; their faces remain ambiguously stoic allowing viewers to draw their own conclusions about what the next act might be.

In photographing people of all ages and in combinations of twos, threes, and sometimes fours, the artist touches on the universality of this constant push and pull between public and private, intimacy and distance just below the surface of
human connection. By identifying the people in her photographs only by their first names, del Amo leaves the relationships of her subjects to each other deliberately vague, which makes her images all the more personal and far reaching. Each photograph represents a fragile time in any relationship when people—whether they are mothers and sons, brothers and sisters, husbands and wives, lovers, or simply friends—momentarily live alone, together.

John Donne wrote that no man is an island.
In Yolanda del Amo's images, the island has been reimagined as an archipelago, one whose many sided shores wax and wane with the coming tides.