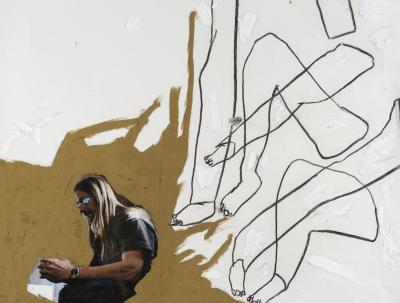 Dani Leventhal creates videos and drawings that unearth a curious beauty of everyday life. In 2003 she received an MFA in sculpture from the University of Illinois at Chicago and in 2009 an MFA in film/video from Bard College. She has screened her work at The Rotterdam International Film Festival, The Gene Siskel Film Center, PS1, Ann Arbor, Cine Cycle and Anthology Film Archives. Leventhal has been the recipient of numerous grants and awards, among them the Wexner Center Film/Video Residency, the Milton Avery Fine Arts Award, the Astraea Visual Arts Grant and the Post MFA Fellowship at The Ohio State University. Her work is in the permanent collections of the Museum of Modern Art in New York, The University of Illinois at Chicago, and Yale University in New Haven, CT.

that which someone shows when he sees the beauty we have down here and is reminded of true beauty . . . he is called a lover . . . they are beside themselves, and their experience is beyond their comprehension because they cannot fully grasp what it is they are seeing.

Dani Leventhal’s video and related suite of drawings, Platonic, mark an interesting shift in the work of this multimedia artist known for the visceral, even “haptic,” quality of her videos. (See Chris Stults, “The Multitude of Visible Things: The Videos of Dani Leventhal.”) There is still plenty of the viscerality for which Leventhal is known, bearing witness to the body and its finitude: pet cats foam at the mouth without explanation; a female figure lies prone, crotch exposed, on a rock above a raging river; a man sleeps hunched over the steering wheel of his truck along a dark stretch of highway. But alongside these moments of vulnerability and intimacy, there is something not just dangerous, but sinister: the suggestion that even our most immediate perceptions are, in fact, misperceptions.

The titular reference of “Platonic” suggests both the eponymous philosopher’s metaphysics of ideal Forms, which simultaneously exist outside our perceptions and yet give rise to them, and the related meaning in common parlance of non-romantic love. Throughout the piece, Leventhal considers from various angles the entanglement of perception and desire.

Platonic is organized around the real- time telling of three apparently unrelated, autobiographical stories of love and catastrophe. Formally unique in Leventhal’s work, they transpire in static long takes, offering a respite from the jarring montage that surrounds them. But, as we discover, narrative hides its own violence: a confused adolescent, worried he has sired a centaur, sets out to kill a mare; a recovering mother is nonplussed to learn her little boy believes his junkie dad is a superhero; and geometric shapes twirl in space as a disembodied voice relates the disappearance of a loved one after a car crash.

It is not by chance that there is trauma here. In some way, each story is about a misperception of the other and the other’s insoluble opacity — and not just any other, but specifically that most privileged of all others: the beloved. The gritty realism of the mother’s misadventure with a drug dealer morphs with breathtaking suddenness into a child’s fantasy. In this most fraught of relational realms, misrecognition is, itself, a form of trauma, and desire, in turn, has a role to play in (mis)perception.

The exploration of perception and its shortcomings also manifests in a recurring motif of technological mediation throughout Platonic. This is most directly represented in clips that are videos of shots of projections of videos. Sometimes these layers are apparent only through a subtly disturbed topology of the image: a curve or a faint keystone; sometimes through a muddiness of color and contrast; sometimes through the visible reflection of the artist and camera in a screen; and sometimes because the projected image occupies a very small, peripheral portion of the frame, most of which is left in darkness.

These projections immediately suggest various associations: memories, hauntings, homunculi in the brain box, etc. But, however we interpret them, they always lead us inexorably to imagine some original, unmediated viewing or listening experience to which we can never have access. These rectangles of light evoke more than a passing resemblance to the shadows on the wall of Plato’s proverbial cave: perception as bad camrip; or inversely, the Real as the black box of closed circuit surveillance.

The arc of Platonic moves us almost imperceptibly away from the visceral shocks of Leventhal’s characteristically elegant and violent montages toward a progressively more detached representation of reality —  fast cuts and crisp contours give way to a dream-like visual order. Even the signifiers of immediacy — a sequence set in a South American household teeming with life in all its messiness; another in which a woman, seemingly unaware of the camera, is observed at a roadside carnival — start to betray this dreaminess: the laughter of the children echoes eerily; the candy-colored lights of the carnival ride twinkle in soft-focus. It is as if the power of the desire for beauty has gradually warped perception into a sort of delirium.

This points to a key tension of the piece — and perhaps, of Leventhal’s work in general — one that also haunts Plato’s own writing: that the perception of beauty that manifests itself as desire and love is at once our most direct means of accessing the Real — whether imagined as transcendence or immanence — and at the same time is the distance that separates us from what we see. To look is to desire, to desire is to misrecognize . . . and to love is a form of madness.

Anneka Herre is an artist, curator, and art educator. She currently teaches in the Transmedia Department of Syracuse University and is the director of Urban Video Project.

Dani Leventhal lives in Columbus, OH, and completed her residency at Light Work in June 2013.

Urban Video Project and Light Work are pleased to announce the exhibition of Platonic by Dani Leventhal at UVP Everson from September 12 – October 26, 2013.

Leventhal completed Platonic during her 2013 Light Work artist residency, during which she edited, shot additional footage, and created a series of related collaged drawings.
The UVP Everson exhibition will feature a special cut of Platonic from September 12 – October 26. The “uncut” version, set to premiere at the New York Film Festival this October, will be screened during Leventhal’s artist talk, along with other selections from her body of video work.

Leventhal will give an artist talk in the Everson’s Hosmer Auditorium on Thursday, October 17 at 6:30pm.

Reception will follow on the plaza at 7:30pm. Baked goods & coffee provided by Recess.

In Leventhal’s Platonic, geometric specters twirl in space; pet cats foam at the mouth; a little boy mistakes his junkie dad for a superhero; and a confused adolescent worries he has sired a centaur. “Platonic” references both the ancient philosopher’s metaphysics of ideal Forms, which simultaneously exist outside our perceptions and yet give rise to them, and the related meaning in common parlance of non-romantic love. Leventhal trains her searching lens on the distance separating bodies, moments, and perspectives. The result is a study in the awkward gaps between appearance and reality, seeing and understanding, desire and its object.