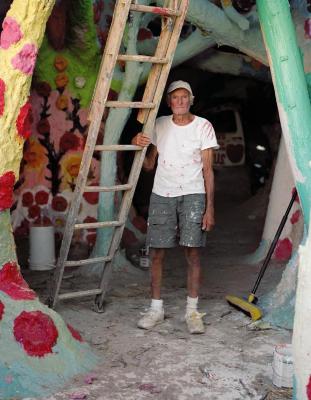 Justyna Badach was born in the Soviet Union and now lives and works in Philadelphia, PA. She received an MFA in Photography at Cranbrook Academy of Art in Michigan. She was a Light Work artist in residence in May 2012. Badach has exhibited her work in numerous solo and group shows, nationally and internationally. Badach’s photographs have been collected by a number of institutions and corporations including the Museet for Fotokunst Brandts, Denmark and the Portland Art Museum, Portland, OR. Justyna Badach is represented by Gallery 339 in Philadelphia, PA.

Through photographs and texts, Justyna Badach examines the ways specific relationships, or the lack thereof, define us. In present-day culture we are continually encouraged to belong to another person or group in a meaningful, socially sanctioned way in order to secure acceptance. People are rarely unaffiliated, and when they are — jobless, homeless, or single — they become stigmatized within society. While unmarrieds may be subject to isolation, single men in particular are considered somehow maladjusted.

It is into this uncharted and sometimes uncomfortable marginal space that Badach enters with her camera. In her series Bachelor Portraits, begun in 2003 and now consisting of more than forty photographs, she explores her single male sitters’ physical and psychological worlds. She has traveled throughout the United States to meet these men, posting ads about the project online and on supermarket bulletin boards. The resulting portraits are made during the single visit that Badach conducts with each bachelor. It is therefore surprising that these individuals, typically considered shy or alienated, reach out to a stranger and reveal so much of themselves to the photographer and, in turn, to us.

Thoroughly cognizant of artistic con­vention and history, Badach applies this knowledge to her compositions but re­interprets the traditional dynamic of dominant male artist and subordinate female model. The men who lounge languidly on beds are not the seductive, nameless odalisques who populate paintings by Ingres or Matisse. The bachelors who bathe in exquisite light that pours through windows are not the anonymous women who haunt Edward Hopper’s canvases. Badach gives each bachelor a voice and points to her own sense of curiosity through the accompanying texts, allowing the models to become dimensional and the artist to be vulnerable in their presence. She describes her photographs as collaborative events in which two strangers create a composition together. As she poignantly states, her words “reveal what the camera cannot, what the men said, and what I felt.”

The wallpaper and paint, furniture, artwork, and knickknacks that populate each composition help describe the men and the domestic worlds they have created for themselves. No longer unremarkable “bachelors,” John, Charlie, Biff, and Robert become individuals within these spaces. They stand in tidy kitchens, recline on sofas, and sit on stools. They pose — usually clothed but sometimes nude — with pets or products of their hobbies. They are unique and complex and intriguing rather than objects of culturally induced pity or suspicion. Indeed, in the 2009 photograph John, the man who sits at the edge of his bed while smartly dressed in a sport jacket and trousers has surrounded himself with art. Badach writes, “Everything about him exuded patience and care.” Perhaps the intimacy of the bedroom space and the lack of a bed skirt, which allows the bare box spring mattress to peek through from under the richly hued covers, hint at John’s missing relationship. Perhaps a lover or spouse would have tended to this detail. Or perhaps we search too intensely for signs of loneliness brought on by bachelorhood.

Though the link between all of Badach’s subjects is their bachelor status, sexuality and intimate relationships are not necessarily central to the narratives and at times are not brought up at all. The term “bachelor” has been understood for centuries to mean an unmarried man in the traditional, male- female structure of marriage, but in these photographs heterosexuality is not implied to be the norm or the preference. In the text for Herb, 2009, Badach refers to a past partner, but does not specify a gender, adding greater depth and nuance to the photograph.

In Badach’s 2010 portrait of Boyd, a man seated in his camper lifts his shirt to show us a vertical scar running from the top of his chest to his stomach. The text describes a painful past and a difficult present. Boyd is linked to a father who abused him, a mother who did not protect him, and ten siblings who are all but estranged. The physical scar, slashed across his heart, represents corporeal as well as emotional pain. Do those early wounds, not visible to the eye but deeply imbedded years ago, prevent Boyd from maintaining an intimate relationship? Or is he, like all of us, a complex individual who deserves more attention than a dismissive societal label allows? Badach’s photographs peel away the cultural norms, showing us the profound humanity which rests just underneath her sitters’ surface.

Julia Dolan is The Minor White Curator of Photography at the Portland Art Museum in Oregon. She received her PhD in art history from Boston University.

Justyna Badach lives in Philadelphia, PA, and completed her residency at Light Work in April 2012.  www.justynabadach.com

People turn to terrorism because they know they cannot wage war, so they opt instead to produce a theatrical spectacle. Terrorists don’t think like army generals; they think like theatre producers.

I have walked in the mountains on clear winter afternoons when the landscape I discovered in the camera’s finder was, in its spectacular independence of us, frightening.

In her new series, Land of Epic Battles, Justyna Badach creates large, hand-made casein dichromate prints using film stills from ISIS training videos. For a year she experimented with darkroom techniques before discovering a 19th century process that would allow her to use gun powder as a pigment. The resulting incendiary prints initially look like antiquated documentation of Middle Eastern sites and landscapes.

This process requires multiple steps of contact printing digital negatives to heavy-weight watercolor paper, with each layer of pigment individually applied, registered, exposed and washed. The unpredictable reaction of the gun powder with the casein on this paper results in a grainy texture that adds a layer of abstraction more akin to the language of drawing and painting than photography. Rather than using images of carnage and gore, for which ISIS videos are infamous, Badach’s edit reveals a vast, enduring, and majestic landscape that dwarfs the players in the conflict and exposes the futility of war.

Land of Epic Battles continues Badach’s ongoing interest in masculinity and the machismo of Hollywood films and media. As a child Badach emigrated from Poland and learned to speak English by watching American TV. Fascinated by the deeply coded American cinema, she later created Epic Film Stills, a project that explored how classic Westerns such as Wyatt Earp and Young Guns glorify the violence of American colonialism. In this series she also focuses on the landscape, which echoes the romanticized version of Manifest Destiny and its violent ideology that she first recognized in American Westerns. Indeed, such echoes of Western movies may provide the most ready means by which many Americans can make sense of Middle Eastern conflict.

In describing this project, Badach says, “My work examines the transmutation of history and repackaging of violence through appropriation and re-contextualization of images derived from films created for a male audience. Land of Epic Battles focuses on the hyper-masculine world of ISIS recruitment videos that have grown out of the social and cultural voids that mark this moment in time. I focus on the sites and detritus that form the background of ISIS’s online digital streams and their potential to suggest themes of volatility, terror, paranoia and bodily destruction.”

Besides armored vehicles, the black ISIS flag, artillery, and explosives, each ISIS cell includes a media-savvy creative, equipped with video camera, microphones, laptop, and Final Cut Pro, who carefully documents the destruction wrought by this cell and disseminates this material on encrypted websites and YouTube. Reality TV, DIY citizen-journalism, and video games (specifically Grand Theft Auto) have clearly inspired these works. ISIS videographers carefully edit the action with rousing music, and linger in slow motion over point-blank gunshots, beheadings, and crucifixions. Voice-overs promise a life of respect, power, comradery, and victory for young men who have been brutally marginalized and stripped of culture.

Perhaps we can see the current resurgence of older photographic processes like Badach’s resurrection of dichromate printing as part of the reaction to the ubiquity of photographic images today. Instagram posts 400 million photographs every day and each one gets at most a viewing that lasts a few seconds. Reintroducing viewers to a handmade, tangible unique print is a way to slow down photography for its makers and viewers alike. Badach certainly slows us down by asking of us a seemingly contradictory task: to take in both the beauty of the dichromate process and the sublime and terrifying beauty of the landscape in which ISIS somehow appears small and transient.

Indeed, the horror of Badach’s content creates a tension that destabilizes and threatens to undermine her work’s underlying romanticism and the beautiful tonalities of her prints.  Hovering drones and helicopters, a startling mushroom-like cloud over the city of Palmyra, and furtive figures moving through the landscape all feel cinematic in scale, sweeping scope, and blurred movement. But as the source of these images gradually registers, we realize this hero’s journey is playing out in real time with far-reaching and devastating consequences.